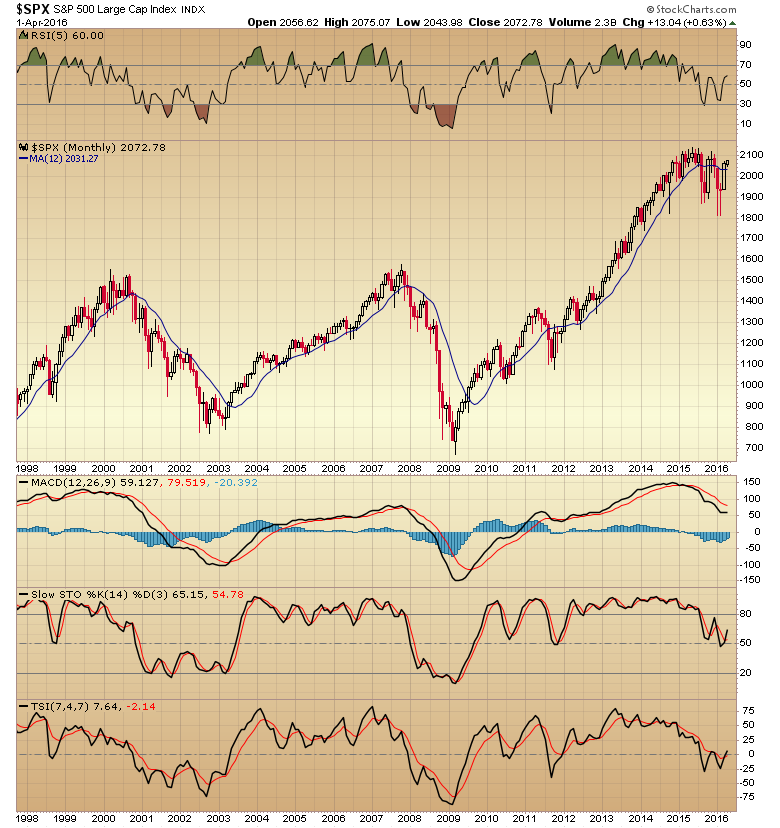 No bear market: another confirmation.

During the last two bear markets once price fell below the 12 month moving average it never recovered until the bear was over. As you can see in the above chart, price has already recovered the long term average. All of the monthly indicators are turning back up. This was never going to be an extended bear market like so many analysts have been trying to call. It’s simply too late in the 7 year cycle for that. Stocks: this is no bear market.

You’ve watched for the last year as I’ve guided traders through the markets spotting the major turns correctly over and over as virtually every other analyst has consistently gotten it wrong, or missed the moves because they were too timid to make a directional call. Let’s face it, by the time one gets confirmation of a move it’s about time for the move to reverse. So all you accomplish by waiting for these analysts to give you the OK is to get caught at the top of the rally, or the bottom of the sell off.

This is not how I trade. I try to call the bottoms in real time so that traders can get on board early and actually make some money off the rally instead of sitting on the sidelines and watch it pass you by. You’ve seen over and over that the technical analysts have never caught one of these major turning points. Why? Because charts are a record of what’s happened in the past. They can’t tell you when the trend is about to change. At bottoms the charts will always say that the trend is down, and at tops the charts will always say that the trend is up.

You need different tools to time these big turning points. You need cycles & sentiment. Technical analysis alone is never going to produce what you are looking for. If you don’t find a way to trade opposite your emotions, and your charts you will never master the the art of buying low and selling high.

I’ve been correct on my intermediate calls and macro calls over and over, and I can say with a great deal of confidence that I’m going to be correct again on my stock market call and especially on the biotech call. You’ve got to quit listening to the perma bears and the trolls. they are never going to make you any money. Let’s face it, the world can only end once. What’s the point of betting on it? On the other hand we have 5,000 years of history proving that mankind always finds a way to overcome its problems. I’m going to guarantee we will this time as well.

You’ve got a very rare opportunity to get on board right at the bottom as the next leg of the biotech bull is beginning. Remember, I said the same thing about miners 3 months ago. No one wanted to believe me then either. The few that did made an insane amount of money. IBB is bouncing off major support and is more oversold than any time since the bottom in `09. Folks, this is the very definition of buying low. Remember, the time to buy is when you are most scared. 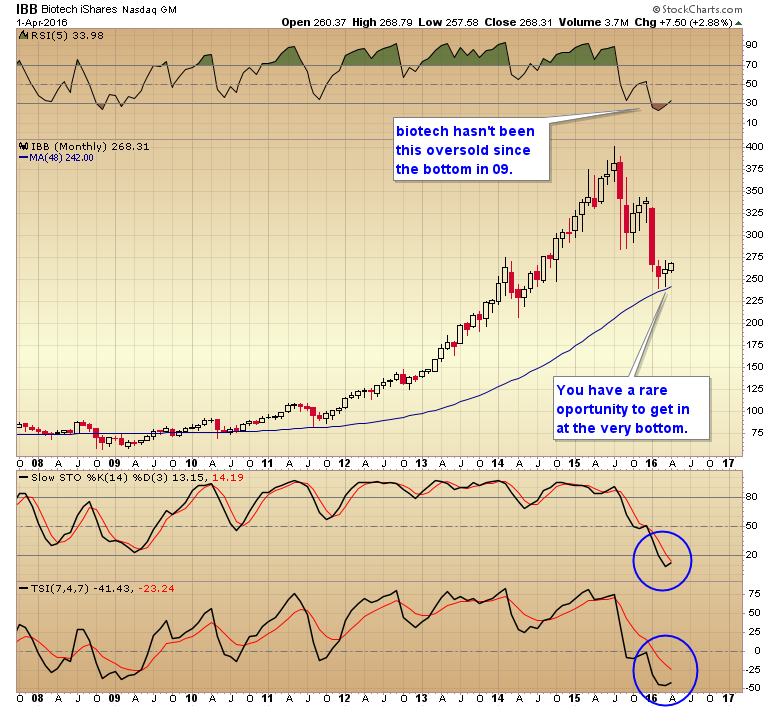 I want to take as many people with me as possible during the next phase of the biotech bull. If you are tired of watching these moves pass you by, here is your chance to join the party with someone who isn’t going to give you the usual crap of if this or maybe that, that all other analysts spew. Let’s face it, they are only trying to protect themselves against a missed call. If they hedge both sides then they can always claim to have gotten the call correct.

I don’t play that game. When I make a call there is no misunderstanding it. It is a directional call and I make it in real time by recording it to the model portfolio. I don’t wait for confirmations and miss moves. I try to get in at bottoms.

No, of course, I won’t get every call right, but there is never going to be any question where I stand. If I miss a call then I’ll take my lumps and move on to the next trade. I won’t claim to have made the right call because I hedged in both directions.

So if you are tired of that crap, here is your chance one more time to purchase a yearly SMT subscription at 25% off. And let’s face it, at only $200 a year I’ve kept my rates at levels that everyone can afford and I think anyone who has followed the SMT knows the newsletter is worth 5 times that price. My goal was never to get rich off the newsletter. I started the SMT to help investors ride the gold bull to it’s completion, and besides biotech, I also think gold is at the very beginning of the third and final phase of it’s secular bull market. That phase will end in a bubble sometime in the years ahead.

I’ll reopen the 25% off offer one more time. It will expire at the market close Monday. New subscribers only.

Just buy a yearly subscription and I will refund $50 back to you.

Let’s get as many of us on the biotech and gold bull as possible. 4-5 years from now you will be thankful you did.