Gold is definitely in a new bull market.

Today I want to address the nonsense by Birdman that the technicals are indicating that gold is still in a bear market. Nothing could be further from the truth.

First let me dispel the idea that somehow the mining stocks haven’t broken out of their bear market down trend. Not only has the HUI broken the long term down trend… 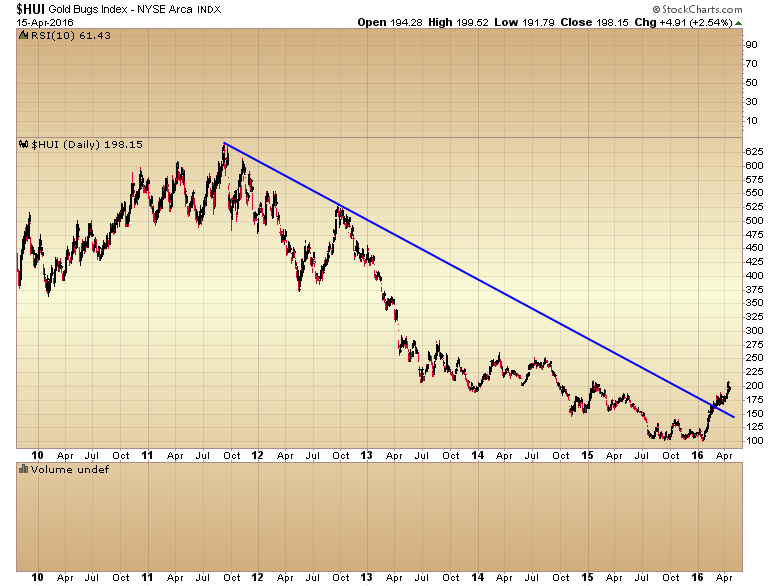 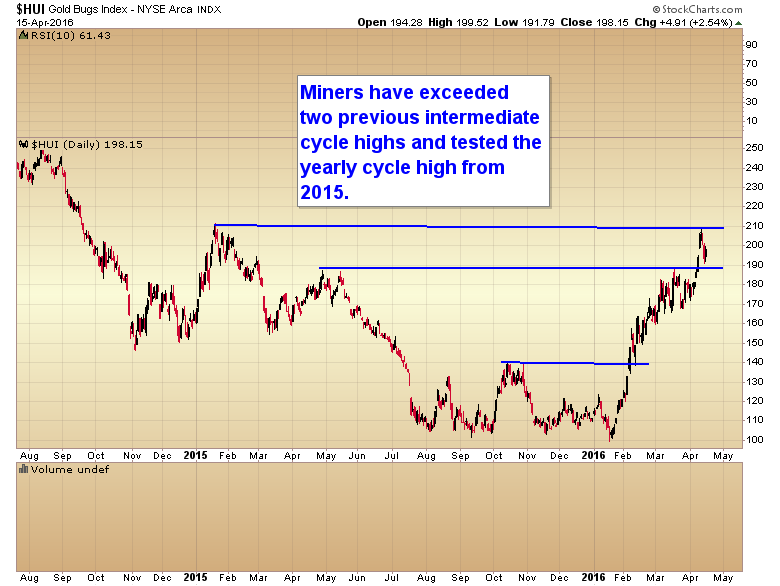 So for the first time in 4 years the miners are making higher highs. This is the very definition of a new bull market.

That’s the technical picture. Now let me go into the other signals confirming that the bear market is over.

7 weeks ago the COT for gold (and silver) reached levels that would be considered bearish, and during a bear market would have immediately turned price back down. Every analyst I know of started calling for an imminent collapse in the metals back below $1000 (Birdman included). At the time I pointed out that during bull markets the COT can reach bearish levels but price will remain elevated for many weeks and even continue higher. As we now know I was correct and gold just continued to rally and has held onto most of its gains for 7 weeks despite bearish COT levels, just like I suggested was going to happen.

During a bear market sentiment rarely goes much above 50% bulls before price rolls over and starts the next leg down. During the last 3 1/2 months sentiment in gold rallied above 65% and more importantly has held above 50% for a month and a half. That is bull market behavior.

This is the problem with being closed minded. You can’t recognize what is happening, you are driven by your bias. There is one reason and one reason only why gold generated a massive bear market. The Fed needed to do QE3 and keep the stock market inflated. They didn’t however want that liquidity to flow into the commodity markets, spike inflation, and destroy the global economy like it did in 2008. The easiest way to prevent that was to set aside the laws governing the futures market and attack gold with paper shorts creating a bear market. If gold was collapsing the rest of the commodity market would at least remain in check. It worked.

But by the fall of last year the energy industry was in trouble and on the verge of triggering another financial crisis as many overleveraged energy companies were on the verge of going under. The Fed desperately needed some commodity inflation. The simple solution was to stop the price suppression in the metals and allow the natural bull forces to regain control. That would tend to put a bid under the rest of the commodity markets.

Again it worked perfectly. Gold resumed its natural bull market trend, and oil bottomed not long after and has rallied 60%.

These people say that price manipulation is an excuse. Folks, once I recognized the manipulation and why it was happening my trading results improved dramatically. Recognizing that manipulation was occurring allowed me to alter my trading strategies and profit, not use it as an excuse to fail.

Now this same inability to recognize that the manipulation has ended is causing many of the bears to miss the new bull market.

Yes gold is due for a multi-week correction, but it is not going back below $1045, and I even have my doubts that gold will drop back below the 200 DMA. 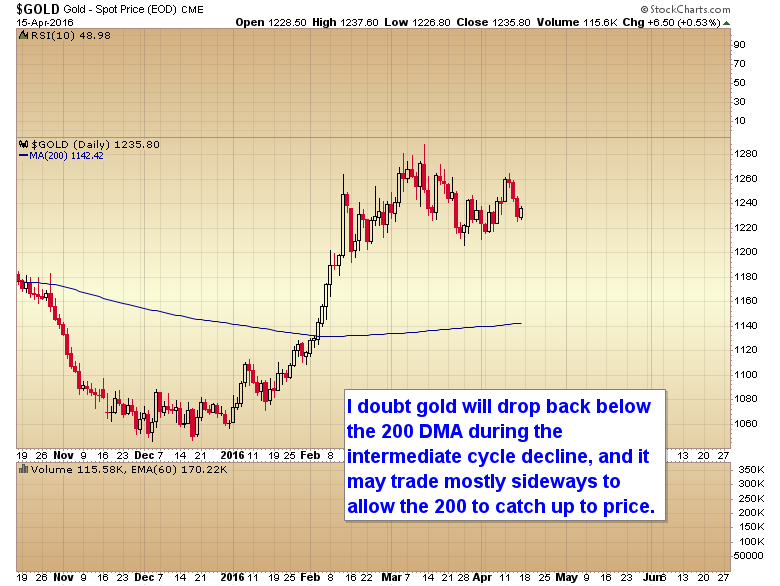 27 thoughts on “GOLD IS DEFINITELY IN A NEW BULL MARKET”