Since Al won’t allow me to comment on the Market Wrap of Kereport anymore, from time to time I’ll add my comments here. In regards to the market wrap today, Doc continues to try to pick a top. He did the same thing with gold’s baby bull. I think it’s a mistake to fight a trend as strong as the one that is in progress in the stock market. The Dow is only 3% from making new all -time highs and the advance decline line is on the verge of making new highs. 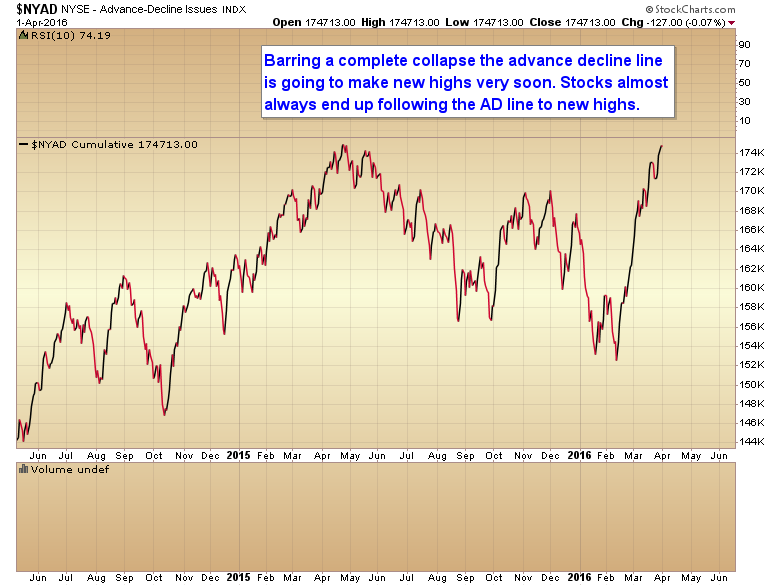 New highs in the Advance-Decline line will draw the market to new highs as well. The average retail investor is still buying puts like we are at the bottom of a 20% sell off. That is a lot of fuel as all those traders have to cover and switch directions 180 degrees. Folks, you’ve got to give up on the bear market theory. The 7 year cycle low has bottomed. It did what it needed to do. It got everyone bearish and on the wrong side of the market. We now have the fuel for the next phase of the bull market.

We are starting the bubble phase and a new 7 year cycle. Even if the 7 year cycle is destined to be left translated (which I think it probably is) there is no chance of a top for at least three years.

For heavens sake, quit fighting the trend. The trend is up and will be for at least another 2-3 years. Get on board, and especially get on board the biotech train. That’s where the bubble phase will focus most aggressively. It’s where the innovation is and it is the sector that got hit the hardest as stocks went into their 7 year cycle low. Remember, the market is like a pendulum. In order to drive a really big move higher it first has to drop very far to the downside and stretch the rubber band. That is exactly what has happened in the biotech sector. You have a very rare opportunity to get in at the very bottom and ride it all the way to the top.

And LPG (also on Al Korelin’s Market Wrap) is too early on gold stocks. We had a 90% rally out of the bear market bottom. It’s going to take at least another month or two of sideways consolidation, or a corrective move that retraces at least back to the 50% Fibonacci level before the next leg up can begin.

Just be patient in the metals sector. If you missed the initial thrust out of the bottom then you just missed it. It’s going to be awhile before the next leg up is ready to go. The earliest one needs to start looking for a bottom will be in May and we need to see sentiment sour and lots of calls for the return of the bear before gold will be ready for the next leg up. If you aren’t scared to death to pull the trigger then it’s still too early. And right now no one is scared of the metals.

Focus on the stock market and energy market for now.

32 thoughts on “Market Wrap – My Thoughts”