I listened to the debate between Rick Ackerman and Mike Shedlock on the Kereport today and I wanted to comment on the inflation side. We have a perfect example of two analysts locked into the deflationary crash scenario by what happened in 2009. Both are deflationists and both have been wrong all year long, and basically wrong since the bottom in 2009.

I’ll say it again: In a purely fiat system there is no level of debt that can’t be inflated away. We proved that in the 70’s when we inflated away the Vietnam war debt.

Let me paint a picture for you. Let’s say you have a printing press in your basement and have unlimited access to ink and paper. Explain to me how you can ever get so deeply in debt that you can’t fix the problem by simply walking downstairs and firing up the press.

Essentially that is what the government does, and they don’t even require any paper or ink. The money is created with a keystroke.

In this environment deflation is a myth and it’s why these guys have been wrong for years. They simply refuse to walk down the stairs and see the printing press for themselves.

In a purely fiat monetary system deflation is a choice not an inevitability. If a country is willing to sacrifice its currency then any amount of debt can be inflated away. It doesn’t matter how many trillions we are talking about. At any point in time the government can simply mail checks to its citizens. Never happen you say? For all practical purposes that’s exactly what we did in the spring and summer of 2008 with the rebate checks.

Mike says that stocks are in a bubble. I had to laugh when I heard that. A bubble is characterized by price stretching 50 -100% above the 200 day moving average and rising at least 100% in a year or less. It is also characterized by mass participation by the public.

Have any of those things happened in the stock market yet?

No, we aren’t even vaguely close to that yet. It will definitely happen sometime in the future, but not for several years yet.

For the last year I’ve been warning that the bubble phase was coming. It won’t happen overnight. Bubbles start slowly and build steam until the final year when things go parabolic. Just like I was the only one who spotted the baby bull in gold, I’m the only one who is warning that we are in the baby bull stage of the next bubble phase that is likely to last at least 3-5 years. in the stock markets.

I’ve watched as many analysts said I was crazy. Stocks were heading into a bear market they said. Well, here we are only 4 points from new all-time highs. Who’s crazy now. Me who predicted this a year ago, or the same analysts that continue to predict the next crash is just right around the corner?

Folks, it just doesn’t pay to bet on the end of the world. It can only happen once.

Meanwhile, the vast majority of analysts are just like Rick and Mike, trapped in the memory of 2009 and expecting deflation. Unfortunately they’ve been wrong all year and they will continue to be wrong. We aren’t going to get deflation anytime soon. The deflation will only come after the next series of bubbles pop. We are at the very beginning of a massive inflation and my subscribers have been making obscene profits this year because I correctly identified the inflationary trend developing instead of waiting for the sky to fall.

Folks, you have to quit listening to the deflationists, as they are going to cost you dearly in the years ahead. If you agree with what I said in the third paragraph about the power of the printing press, then you need to start buying stuff, almost any stuff, because everything is going up in the years ahead.

As I’ve been saying for over a year, EVERYTHING is going up together. All that printed money has to land on something, and the normal path is for it to land on everything.

I’ll finish by showing you one chart – the chart of the Nasdaq. The bigger the consolidation the bigger the rally once a breakout occurs. You are looking at a gigantic 15 year consolidation. When this breaks out there is simply no telling how far it will go. There are literally trillions and trillions of inflationary currency units available to drive this higher. I’m going to take a guess and say a bare minimum target over the next 4-5 years is 20,000 and I’m probably underestimating. 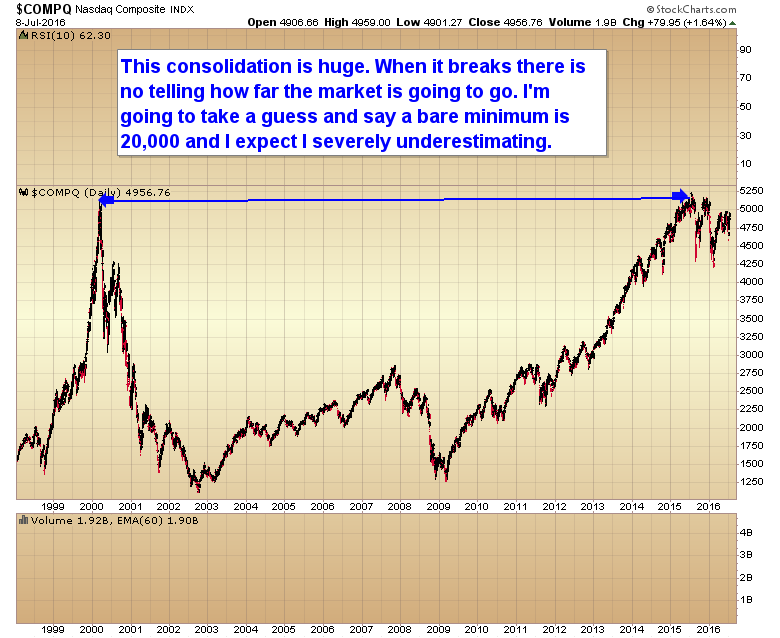