One characteristic of all major bull markets is that they rally much further than anyone originally expects. One of the characteristics to watch for is the size of the consolidation preceding a major breakout. Examples of this phenomenon are examined in various markets – gold, DJIA, Nasdaq and silver.

I think we need to focus on what is happening to the dollar. The intermediate cycle is now 63 weeks long. Clearly that isn’t normal. I’ve maintained for several years that the end game was going to play out in the currency markets. There has to be consequences to printing trillions and trillions of currency units , and leaving interest rates at 0 for 8 years. I don’t think the consequences are going to be deflation. I think the end game will be inflation, just like it was in the 70’s, and just like it was in 2007 and 2008.

It’s taken a while to manifest as other countries have jumped into the game and turned on their printing presses as well, so the collapse in the currency I’ve been looking for has taken quite a while to unfold. The first leg down ended in 2008.

In 2000 everyone thought tech stocks would continue to rise to the moon.

In 2006 everyone was convinced that we were running out of available land, and that real estate prices would continue to rise indefinitely.

Now in 2017 it’s the notion that the dollar is the prettiest pig in the pen. I’m going to go on record and say the dollar is not the prettiest pig. On the contrary I think the currency crisis I’ve been expecting is going to manifest first in the dollar. And as it does we are going to experience an inflationary shock. First in stocks, and maybe real estate, and later in the commodity markets.

When the dollar failed to rally and instead sliced right through the 38% Fib this week that was a warning bell that something is wrong. The theory now is that the 200 week moving average will turn price back up. But I’m starting to wonder if it will. During the last two bear markets the 200 offered no support at all, and price sliced through those levels like a hot knife through butter. 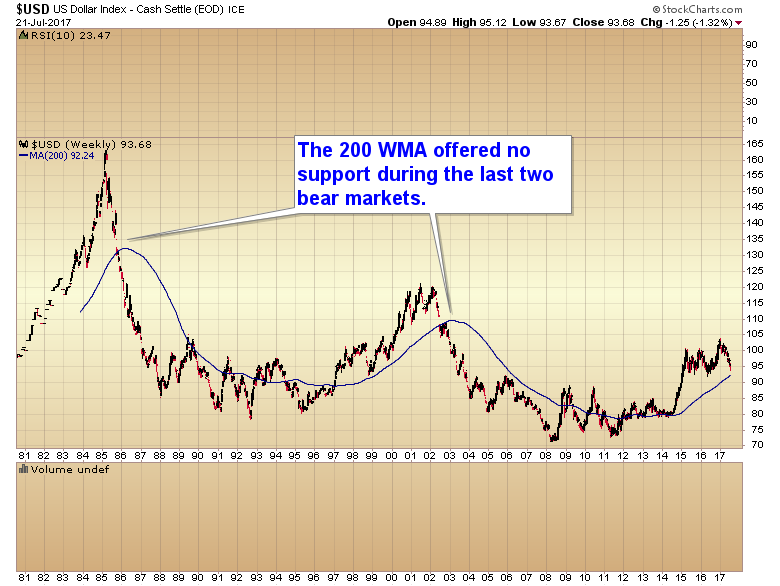 Ever since the world embarked on this crazy QE experiment we’ve seen markets do things they’ve never done before. Trends last much longer than normal. Cycle rhythms have evolved and stretched in many cases to two or three times normal, and sentiment has to reach much deeper or higher extremes before trends reverse.

Take a look at the bear moves in the yen and euro as a perfect example. The bear moves occurred as almost a straight line down. Virtually no bear market rallies. I wonder if the same thing is happening to the dollar. 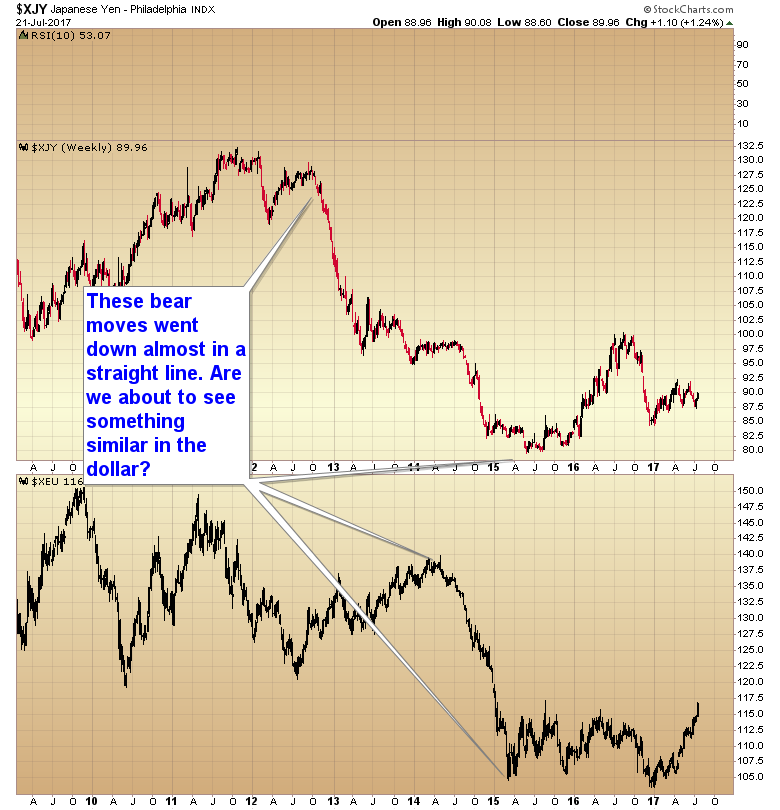 Next week is going to be important. The FOMC meeting, and the 200 WMA are the last support zone, and last potential event trigger to stop the collapse in the dollar. If these fail then I’d say it’s Katie bar the door time. The dollar is going into the abyss. 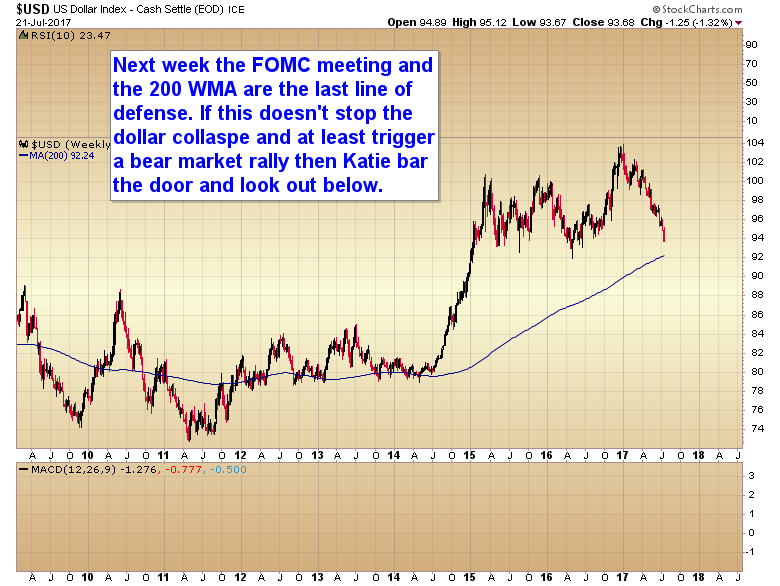 From the minute QE 1 began this was inevitable, but it has taken a long time to play out, with a very convincing bull market in the middle to get everyone on the wrong side of the fence and make traders believe that “this time is different”. It’s never different. It wasn’t different in the 70’s when we printed too much money to pay for the Vietnam war. It wasn’t different in 2007 & 2008 when the Fed kept interest rates too low, too long to pull us out of the tech bubble crash, and I maintain it’s not going to be different this time either. There is going to be a penalty for keeping rates at 0 for 8 years and printing trillions of dollars.

Folks there is no free lunch. We’ve had one heck of a party since 2009. If you think there isn’t going to be a hang over at some point, and a price to pay, I’d say you are going to be sadly mistaken.

I’m going to cover how I think this will affect the stock market, commodities, and gold going forward in the weekend report. 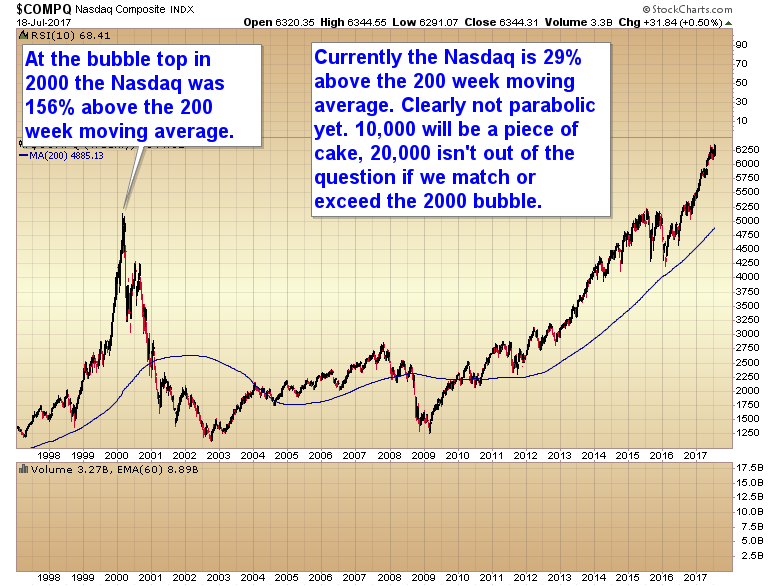 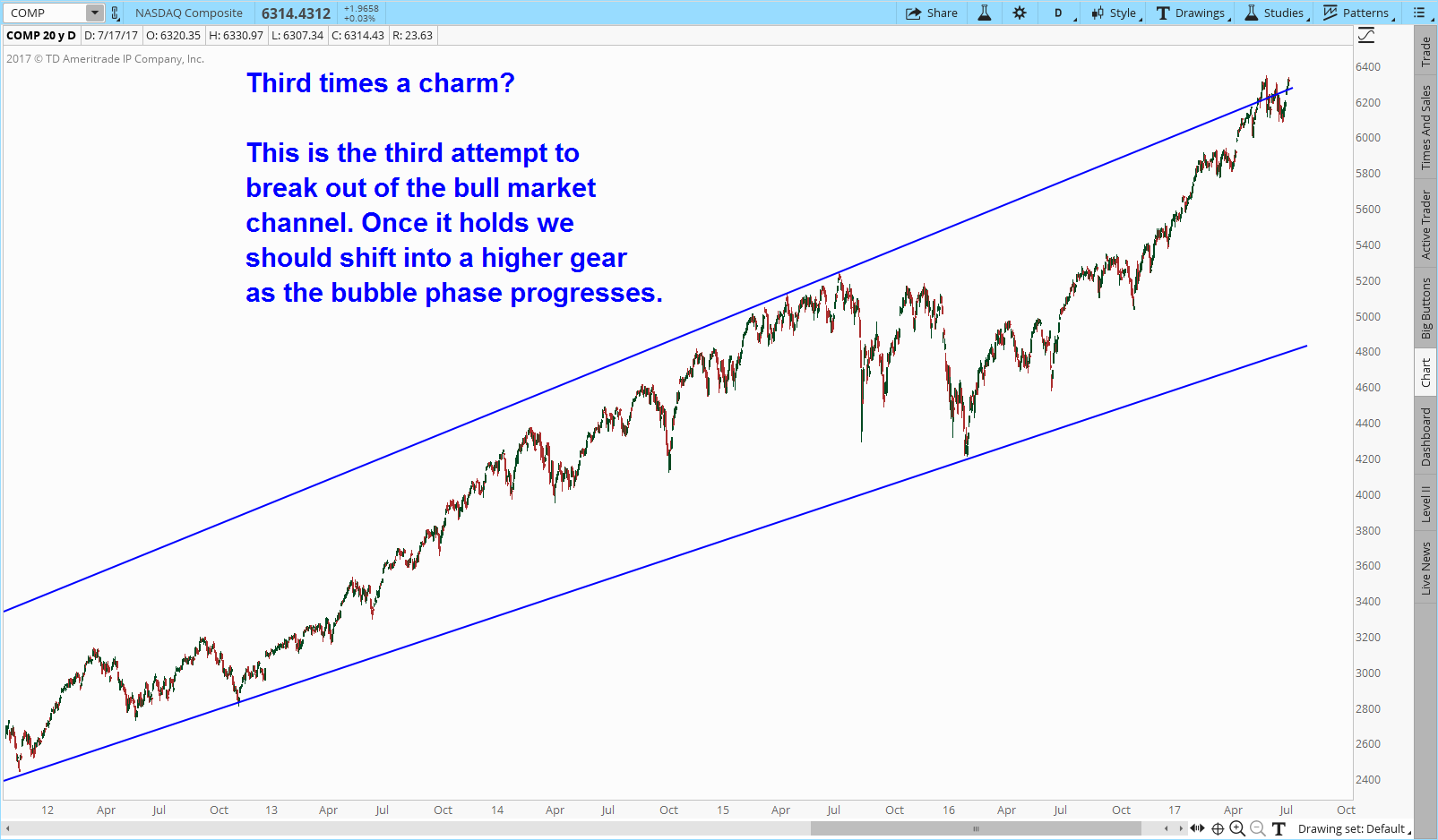 Folks this is the only format I’m going to accept.

I want the price you bought or sold at.

I want the percentage of the portfolio. (I will calculate the number of shares.)

I don’t want to see anymore stop loss levels. I don’t want number of shares (then I have to figure out what percentage of the portfolio that is).

Anything other than that and I’m just going to delete your email.

You also can’t use margin. If you exceed the value of the portfolio I will ignore any further trades.