Early in 2017 I made a prediction. I knew all year long that we would see one analyst after another try to call a top in this bull market. I also knew every one of them were going to be wrong. A perma bear bias is a great way to sell newsletter subscriptions, but it is completely worthless market analysis.

And just like I predicted, every other day we would see another analyst come out predicting a top. When we moved into the fall the predictions for a September or October crash became deafening. In reality what happened was 2017 produced one of the best years in a long time.

Folks I’m going to let you in on a secret. Bear markets don’t just appear out of nowhere. They require a catalyst. Since 2000 that catalyst has been the bursting of a bubble and a spike in inflation. Inflation is what crushes consumer spending causing the economy to stagnate and decline. Every recession since the 40’s has been preceded by a spike of 100% or more in the price of oil, in a year or less. In 2017 we had neither one of these requirements. Stocks were in a steady up trend but not even vaguely close to the kind of parabolic structure that would indicate a bubble forming, or more importantly a mature bubble ready to pop. 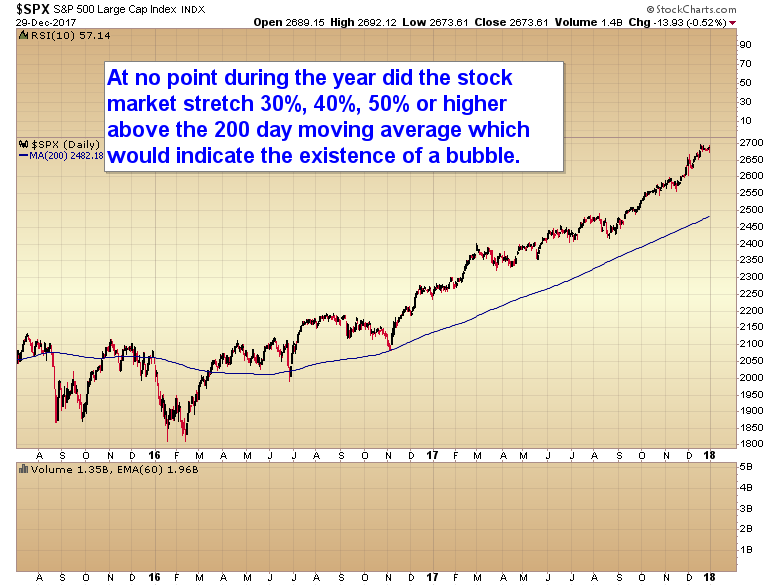 And commodity inflation was at one of the lowest levels in decades (although stock market inflation, inflation in education, and health care, home prices, etc. was running rampant. This kind of inflation however does not trigger a recession.) 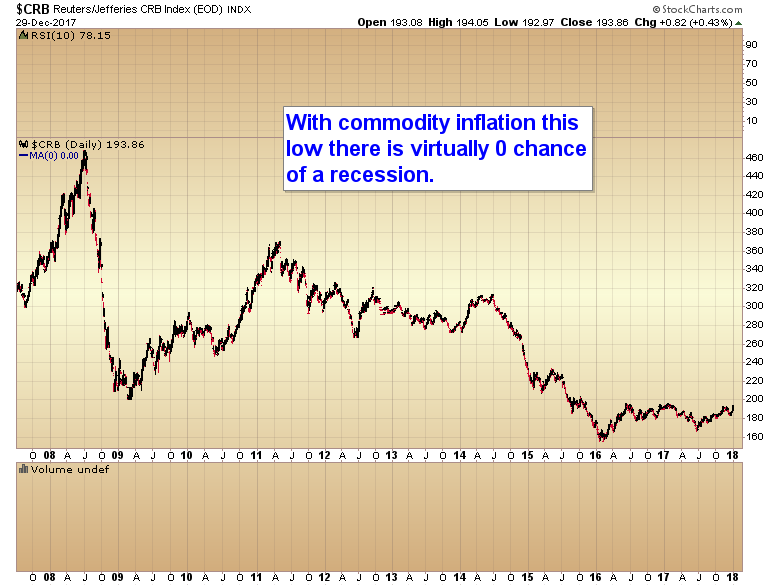 Now I’m seeing bearish analysts using sentiment as a valid reason the stock market is about to top. According to these people market sentiment has reached a stage of extreme complacency. Again this is complete nonsense. As I have shown before we aren’t even vaguely close to the kind of extreme market complacency that exists at bull market tops, much less a bubble top (and I think years of QE is going to ultimately produce a bubble before this bull market ends).

At bull market tops small retail traders become extremely complacent, and when they do they buy a lot of call options. They maintain this aggressive behavior for many months. Look at the chart below and decide whether the current market sentiment levels are even vaguely close to the last 2 bull market tops. Now keep in mind I think we have to produce a bubble before this bull market ends and look at where sentiment was during the last bubble in 2000. 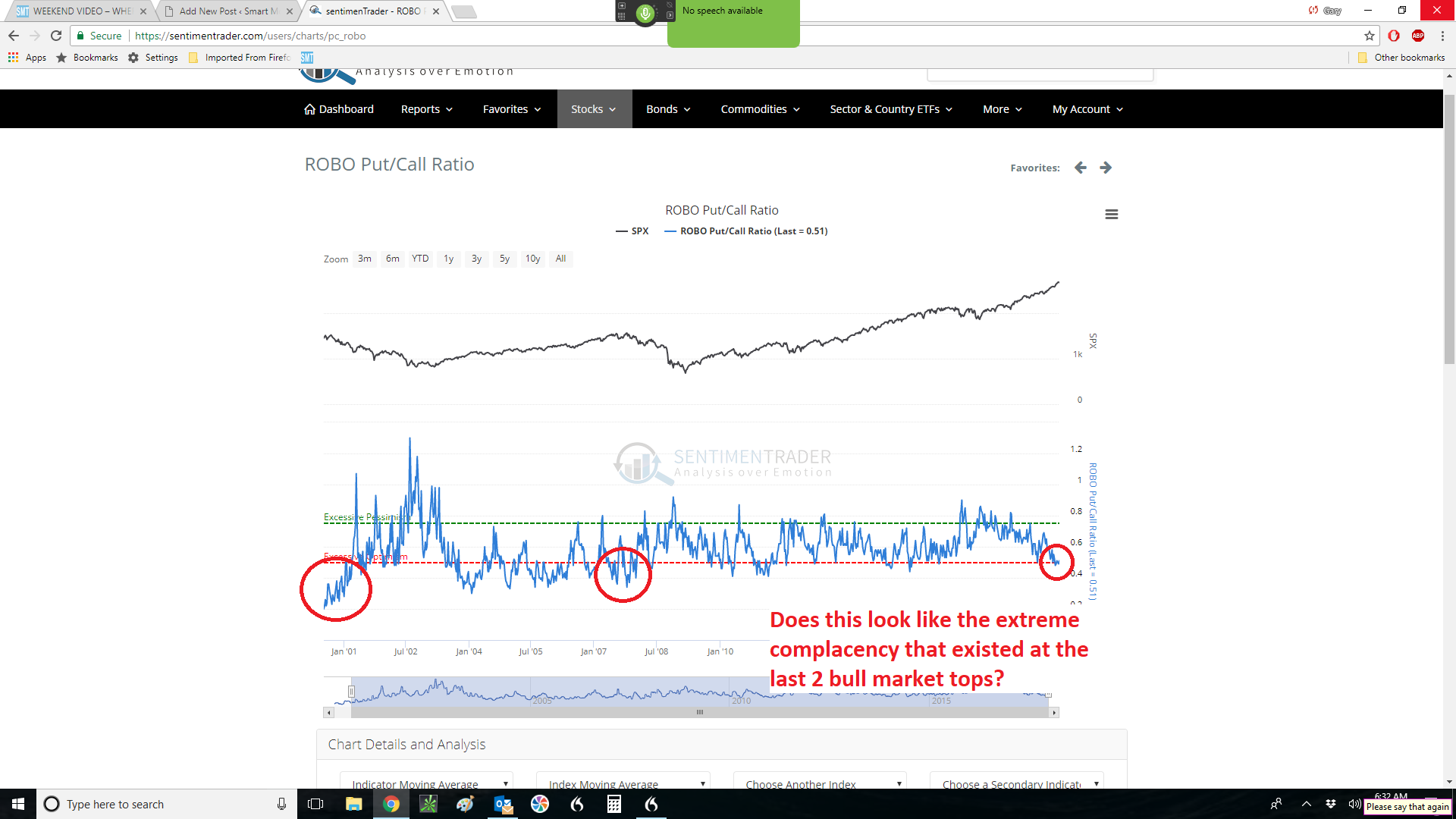 Here’s my next prediction. Over the next several weeks we should get a pullback in the stock market. The perma bears will get all lathered up calling for a new bear market, and they will again cause their followers to miss another buying opportunity. This opportunity may be the best in years as I think the early part of 2018 stock prices are going to transition into a more aggressive up trend as the bubble phase starts to accelerate and become parabolic.

Folks whenever you see an analyst trying to call a bull market top from a right translated intermediate cycle, run far and fast in the other direction. Your analyst doesn’t have the slightest clue how markets behave. 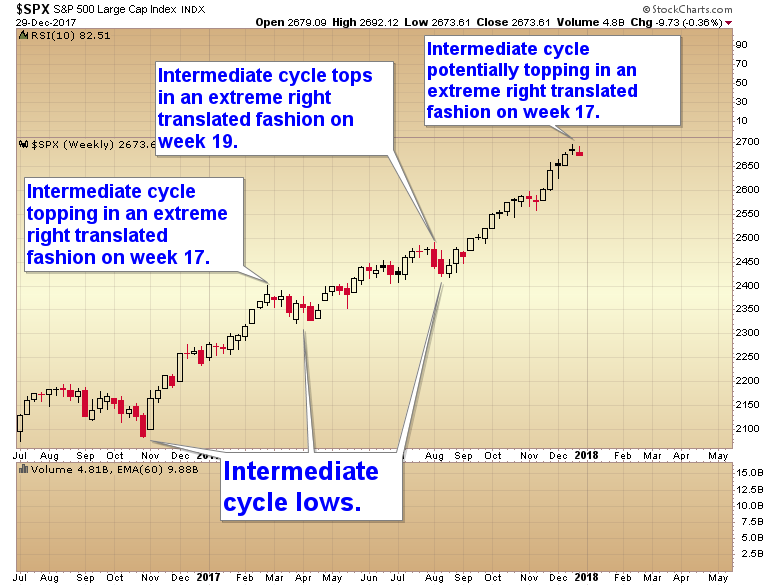 I’m going to make the same prediction for 2018 that I did in 2017. We are going to see one analyst after another try to call a final top. This will continue until the parabolic structure becomes very mature, at which point all of these perma bear analysts will capitulate and become bullish. They will have kept their followers on the sidelines almost the entire way up, and they will continue to keep them out of this bull market until we get close to the very top, at which point they will switch sides and become bullish right before the market crashes.

This is exactly the same behavior we have seen in bitcoin recently. It was hilarious how many analysts I saw jumping on the bitcoin train over the last couple of months. Again this is a great way to sell newsletters, but absolutely terrible market analysis. With bitcoin stretched 240% above its 200 day moving average and clearly in one of the largest, if not the largest bubble in the history of the world, this was not the time to start telling your followers to buy bitcoin. The time to do that was 3 years ago.

Folks we’re going to get another buying opportunity in the weeks ahead. Don’t miss it because you are listening to a bearish analyst that is trying to sell you a subscription rather than actually analyzing the market.

We are starting a major bear market in the dollar, and it is going to drive prices of almost everything higher in 2018.