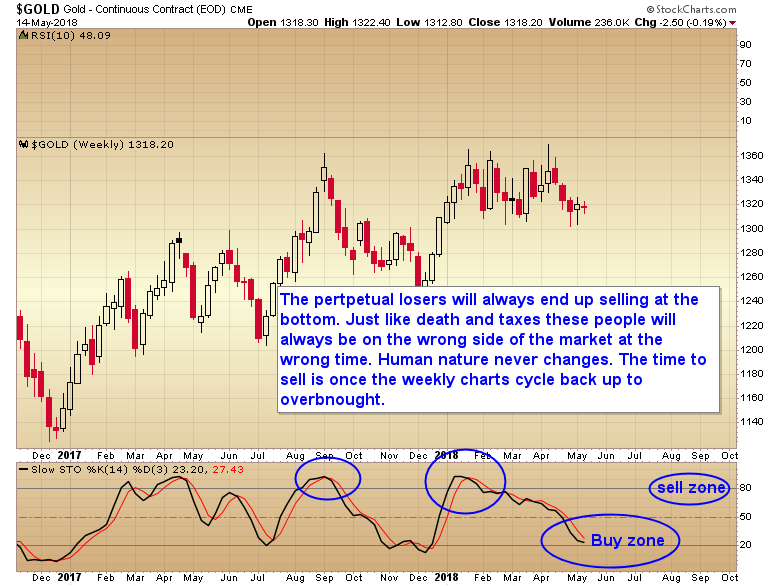 This is how so many people managed to miss out on tremendous gains. The SMT metal portfolio has gone from +50% in December of 2016 to +371%. We didn’t time perfect entries on any of those trades but we got “close enough” to make a lot of money. Almost without fail we had to hold through a temporary drawdown during the bottoming process. Many many traders sold or cancelled right at the bottom because they lost sight of the big picture and panicked during the bottoming process. Look at the unbelievable opportunity they missed. All because they couldn’t control their emotions and think logically.

They are doing it again. Human nature never changes. Just like death and taxes, some things are inevitable. Many (if not most) traders will always sell when they should be buying, and buying when they should be selling. In 6 months the metal portfolio will be up another 25-50 or 100% and most will have missed it again. If people could think logically I would see a huge influx of new subscribers every time the weekly stochastics became oversold. They would learn how cycles work and take advantage of them at the bottom. But that’s never how it plays out. Instead I get traders cancelling at bottoms and the big influx of new subscribers occurs only after the weekly stochastics cycle back up to overbought. Let’s face it most people are, to put it bluntly, stupid. Logically they can see what they should do, but emotionally they just can’t do it.

This will play out all over again during the next intermediate cycle low and those very few that have learned to control their emotions will just keep racking up more and more profits while most just keep missing one opportunity after another.