How many times have you heard this? We caught the exact bottom (or exact top). We traded the move perfectly. My system produces 90% (or better) winning trades. We’ve been up 100% or better every year. How would you like to turn $1000 into $50,000 in three weeks?

Let’s face it, almost every newsletter writer in the world uses this kind of marketing tactic. But do all of them actually catch the exact bottom and exact top? Of course not. If something sounds too good to be true, then it is. The best traders in the world rarely win more than 65 to 70% of the time. The three best traders (actual traders making multiple trades, not the one or two that scored huge on a single trade) in the challenge all have a winning percentage between 65 and 73%. (My win percentage for the SMT metal portfolio is only 66% yet we’ve still managed to gain 100% in less than a year. )

So if you see outlandish claims of incredible performance, or sky high winning percentages you can pretty much bet the farm this is complete BS and nothing more than a marketing scheme to entice gullible retail traders into purchasing a newsletter subscription.

Here’s another dead giveaway. If an analyst claims to have an amazing trading record but won’t run a real time model portfolio, you can again bet the farm the reality is a far cry from the hype. If a newsletter is going to make far-fetched claims of incredible accuracy then they should be able to back it up with real time trades. Off the top of my head I only know of one other newsletter besides myself that will actually put his ass on the line and make real-time calls.

Here’s what you get with most newsletters:

Lots of alternate wave counts or scenarios. No matter which way the market moves the analyst will have covered all the bases and then several weeks later will claim to have caught the turn perfectly.

The system is so complex, full of contradictory rules and exceptions that it’s virtually impossible to determine what call the analyst is making. This is the baffle them with bull shit strategy, and many analysts use this to keep subscribers entangled in a never ending quest to unravel what the hell they’re saying. Most retail traders automatically assume the more complex a system is the better it’s likely to perform. When actually the truth is the more complex the system, the more likely subscribers are to keep shelling out money.

This particular strategy claims to have a computer program that can predict the market. The particular black box that is in vogue today is the so-called artificial intelligence. But like most of these systems that have come and gone over the years, usually what the computer spits out is a hodgepodge of contradictory signals that can be interpreted to mean almost anything. One week will be a directional change. The next week will be high volatility. The week after that a panic. So when you put it all together the computer conveniently covers all the bases and traders are left scratching their head wondering how one could use the system to actually make money. Again I don’t think I’ve ever seen a black box system that actually makes real-time trades. Any institution that actually does have a profitable blackbox certainly wouldn’t sell you access to it. They would guard it carefully for as long as possible so they could keep the profits for themselves. The secret to most black boxes is that they are very good at generating subscriptions as people like to believe that machines can be programmed to beat the market. I can assure you machines are no better at seeing the future than the rest of us. What machines are very good at doing is trading at incredibly high speeds and shaving off fractions of a penny millions of times a day.

Here’s another tactic many newsletter writers use. They will outline a potential path going forward, and then immediately cover their ass by saying of course the opposite could play out. Again I’ve seen this kind of nonsense many times, and then two or three months later the analyst will claim to have caught the exact bottom or top. I’m of course scratching my head wondering when this guy actually made a directional call because all I ever heard in real time was “maybe this” or “maybe that”. I used to have a subscription to a newsletter writer who did this constantly. Everything was maybe this or maybe that. He would never put his ass on the line with a real-time directional call. Or he would out of the blue announce that he had taken a position in some stock that had been rallying for the last four weeks. I’m of course thinking why the hell didn’t you tell us that four weeks ago? Or after the stock had topped and crashed he informs us he took profits right before the crash. Again why the hell didn’t we get that memo before the crash?

And let’s face it a high winning percentage doesn’t mean an analyst is actually making money. I’ll give you a strategy right now that wins between 85-92% of the time. It’s called a Bollinger band crash trade. The rules are simple. When price closes below the lower Bollinger band (parameters 10:1.9) buy at the open the next day, and sell on the first profitable close, or after 15 days whichever comes first. 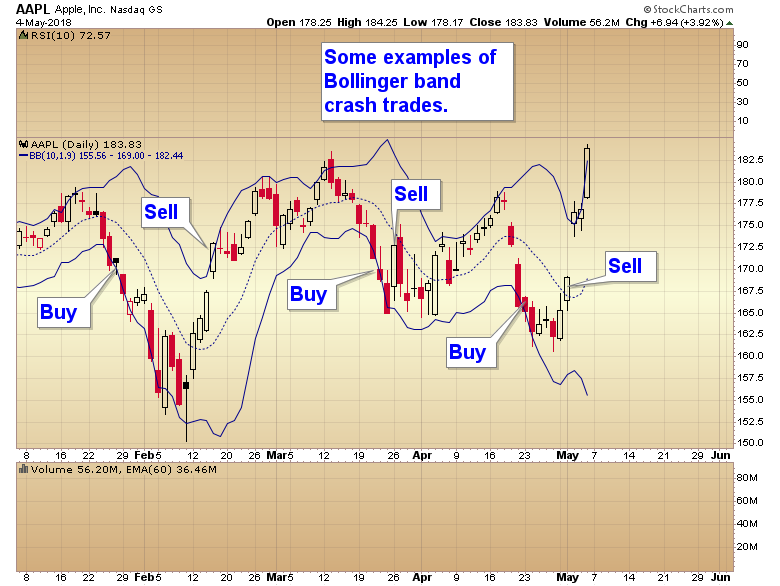 But here’s the problem. Despite having a very high winning percentage, most of the winning trades only produce a very small profit. And when the system produces a losing trade, even though it happens only rarely, the losing trades can be huge and ultimately even though they only occur 8-15% of the time, the few big losses ultimately overwhelm the many small winning trades. So don’t try this system at home boys and girls. By the end of the year you will find you have less money in your account than when you started even though you will have a ton of winning trades.

You can see how a gullible novice or even intermediate traders could be suckered in to paying for access to a system like this. One that produces a lot of winning trades but ultimately no sustainable gains. This is a great marketing tactic to generate subscription revenue, but it rarely generates any long-term profits.

Here’s another marketing tactic used by many if not most newsletters. They trade mainly individual stocks. Let’s face it, most retail traders are gamblers, not serious investors. They are looking for someone to give them trade ideas every day. The only way to generate that many trades is by picking individual stocks. But let’s face it there’s no way any of us are going to beat Wall Street at their game by trying to trade a bunch of individual stocks based on nothing more than chart patterns. These institutions have armies of analysts that know these companies inside and out and there’s just no way any of us are going to be able to compete against that kind of firepower. In reality one can make plenty of money simply trading ETF’s where you don’t have to compete against Wall Street’s analysts, or have company specific risk, plus you’re going to save a small fortune on commissions and fees.

When I started the challenge last summer many newsletter writers and analysts were invited to join. To my knowledge not one single analyst was willing to put their ass on the line in the challenge. I guess they were worried about damaging their pristine record if they actually had to play by the same rules as the rest of us and make real time trades.

The moral of the story is that if you are going to pay for a mentor, or access to a trading system you might want to demand the newsletter produce real-time trades to back up their spectacular claims. If they won’t make real-time trades you probably want to slide them over into the “to good to be true” column.