In a recent article gold analyst “Plunger” made the case that gold is in a cyclical bear market. In cycle terms he’s saying the 8 year cycle has topped. I’m going to agree with him that gold is stuck in a pattern of lower lows and lower highs. Technically that does imply it is in at least a temporary cyclical bear market. However there are a few inconsistencies that make me hesitant to jump on the bear band wagon right now.

The first inconsistency is that I’m pretty confident the CRB has started a new secular bull market. You can see in the next chart that after 13 years of lower highs and lower lows, we now have a new pattern forming with a new 3 year cycle that has just surpassed the previous 3 year cycle high. 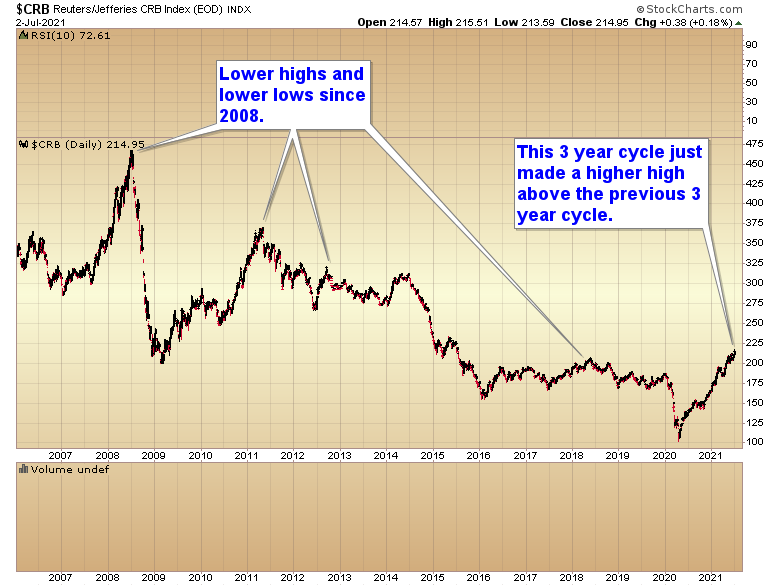 At the low last year oil was trading at -$50. If that isn’t a secular bear market bottom I don’t know what is.

If commodities are in a secular bull market then not only will this 3 year cycle make a higher high (which it has already done) but it should also right translate. By that I mean it should rally for more than half the cycle. In this instance we are talking about the larger multi year cycle which runs on average roughly 3 years and 3 months. We’re only a little over a year into this cycle. In a secular bull we would expect this rally to persist for at least 2 years and probably for 2 ½ or even 3 years. It seems unlikely to me that gold would be left behind if the rest of the commodity markets still have a year or more to rally before starting down into their next 3 year cycle low. Keep in mind that the 8 year cycle low in gold should correspond pretty closely with the next 3 year cycle low in commodities which will be due in mid to late 2023 or early 24. It seems like a stretch to think the CRB will continue higher into 22, or even early 23, and gold will just keep dropping down to its 8 year cycle low.

I’m going to agree on the manipulation. Heck, at this point it’s pretty much common knowledge. What I’m going to disagree on is whether the bullion banks can temporarily change the dominant trend. I think they can and do. These attacks often come in the overnight trading or the premarket where there is little volume. They often result in technical damage that prevent technical buyers from stepping back into the market. The most recent attack is a perfect example. The attack on the FOMC statement set the stage for a follow up attack in the premarket the next day to drive gold back below that critical 1800 support zone. This support zone was never going to break naturally on a first attempt. It might have broken on a second or third attempt, but it was far too large of a support zone to just give way on the first try… unless the attack came in the premarket before any defense could be mounted. The cartel had already taken out that support before the days trading even opened. By the open no one was going to chance jumping back in now that gold was already below 1800.

So I’m going to argue that to some extent, maybe a big extent, 100 points from 1850 to 1750 is completely artificial and due to two well timed attacks, the most damaging occurring in the premarket that took buyers out of the market before it even opened and left gold below a major support zone. 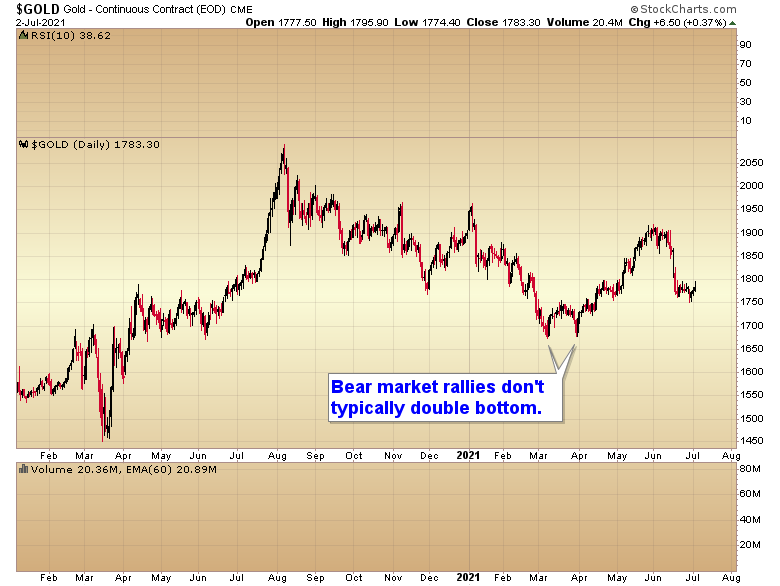 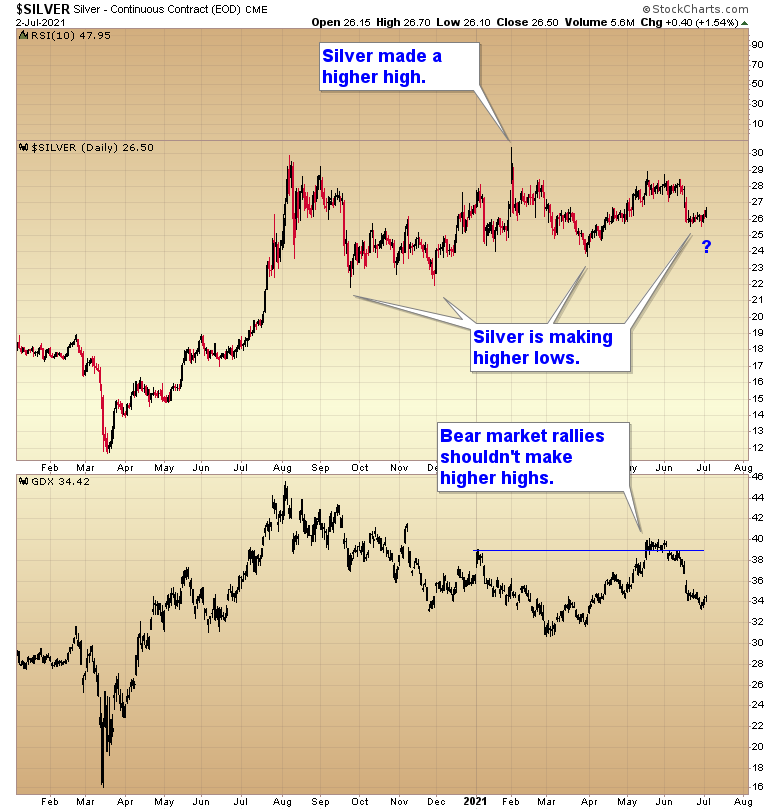 Now if gold rallies and then rolls over to make a lower low below the March low, and silver and miners follow, then yes the 8 year cycle has topped. But until that happens I’m a bit skeptical that gold has fallen into a cyclical bear market while every other commodity is starting a secular bull market. I think it’s more likely that gold is just the victim of a very well designed manipulation to keep price suppressed in the attempt to slow down or stop the rampant inflation developing as central banks print insane amounts of QE in the desperate attempt to keep the Keynesian Ponzi scheme from imploding.