Last week I wrote an article on why I think the bull market in stocks is coming to an end. As usual the retail public is chasing a move that is extremely mature and ripe to reverse assuming that the trend will continue. Amateurs always make this mistake at tops …and bottoms. Their emotions tell them the move will continue indefinitely. It never does.

As you can see in this next chart, dumb money traders are becoming more and more confident the further this parabolic move progresses. Professional traders, on the other hand, get more and more nervous as the market stretches further and further above the mean.

I can assure you we are not done with the secular bear market in stocks that began in 2000. All the Fed has managed to do is blow another bubble in the stock market. And a bubble that has again reached levels of overvaluation that will eventually collapse the market just like they did in 2007.

P/E ratios are again at historically extended levels where most bull markets in history have topped. Notice the extreme overvaluation in 2000 (P/E ratio of 45). That kind of overvaluation isn’t going to be corrected by one brief move back to 15 (the historical mean). An overvaluation as extreme as what occurred in 2000 is going to require a move just as extreme in the opposite direction before we finally clear this market of the excesses that were created during the tech bubble, and exacerbated by the real estate bubble.

I don’t expect this secular bear market will be finished until we reach P/E ratios similar to 1932.

On the other hand, while retail traders are chasing the bubble, professional traders are looking for real opportunities. I think I can say without any hesitation, real opportunity is not going to be found in the stock market after a five year bull run.

As a matter of fact if one can pick a bear market bottom the initial surge will often gain 40%-100% in the first few months. These kind of gains certainly make it worth the frustration and whipsaw’s that are almost always incurred trying to pick a final bottom. 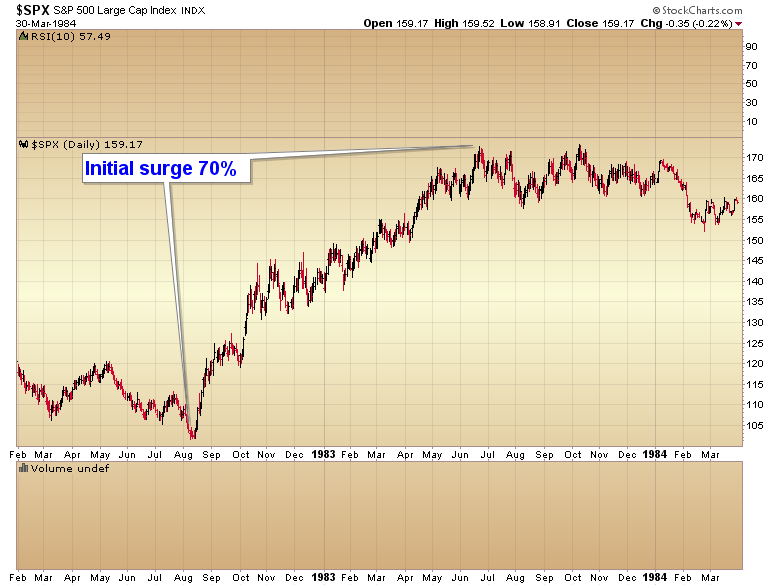 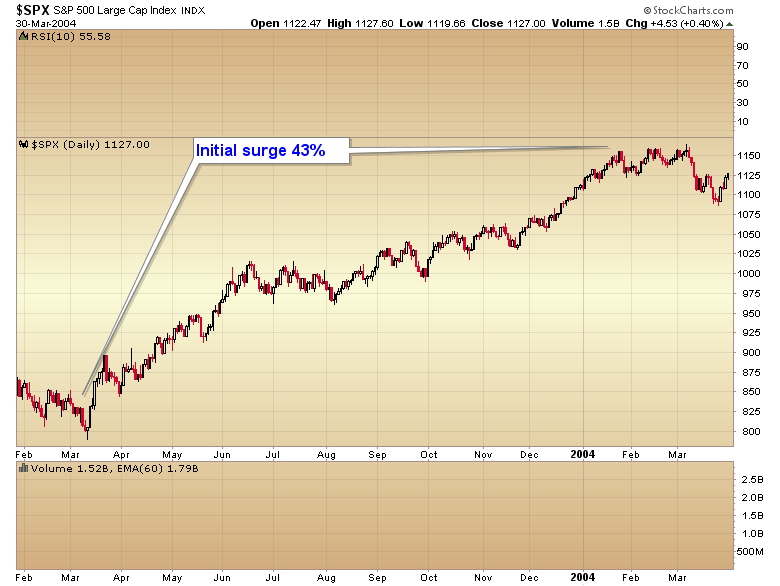 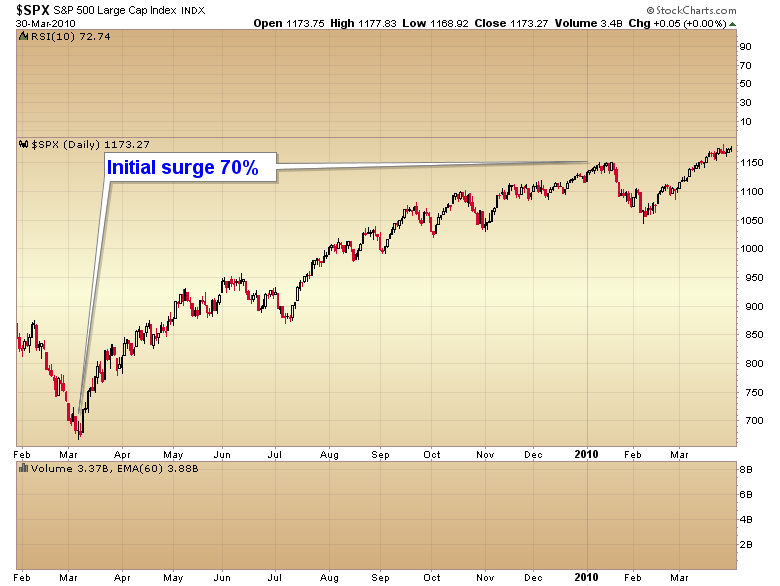 Not surprisingly the more severe the bear, the more violent the rally is once the final bottom has formed, and the bigger the bull market that follows.

Here are two examples of extreme bear markets, and the initial rallies off of those final bottoms. 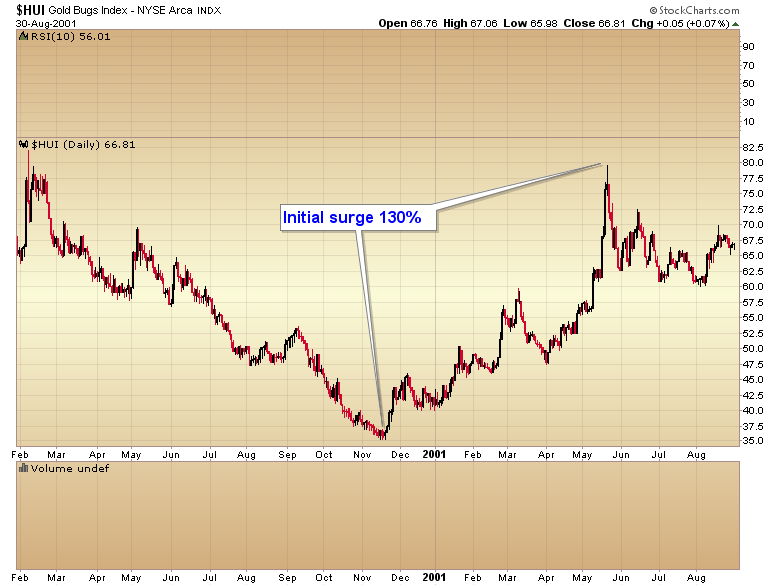 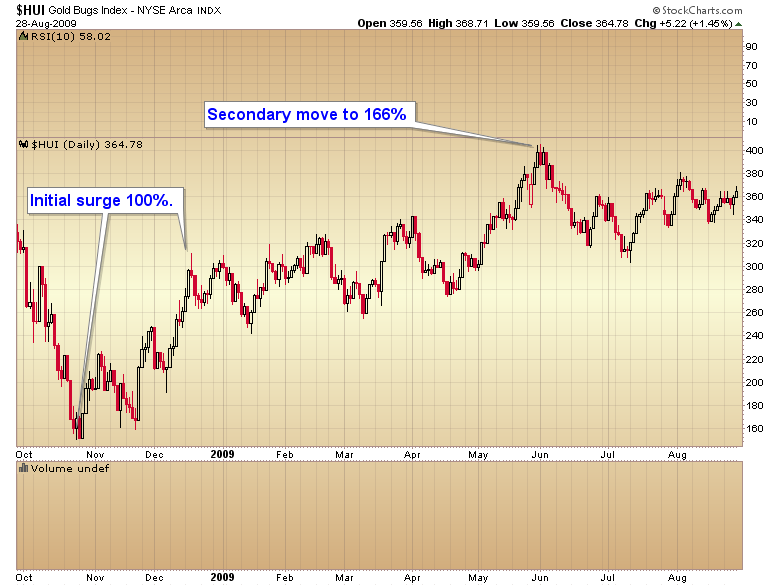 Now let me show you one of the most extreme bear markets of the last 30 years. 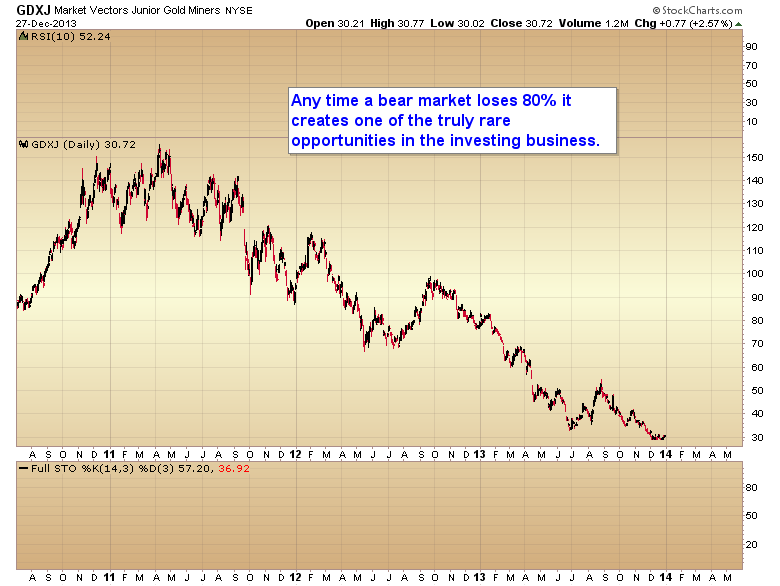 While retail investors are blindly plowing money into an overvalued, overextended, overbought, and parabolic stock market, professional traders are quietly accumulating massive positions in preparation for the end of one of the most severe bear markets in decades. 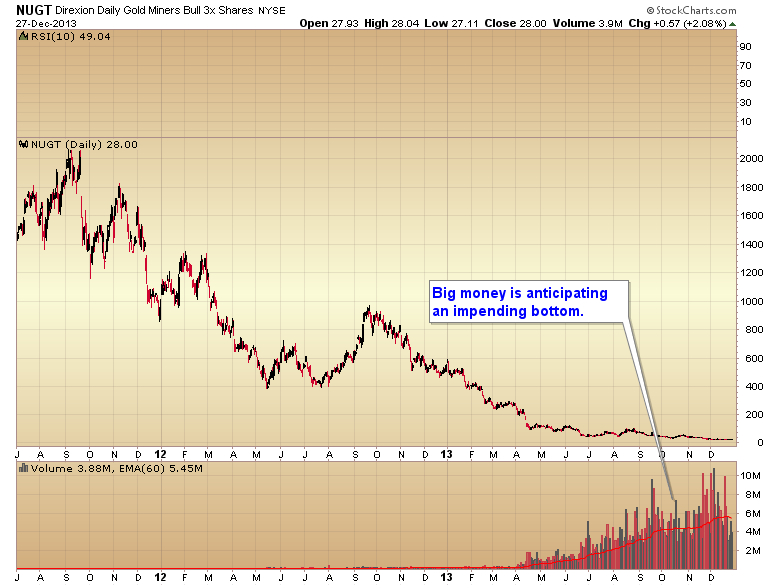 Once we have confirmation that the final bottom has been printed, I’m expecting at the very least an initial surge over the first 3-4 months to test the 2012 resistance zone. That would be a move of almost 100%. 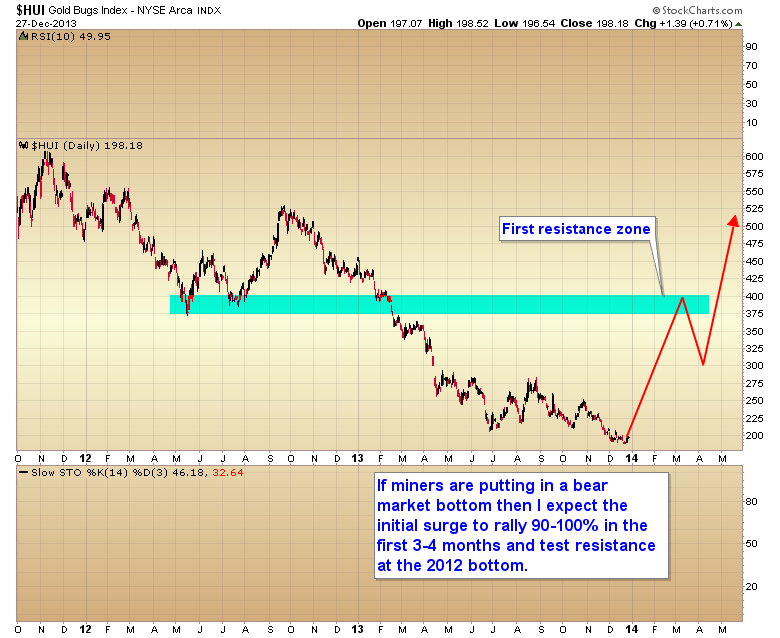 I’ll say it again, picking bear market bottoms isn’t easy. Very few people have the patience, conviction, and endurance that it takes to survive the volatility of a bear market bottom. Especially when everyone else they know is making money buying into the latest bubble. But human nature never changes, and those people always get caught when the bubble pops. Tech investors, real estate investors, and possibly BitCoin investors come to mind.

Whereas the few traders that can hold on and survive a bear market bottom are the millionaires and billionaires of tomorrow.

Well the Fed in it’s infinite wisdom has gone and done it again. They’ve created another bubble. Arguably the 6th in the last 13 years (tech, real estate, credit, bond, oil, and now stocks again, and an echo bubble in housing). If one steps back far enough they can see what’s really happening. The Fed has now manufactured a parabolic move in the stock market. Much more aggressive (and thus even more unsustainable) than either the 2000 or 2007 tops. 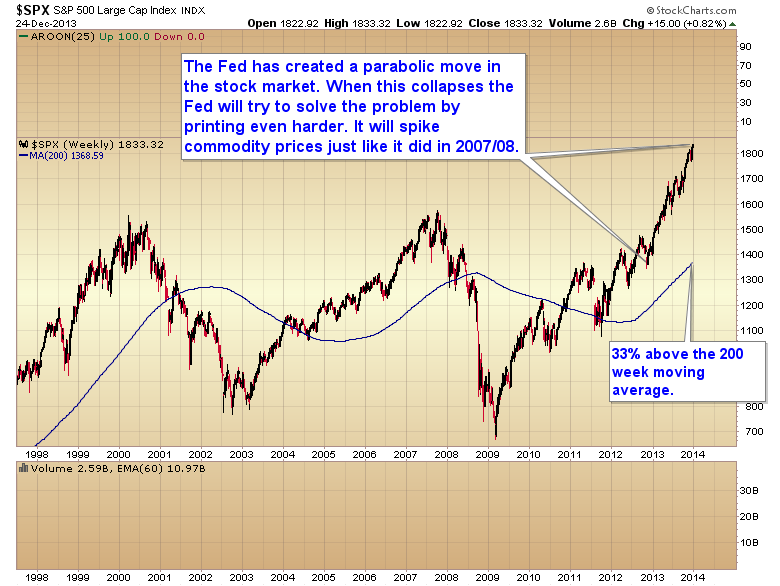 Here’s the problem; Parabola’s always collapse. There are never any exceptions. And when this one goes it’s going to take the global economy with it. 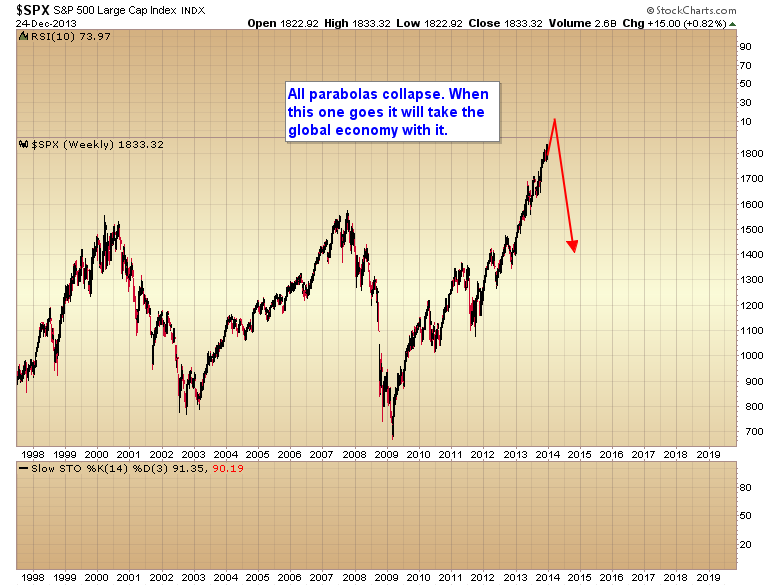 At some point profit taking starts as nervous professionals fearing a regression to the mean event start to lock in profits. As the big institutional money starts to come out of the market the selling begins to accelerate and the losses quickly mount. The steeper the parabola the quicker the losses once the parabola breaks. It’s not unusual to see 3-6 months of gains evaporate in the space of days when one of these collapses. I have a pretty good idea where this one is going to initially once the break begins (more on that in a minute).

This all started in 2011. If the Fed had just allowed the market to correct naturally and drop down into it’s 4 year cycle low in 2012 we would probably now be on a sustainable path into another secular bull market. 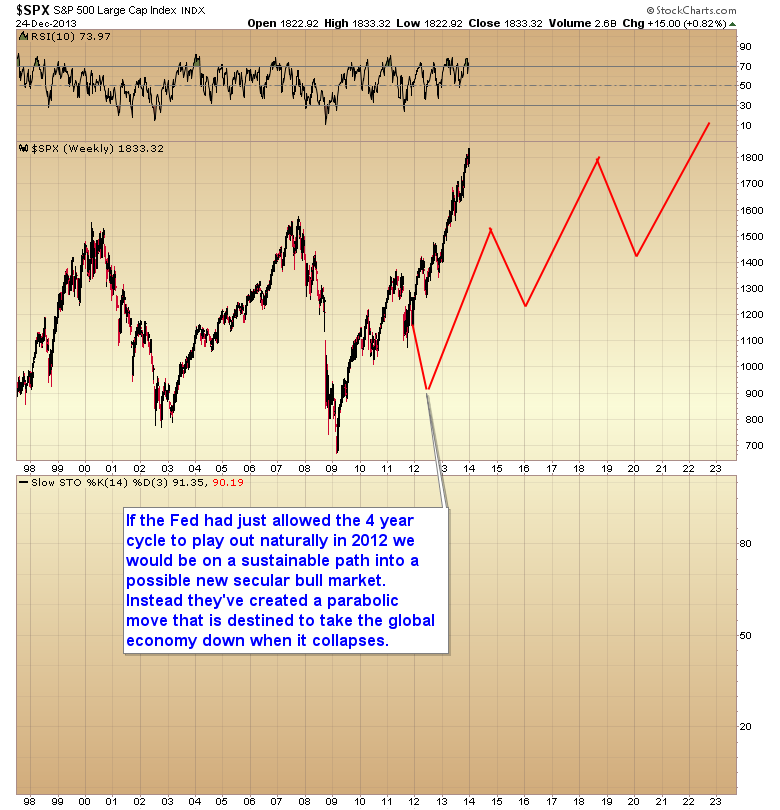 Unfortunately the Fed made a catastrophic mistake. Instead of allowing the market to function naturally they began operation Twist, then LTRO, then QE3 and QE4. The result as you can see in the first chart is they’ve created a huge unsustainable parabolic move in the stock market. Try as they might to prevent corrections the longer they allow this to continue the more devastating the crash is going to be when the market breaks.

Based on the extremely stretched nature of the current intermediate cycle (week 27) I’m looking for a top and the start of the collapse early next year. Possibly as we begin earnings season. If one is in the market trying to catch the last few percent understand we aren’t in an investor environment this late in the bull market. This is short term trading only, and at the first sign the crash has begun get out and stay out.

Margin debt and money market funds are at levels indicating retail investors are now all in like they always are at market tops.

I expect we are going to see the market fall precipitously to test the previous bull market tops and erase most of last years gains in a matter of days or weeks. At that point Yellen will panic and all thoughts of tapering will vanish. As a matter of fact I expect the Fed will increase QE, maybe drastically, to try and reflate the parabola. 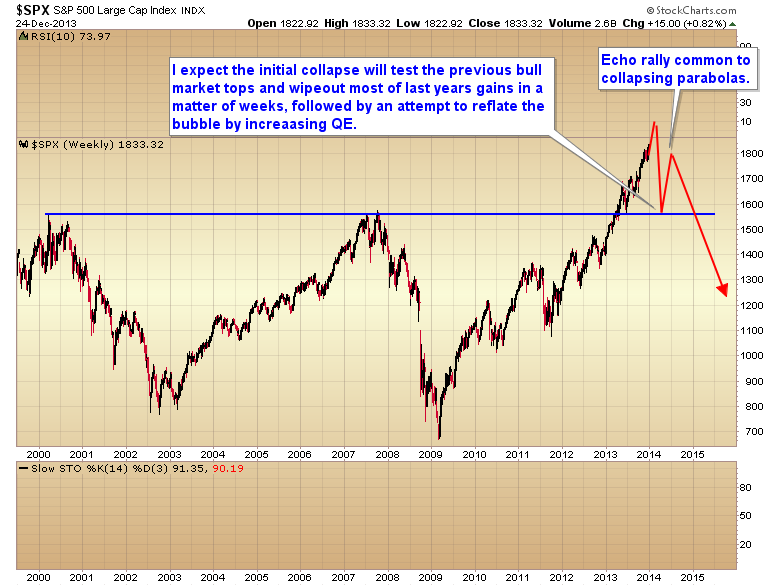 At that point though the damage will already be done. All they will accomplish is a violent echo rally common to all collapsing parabolas. From there the bear market will have begun and the more QE they throw at the market, the more and faster the liquidity will leak into the commodity markets until inflation completely destroys the economy and the next recession gets underway.

The Fed thinks they are creating a “wealth effect”. All they’ve really done is sow the seeds of the next crash.

It’s been my theory for some time now that this QE driven bull market would top either in late 2013 or early 2014, followed by a multi-month stagnation process as liquidity leaked into the commodity markets. 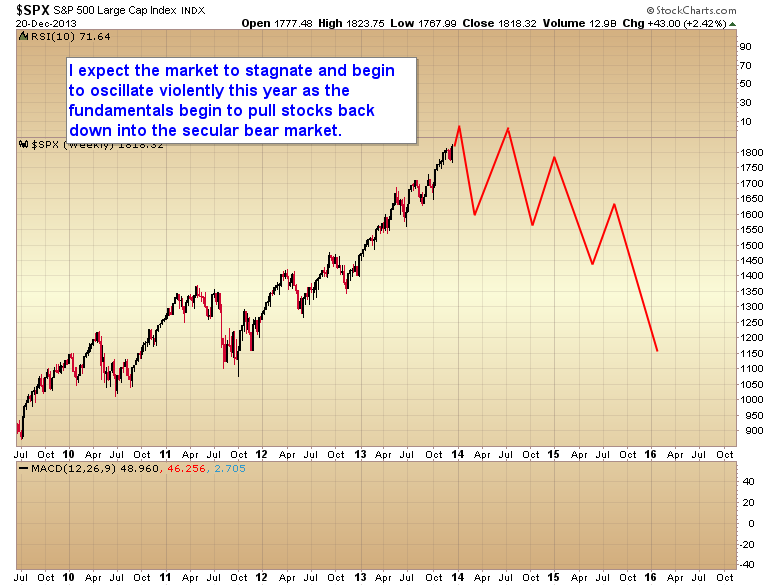 At almost 5 years this bull market is right up there with the three longest bull markets in history. Sentiment, and complacency have reached levels typical of a bull market top. We are clearly in the final parabolic euphoria phase of the bull. 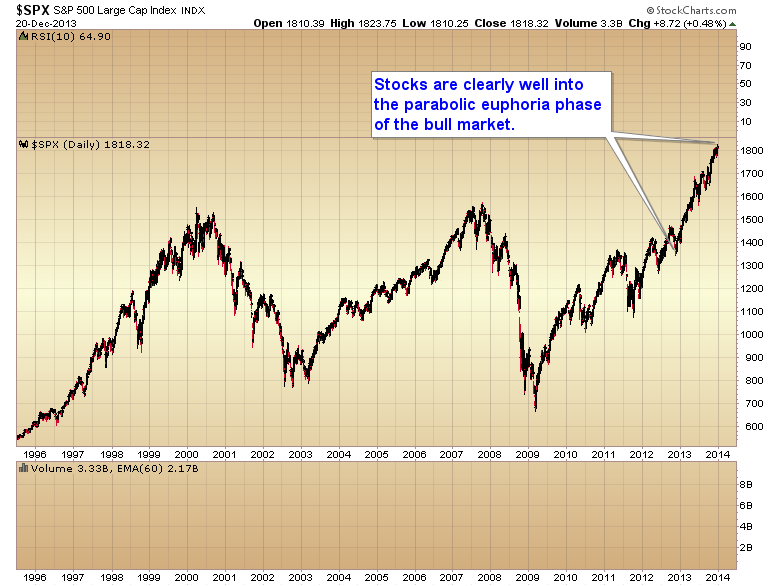 The advance decline line has started to diverge. 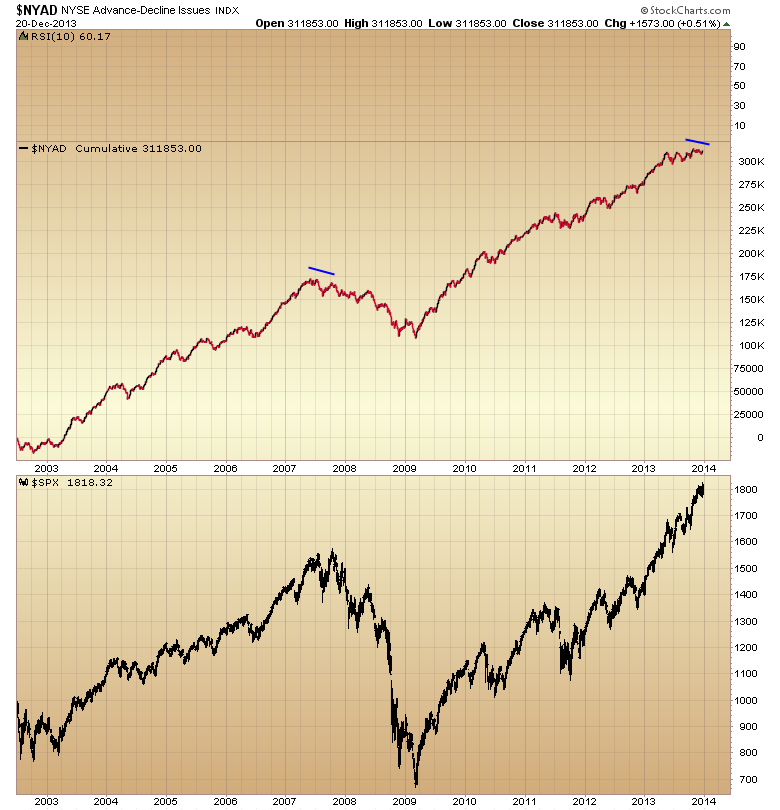 Market breadth is deteriorating. This often happens at intermediate tops. 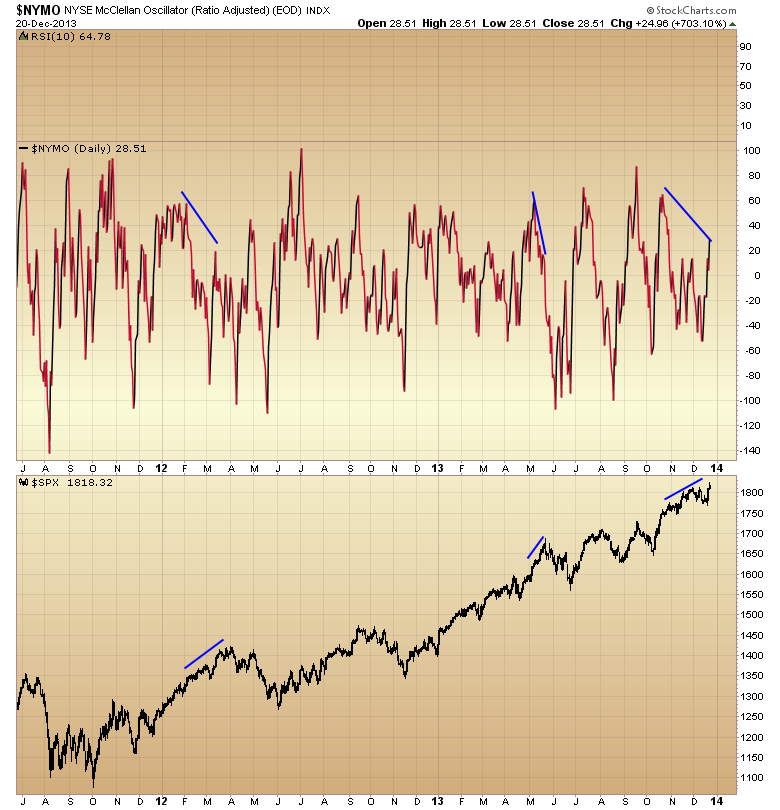 Money flows are also diverging. Another warning sign that is often seen at intermediate tops. 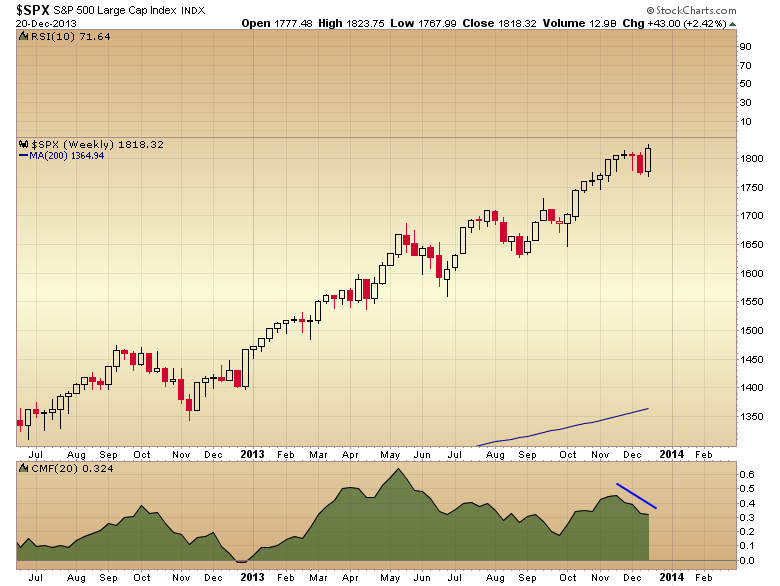 We’ve clearly been in the euphoria phase of this bull market throughout 2013, and I expect this will continue through the end of the year and maybe into the beginning of earnings season. However, I expect we are going to see a very sharp move down in stock prices as we move through January and into early February.

For those inclined to enter short positions or long term put positions in preparation for the next bear market, I think they could do so when and if the NASDAQ reaches its initial 2000 recovery high of 4250. 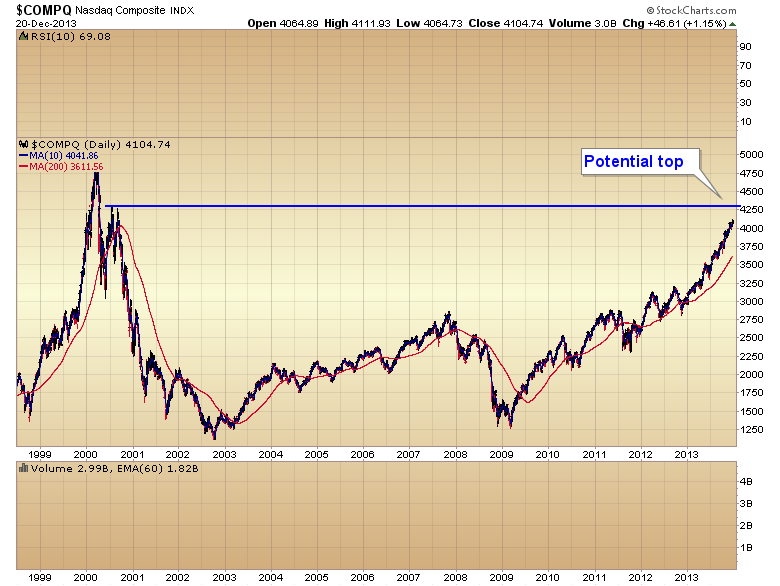 I think 2016 puts on the QQQ or SPY could pay off 1000% or more over the next two years. Remember never risk more than 5-10% on an option position like this.

More in the weekend report