It’s been my contention all along that this cyclical bull would consist of at least three major legs. Now that the S&P has also broken to new highs I think we can safely say the third leg is underway.

That being said the market is due for a move down into a daily cycle low anytime. Sentiment has become extremely bullishly skewed, breadth is deterioating and we are seeing signs that institutional traders are taking chips off the table.

So I’m expecting another brief breather, probably starting next week as I think the market will probably hang in till after options expiration.

The key to the next phase of this cyclical bull is as always the dollar. I’ve been saying for a while now that we are getting late in the dollar’s intermediate cycle. As you can see from the chart despite the powerful rally the dollar still hasn’t been able to move above the last intermediate cycle high and it now appears to be failing at the downward sloping 20 week moving average. 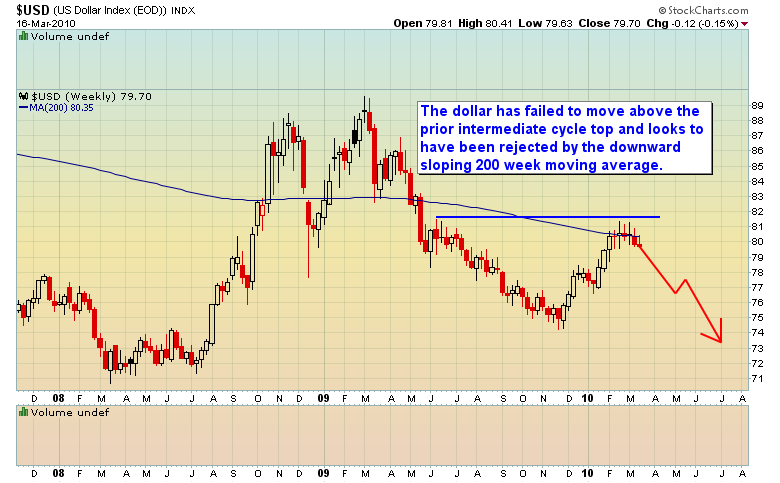 If the dollar is about to begin the trip down into the intermediate cycle low (and I think it probably is) it’s going to act as a big tailwind for virtually every asset class. Actually I expect it’s going to be more like a hurricane driving everything willy nilly before it.
Once we get through the impending correction I expect most if not all assets to enter runaway moves for the next 2 or 3 months. Unfortunately that includes the energy markets. And that my friends is going to ultimately be the fly in the ointment for Bernanke’s plan to print our way out of this mess.