There are three things I watch for as a sign that a correction is imminent. They are in order of importance, cycles, sentiment and money flows.

The current cycle is already stretched to 45 days. Usually this cycle bottoms between 35 and 40 days so you can see we are now overdue for a top. That covers the cycles part of the equation.

Sentiment has now reached bullish levels (contrary sign) that should be enough to force at least a daily cycle correction. We haven’t yet reached the extreme level that is normally required to turn the larger intermediate cycle. In bull markets it usually takes a push to new highs to get to that kind of extreme sentiment level.

Finally I like to see some sign that smart money is exiting the market in preparation for a correction. For me that sign comes when we see a large selling on strength day in the SPYDER’s ETF.

Not surprisingly we now have a volatility coil forming on the S&P chart. 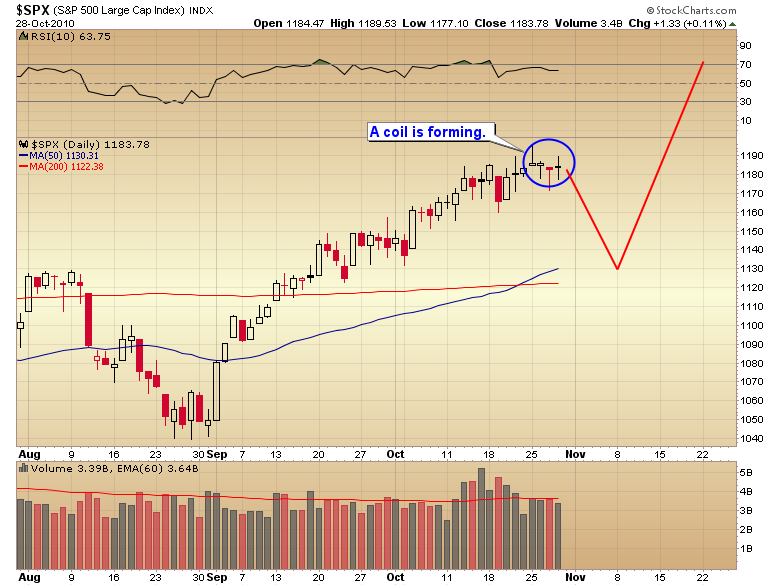 As most of you probably remember the initial move out of a coil is often a false move even though it is usually very aggressive.  Typically the initial move will run 3 to 5 days and then reverse leading to a much more powerful and more durable move in the opposite direction.

Since we are 45 days into the current cycle and we now have all three signs for a correction lined up I think the odds are strong this coil will break to the downside. There are implications for the dollar and gold if this unfolds.

I went over them along with a game plan in tonight’s report so I won’t repeat it here but I think we will likely see a correction soon and since we still haven’t eclipsed Monday’s intraday high it may have already begun.

130 thoughts on “ALL THE SIGNS ARE IN PLACE”