Don’t let the the perma bulls fool you, this is not a normal correction, and it has nothing to do with Greece or Spain. This is the beginnings of the next leg down in the secular bear market and the start of the next economic recession/depression. And this time it’s going to be much much worse than it was in `08.

For months now I’ve been warning investors to get out of the general stock market. I was confident that once the dollar put in its three year cycle low the next deflationary period would begin and stocks would enter the third leg down in the secular bear market.

Well the dollar did put in the major three year cycle bottom in May and stocks almost immediately started to head down.This won’t end until stocks drop down into the four year cycle low due sometime in mid to late 2012.

Let me explain to you what is unfolding so you don’t listen to Wall Street or CNBC and get sucked down into the next bear market. 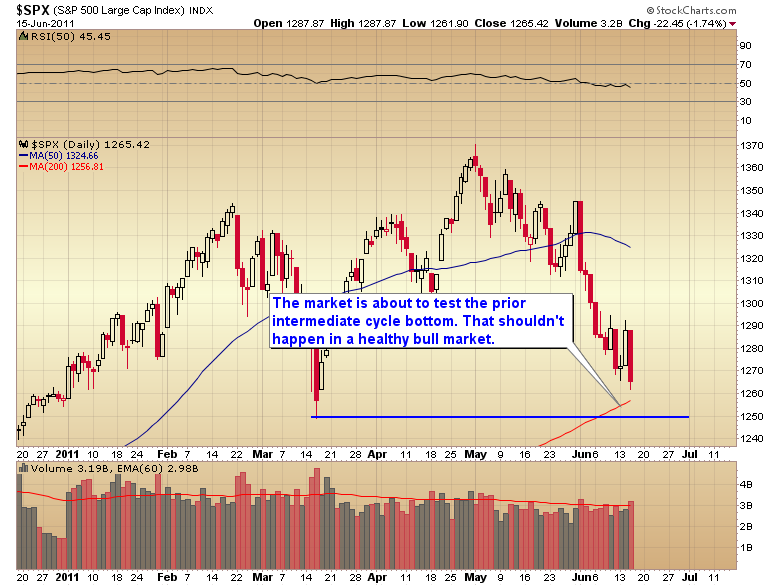 Oil has already violated it’s intermediate bottom. Energy stocks are a big part of the S&P and they are going to be a big drag on the index going forward. 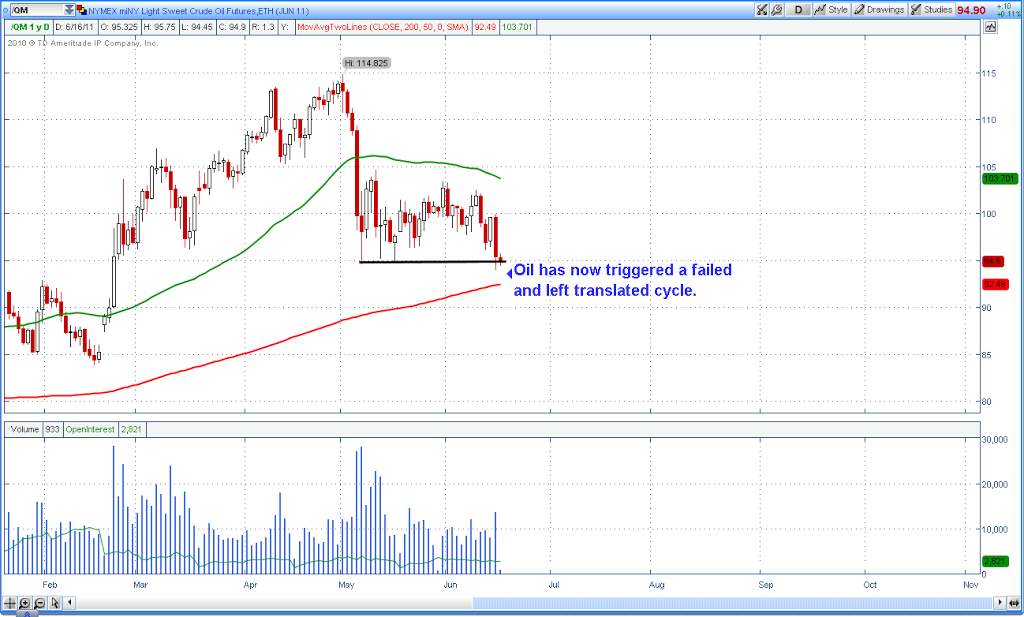 In a healthy bull market we shouldn’t even come close to testing the March low. Actually this market hasn’t been healthy since last summer. That was the point at which I recognized the large megaphone topping pattern that was being driven by a double dose of QE. 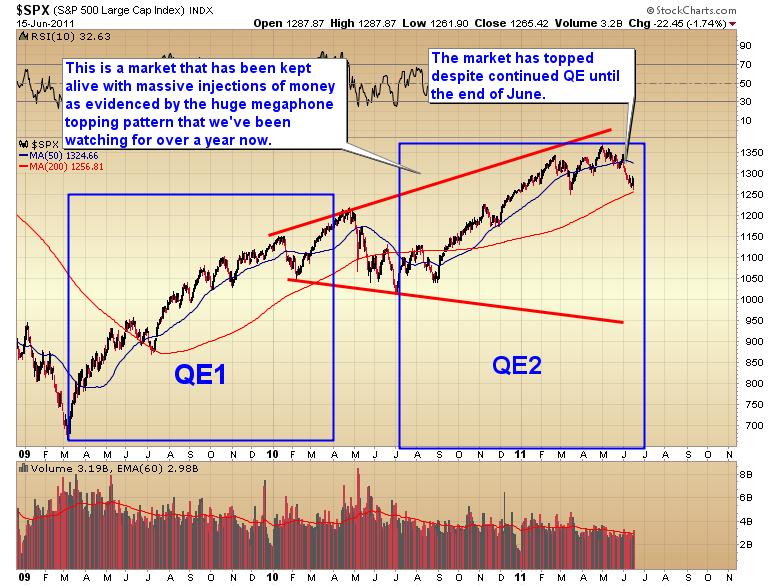 Last year the market was able to push higher for almost a month on momentum after QE1 ended. This market has already rolled over even though QE2 isn’t scheduled to stop until the end of June. The conclusion is that the market is much weaker now than it was when QE1 ended. We all know what happened last year when the the money pumps were shut off. It led to the flash crash and a severe stock market correction. It would have led to a new bear market except Bernanke quickly started QE2.

Actually QE is the reason the market is in trouble. Just like I said over two years ago, all QE did was give us a brief reprieve and temporarily reflated asset markets. I knew all along it wouldn’t create jobs and it didn’t. (Well I guess a few bankers got to keep their jobs and pay themselves some big bonuses, but the general population was never going to prosper from QE.)

Unfortunately we are entering this recession in a much weaker state than we went into the last one. Real unemployment is somewhere around 12-15%. It is going to get much, much worse. I often wonder how in the world we could appoint such fools to run our monetary policy. I mean seriously, how many times must they make the same mistake before they figure out they are the cause of our problems?

Ok enough of the Fed rantings, back to the market.

Not only do we have a market that is testing the prior intermediate cycle low when it shouldn’t be, but we also have a clear topping pattern in place. Just like in `07 the market managed a marginal breakout to new highs in May that failed to follow through. You can see the same thing occurred in October of `07. This is quite often how markets top…or bottom for that matter. A technical level is breached, technicians either buy the breakout or sell the breakdown. Smart money fades the move and the market reverses. This is exactly how the `07 top was formed. It’s also how the market bottomed in `02. And now the cyclical bull has topped with that exact same reversal pattern in 2011. 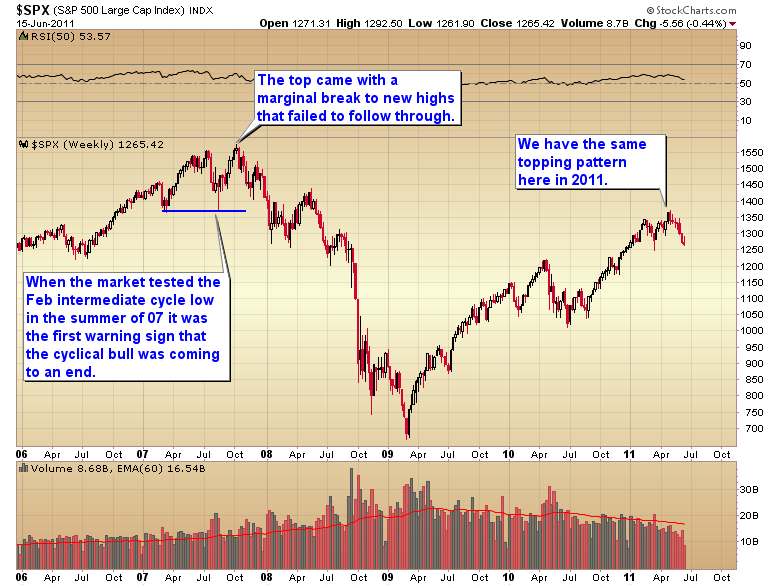 This isn’t the only warning sign unfortunately. The banks and housing have been diverging from the rest of the market for some time. These two sectors are still impaired and will remain so no matter how much money the Fed throws at them. They led the market down into the last bear and they are leading it into the next bear. 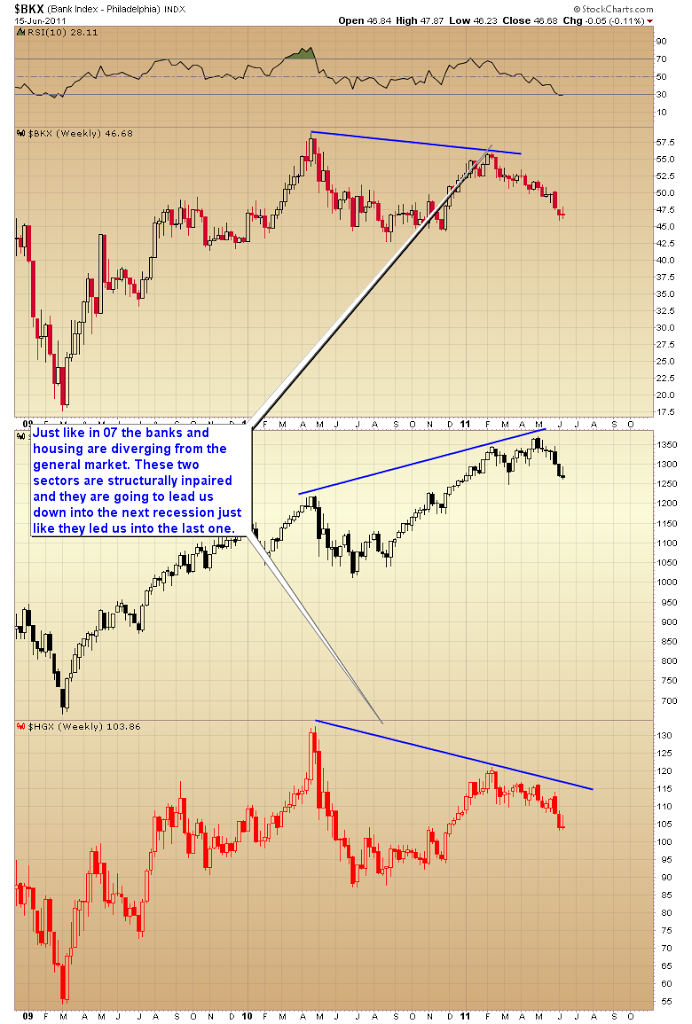 Here is what I expect to happen over the next two months. We should soon test the 1249 intermediate cycle low. Actually I think we will probably marginally break below that level. As most of you probably know by now breakdowns and breakouts almost always fail to follow through. So I expect we will see a violent counter trend rally once the March low is penetrated. That should wipe out all the technicians who sell into the breakdown. 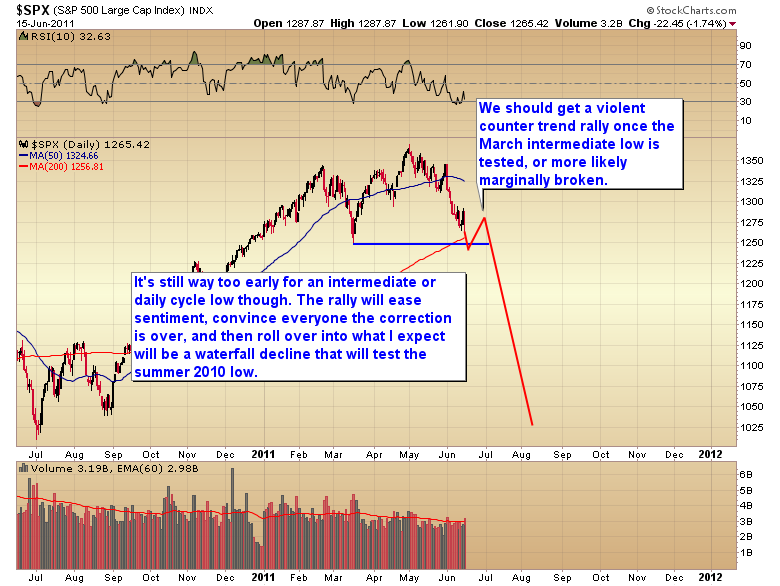 However the rally, although I’m sure it will be convincing, will almost certainly be a counter trend affair that will quickly fail. The problem is that the current daily cycle is only on day 12. That cycle on average runs 35-45 days trough to trough. So once the counter trend rally has run it’s course we should have another leg down. And that leg down will almost certainly cause tremendous damage to the global stock markets.

Once the market penetrates the coming low it shouldn’t be long before traders recognize that something is terribly wrong. At that point everyone is going to head for the exits at the same time which should lead to some kind of waterfall decline bottoming around the middle of August. This is when I expect Bernanke to freak out and initiate QE3. I have no doubt the market will rally violently on the news as traders have become conditioned to expect QE to drive stocks higher. I expect we will see the market test and maybe even penetrate the 200 day moving average during the fall rally. 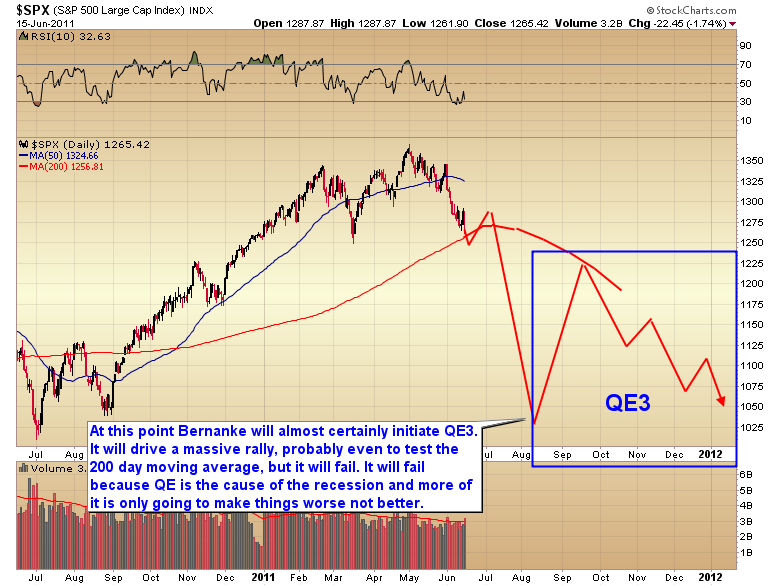 However this too will only be a counter trend affair. QE is the cause of our problems and more of it isn’t going to make things better, it will only make them worse as it will start to spike commodity prices again into a rapidly weakening economy. Remember spiking commodity inflation is what caused this in the first place. Doing it again as the economy rolls over into recession is only going to guarantee that this turns into a depression instead of just a severe recession.

Traders and investors need to start preparing for what’s ahead. If you ignored me previously and are still invested in the general stock market, exit, either now, or into the rally that should come off the March lows in the next week or two. Don’t get fooled by the analysts who will be telling you the correction is over, it won’t be. This won’t be over until late July or early August.

Get back into dollar denominate assets as the dollar will continue to rally and gain purchasing power in a deflationary environment.

Once it’s appropriate we will transfer assets back into gold and precious metals, but it’s still too early for that. Gold needs to move down into an intermediate cycle low before we want to buy. My best guess is gold will dip down to somewhere around $1400 over the next 4-5 weeks. I am monitoring not only the stock market but also the gold cycle in the premium newsletter and will let subscribers know when I think it’s time to get back into precious for the next ride up.