It may not seem like much happened yesterday, but a very important event occurred. Yesterday the dollar index breached 78.65. The reason that is significant is because 78.65 marked the intraday low of the prior daily cycle. A penetration of that level indicates that the current daily cycle has now topped in a left translated manner and a new pattern of lower lows and lower highs has begun. Any time a daily cycle tops in a left translated manner it almost always indicates that the intermediate cycle has also topped.

In this case it would indicate that the intermediate dollar cycle topped on week two and should now move generally lower for the next 10-12 weeks, bottoming sometime in late June or early July, about the time Operation Twist ends 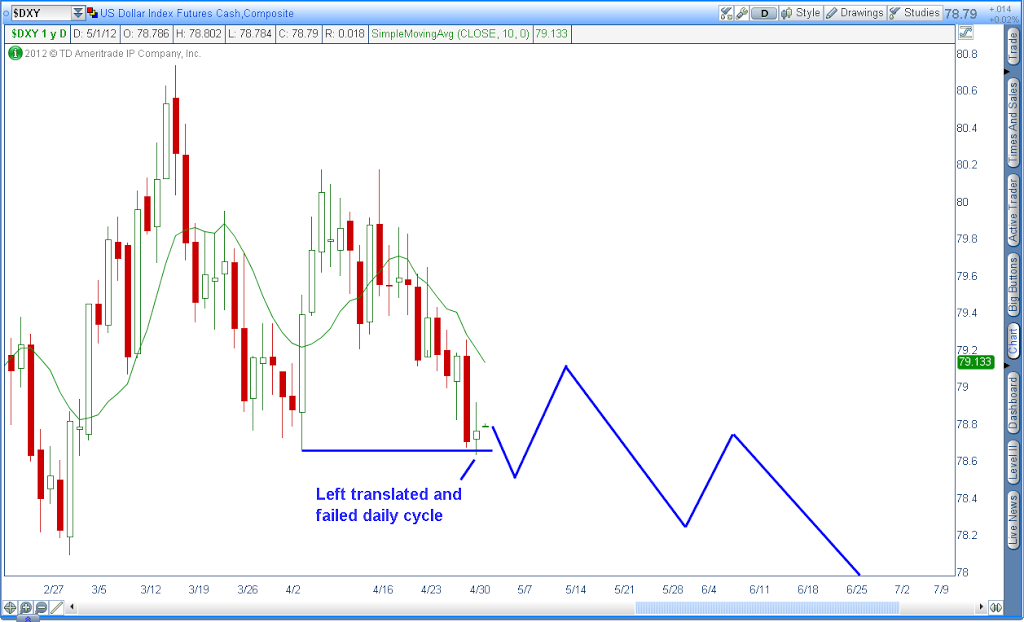 Now that we have confirmation that Bernanke has broken the dollar rally I’m confident in calling April 4th an intermediate bottom (B-Wave bottom) in the gold market. Gold should now be entering the consolidation phase of the next C-wave. I expect a test of the all-time highs sometime this summer as the dollar moves down into its intermediate bottom. 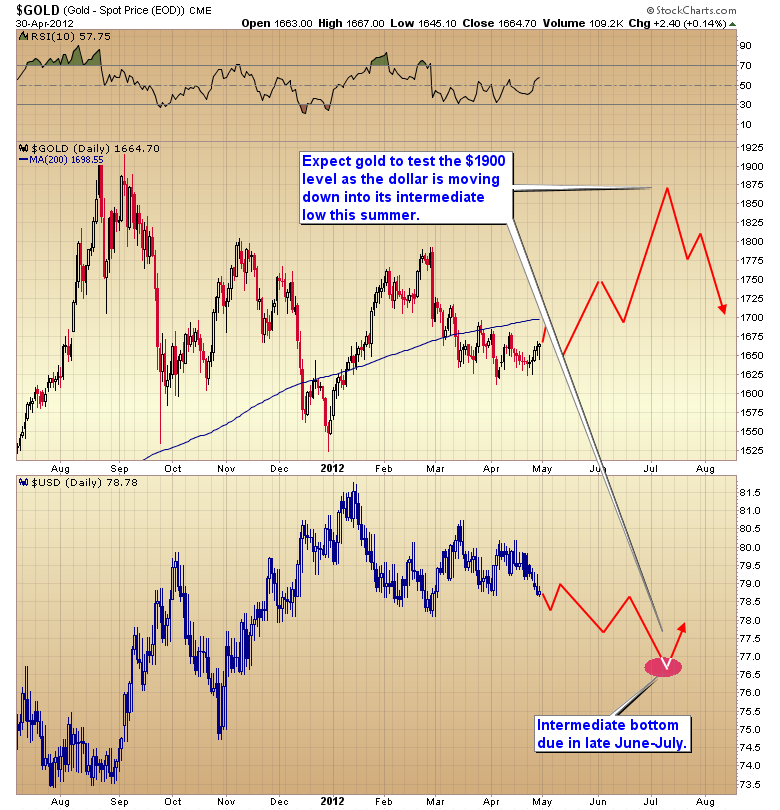 That being said I have no interest in a 15% rally in gold. The real money will be made as the mining stocks exit their bear market, re-enter the consolidation zone between 500 and 600, and move up to retest the old highs. It’s not inconceivable that we could see a 30-45% gain in mining stocks over the next 2 1/2 months.

Sentiment in the mining index has reached the same levels of bearishness that were seen in the fall of 2008. That black pessimism drove a 300+ percent rally over the next two years. I have little doubt this time will be any different.

Now what we need to see is a change in character. We need the mining stocks to stop generating these sharp bear market rallies and transition into the wall of worry type rally that characterizes a bull market. So far that is exactly what is happening. The miners are rallying very hesitantly, and as long as this continues it will camouflage the move and keep sentiment depressed. That’s exactly what we need to happen to drive a long sustained rally back up to the old highs.

The problem with the rocket launch type rallies we’ve seen over the last year and a half is that they swing sentiment very quickly to the bullish side and we run out of buyers.

As long as the bottoming process proceeds gradually I think there’s a very good chance the HUI could break back above the 200 day moving average, and possibly test the 600 level by mid-July. 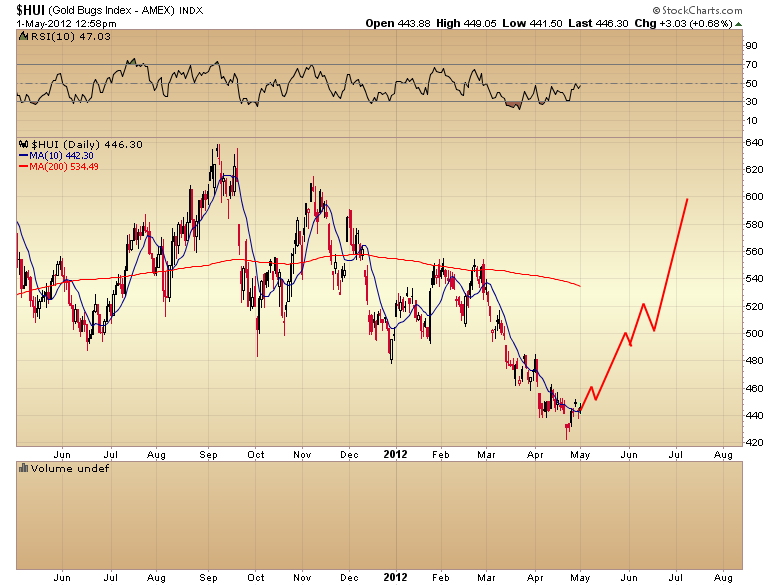 So far all of the pieces are starting to fall in place to initiate the very early stages of what I think will eventually become another huge momentum move similar to what happened in silver and gold last year. Ultimately culminating in a parabolic blowoff top sometime in late 2014 as the dollar moves down into its next three year cycle low. 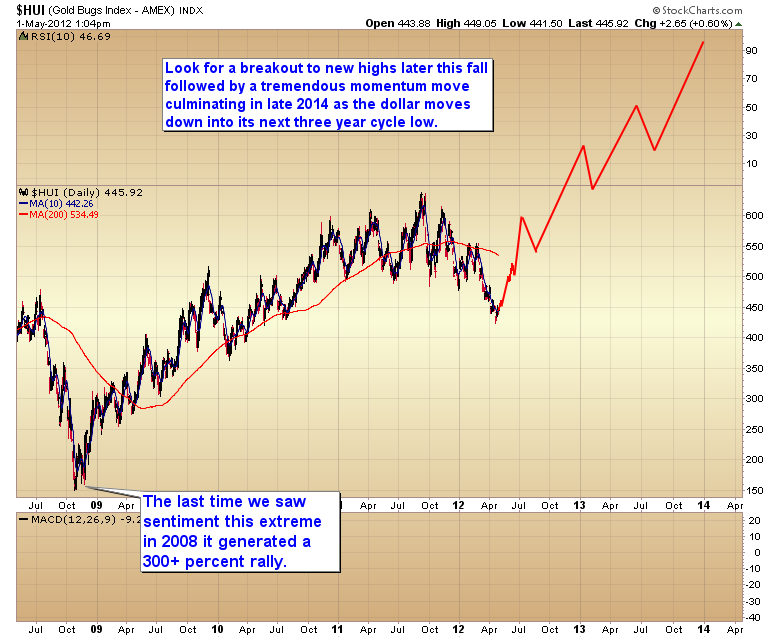 Now is the time to invest in this sector as it struggles to transition from a bear market back to the secular bull trend. The time to enter is at the very beginning when no one believes. This is when the really big money is made. If you wait till your emotions give you the all clear, half the move will be over.

Most traders are going to jump back into the general stock market, or tech stocks. You have to be smarter than that. The stock market, including tech, have already generated a massive move out of the October bottom. That kind of move usually leads to a multiweek, or month, consolidation. The odds of another 20 to 30% rally in the stock market are very slim.

The odds of a 20 to 30% rally as the mining stocks resume the secular bull trend are extremely high.

The combination of extreme downside momentum, and irrational human nature has created the kind of oversold conditions and extreme undervaluation that generates an opportunity that only comes around once or twice a decade.

The $10 one-week trial for the premium newsletter will be available for the rest of the week. Click on the subscribe link on the right hand side of the homepage.

58 thoughts on “THE INFLATION TRADE IS ON: BERNANKE HAS BROKEN THE DOLLAR RALLY”