Just another quick post tonight. As I have been saying for over a year now, the dollar will not make new highs, and it will collapse as the consequences of QE infinity ultimately take their toll. 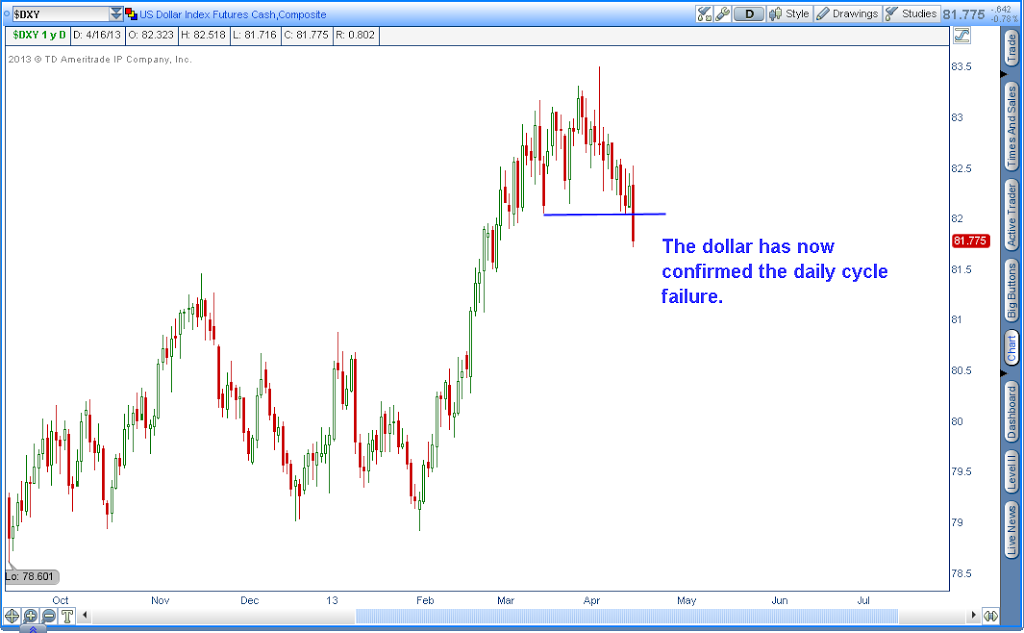 As I’ve been saying for months, the dollar rally was a mirage. The only reason the dollar index was strong was because the yen, euro, pound and Canadian dollar were all moving down into intermediate or yearly cycle lows together. That gave the illusion that the dollar was rising. The dollar was simply benefiting from people selling everything else.

But now it’s the dollar’s turn. Let’s face it, in the real world you can’t print unlimited amounts of money and not have something bad happen. The real world just doesn’t work that way. Maybe in fairy tale land were magic works, but not here in the real world.

Over the next 2-3 months we will see the dollar drop down to, and I fully expect it to crash through support at 78.60, and maybe even test the 2011 lows. Of course that is only the beginning. Before this is done we will have a full blown currency crisis in the US dollar at the next three year cycle low that is due in late 2014. Who knows how much damage will be done during that catastrophe. I expect we will see something similar to what is happening to the yen right now.

As a matter of fact the yen is only the first of what will almost certainly be a rolling crisis as the cancer works it’s way up the food chain from the yen, to the pound, and finally the dollar.

Brace yourself folks, it’s time the lipstick comes off this pig, and it ain‘t going to be a pretty sight.