The stock market is finally starting to show signs that the bull market may be coming to an end. Before I go into the stock market though, I want to discuss the dollar, because I think currencies are going to be integrally tied to the topping process.

For the better part of the last five years a lower dollar has generally been positive for the stock market. However we are now five years into QE and I think we are at the point where it’s important that the dollar hold its value. At this point I think the stock market is deathly afraid that the dollar is going to crack under five years of continual debasement. As many of you have probably noticed over the last several weeks stocks have been dropping along with the dollar.

We have some interesting currents at play in the currency markets at the moment. It’s been my opinion for some time that the dollar would migrate its yearly cycle low from the spring to later in the fall (This will set up next year’s yearly and three year cycle low to occur late in the year. This is generally when currency crisis occur). I think that process is now in play. For this to come to fruition the dollar needs to move below the February low sometime in the next two or three weeks. Keep in mind that other than a three year cycle low, the yearly cycle low is the most intense sell off of the year, and they don’t generally terminate until it looks like the world is coming to an end. (We definitely haven’t reached that point yet.)

I suspect the government shutdown and debt ceiling debacle are going to intensify the dollars yearly cycle low this year. This suggests that we are going to see a very aggressive and scary decline in the dollar index over the next 2-3 weeks. 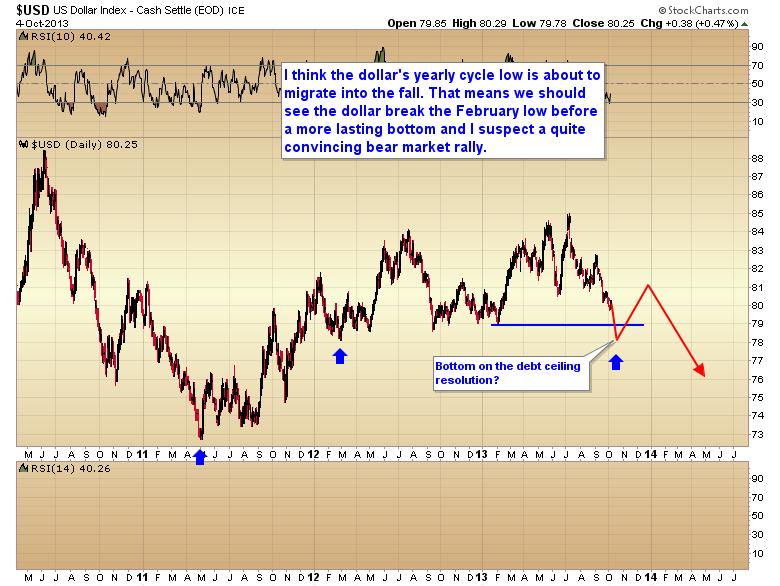 I’m expecting the yearly cycle to bottom either on the debt ceiling resolution, or one day on either side of it as the market starts to sniff out a deal. At that point I think we’re probably going to see a significant intermediate degree rally as the currency markets breath a sigh of relief.

However within 1-2 months I also expect the currency markets to come to their senses and realize that nothing has changed and the dollar is going to continue to be debased, maybe even at a faster rate than before. At that point I think the dollar will roll over again and get busy moving down into next year’s three year cycle low which should manifest as a moderately severe currency crisis around this same time next fall.

Now for some of the warning signs in the stock market. To begin with this is the first time in five years that the advance decline line has failed to follow the market to new highs. 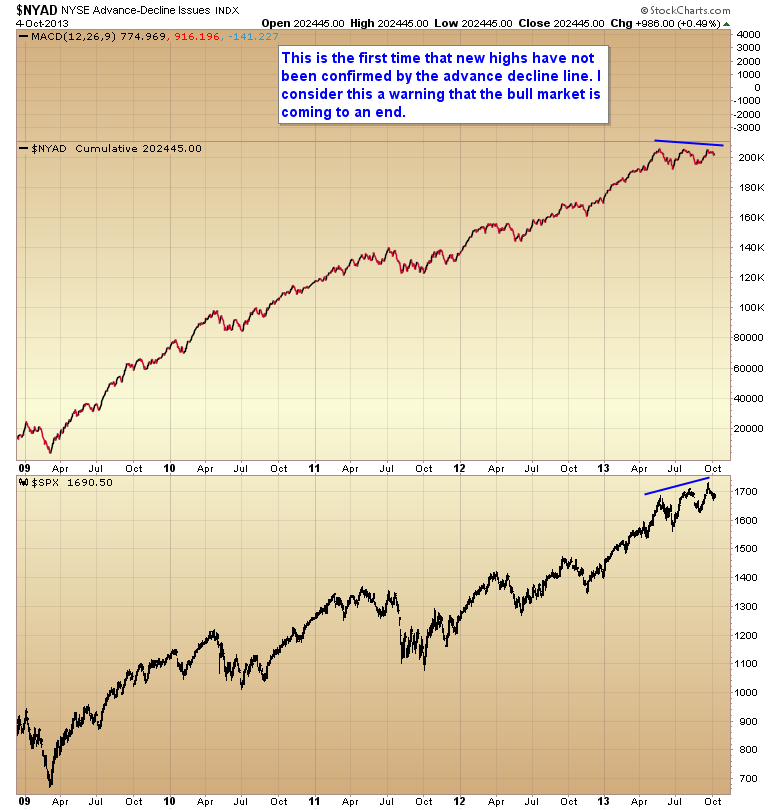 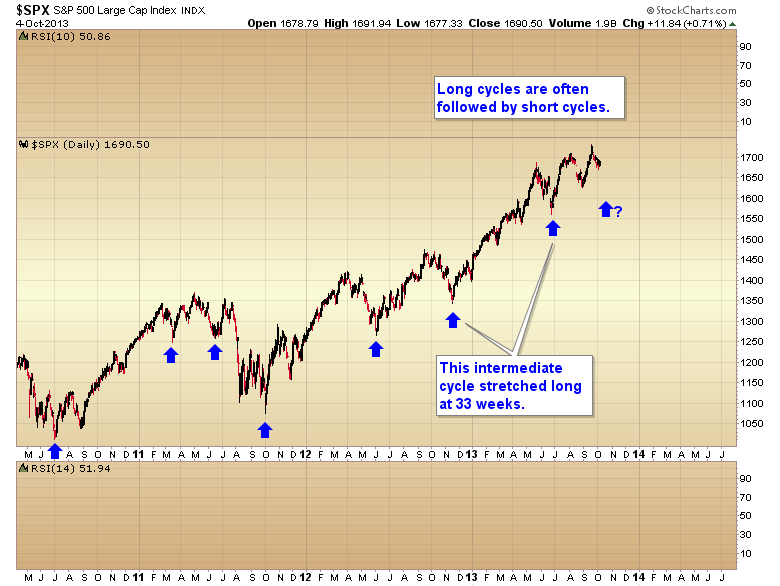 Considering that the current daily cycle is already on day 25 and due for a bottom somewhere between  day 35 and day 40, I think the odds are good stocks will follow the dollar down as it makes its yearly cycle low and complete an intermediate degree decline as we move into the debt ceiling deadline on October 17. Since intermediate declines need to be large enough to create true panic, this suggests that we could be in store for a particularly rough 2-3 weeks, as investors start locking in profits ahead of the uncertainty around the debt ceiling and the government shutdown. This process could spiral out of control if the dollar really starts to cratered hard. 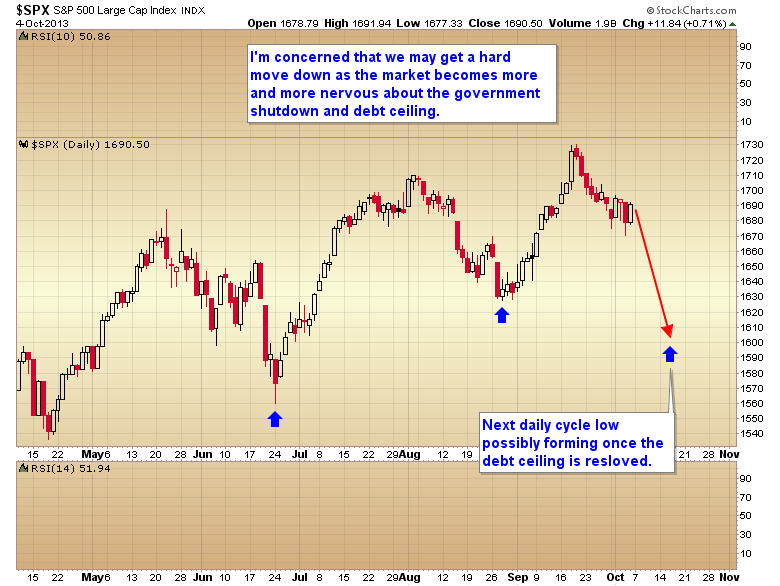 The closer we get to that deadline with no resolution the more likely the market is to panic, and I wouldn’t even rule out the possibility of some kind of semi-crash as we move into the final days up to the deadline as Wall Street let’s Washington know in no uncertain terms they need to get their act together, and do it fast.

I’m even starting to entertain the idea that this will be the initial top of this five-year bull market, although I do expect the topping process to draw out the better part of a year as the Fed will without a doubt increase QE above and beyond its current level in the attempt to stave off the bear market. 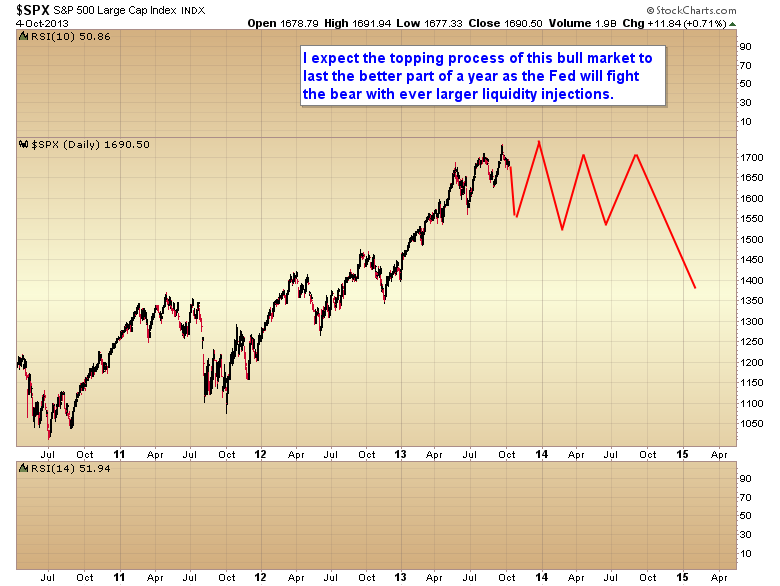 For a more detailed explanation of what I think is coming I invite you to try a one week trial to the SMT premium newsletter and reference the current weekend report.