As I have been expecting for almost a year now the Nasdaq has finally reached its all-time highs at 5100. 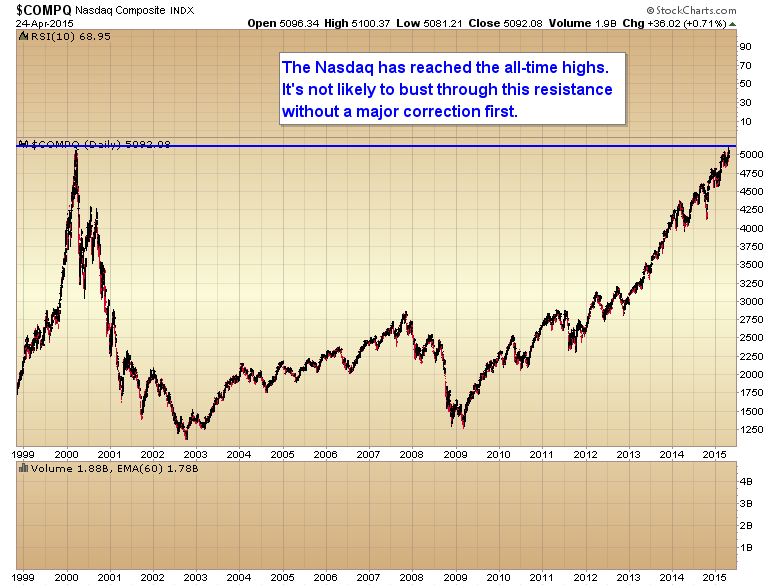 That being said, the 5100 level is a huge resistance zone. It has held for 15 years. The bull is very mature at 6 years old, and without the benefit of further QE to continue driving it I really doubt we are going to get a sustained move above 5132. So I expect the stock market is going to top this year. I’m not expecting a sustained move above 5132 until stocks suffer a major multi-year cycle low. Something along the same lines as 2002 & 2009. At the very least we should experience a 38% Fibonacci retracement of this bull run before breaking through that resistance and producing the next bubble. 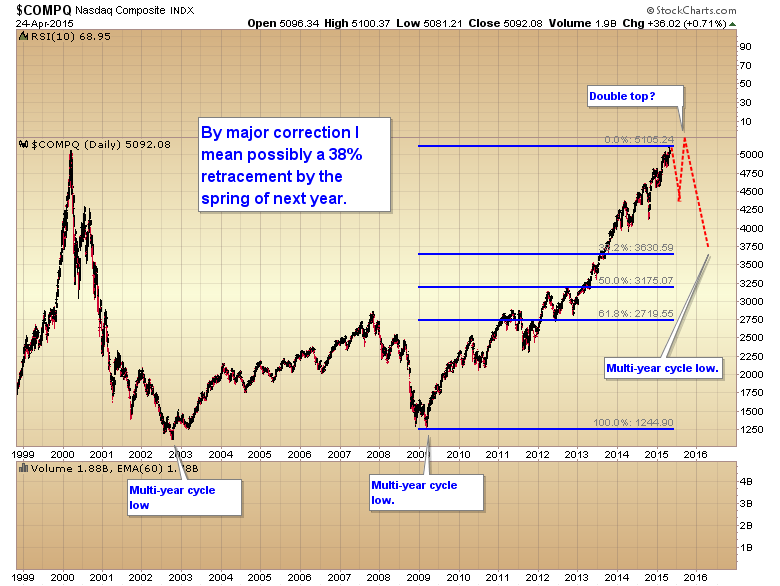 Don’t get me wrong I think there is still good money to be made in stocks this year, but traders will need to be patient and wait for daily and intermediate cycle corrections before buying, and they will need to sell once the market retests the 5100 high.

The current daily cycle is getting mature at 31 days; that along with the 5132 resistance zone should force a smaller daily cycle top next week, and a move down into a cycle low by the May employment report. Either AAPL’s earnings release on Monday or the FOMC statement on Wednesday could force a top. 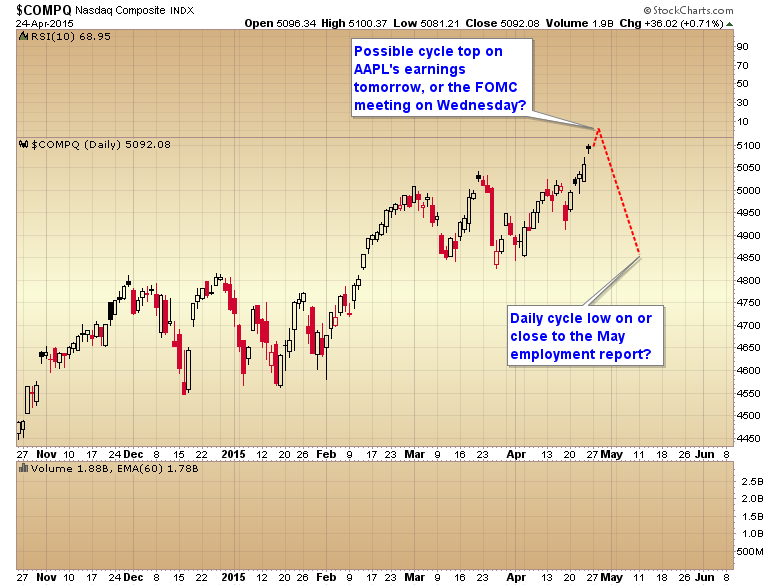 Traders should be in cash this week and just waiting patiently for the correction down into the cycle low (selling short is out of the question as the Fed could abort or stretch the cycle low). Assuming the market is allowed to correct naturally over the next 2 weeks there will be a buying opportunity at that cycle bottom for another run back to, or marginally above 5100. 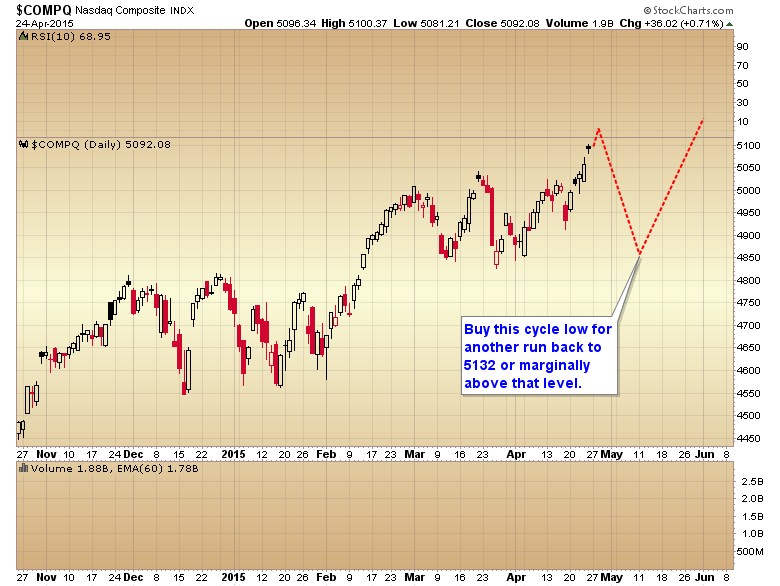 At that point a second failure to breach resistance should trigger a larger intermediate degree correction as the market starts to anticipate poor second quarter earnings. One that should retrace 50-100% of the last intermediate rally out of the October bottom. 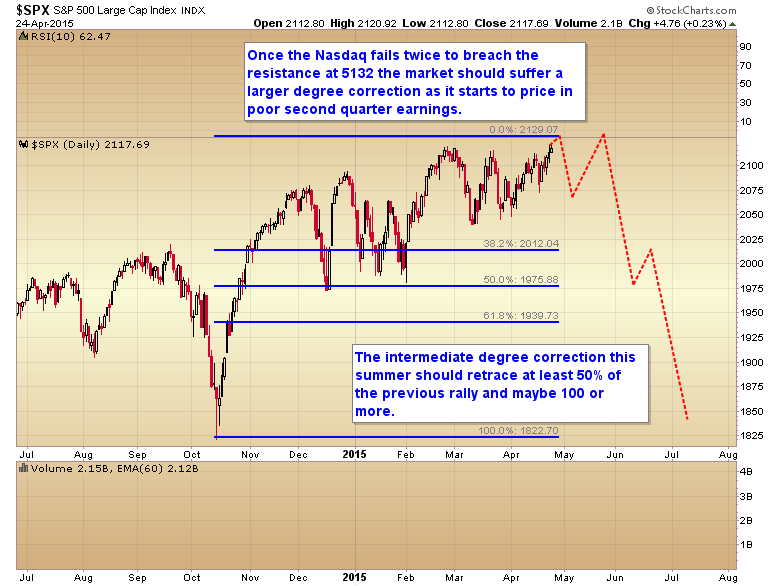 This should prove to be the second (and probably last) great buying opportunity of the year as I expect the Fed will start talking extremely dovish, and probably even initiate an intervention to prop the market up. Either way traders should buy this bottom for a third run up to resistance at 5132. This time we will almost certainly see at least a marginal breakout above 5132 as the big money players manufacture new highs to suck in retail buyers and allow them to unload their long positions at the very top of the bull and get short. 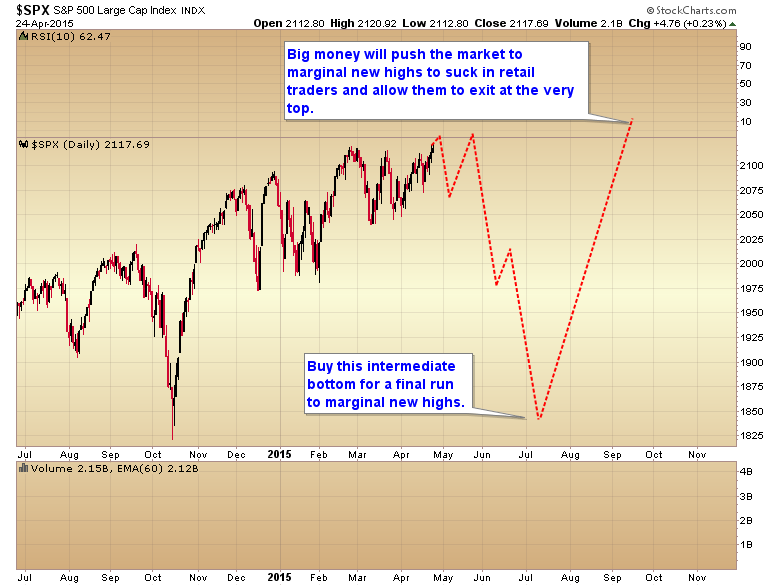 Once the third test at 5132 fails then it will be time to abandon the stock market as the easy money will be over and the market should begin moving down into the multi-year cycle low with a probable bottom next spring. This is where we should expect at least a 38% retracement of the cyclical bull, and at some point the beginning of QE4 as the Fed panics when they are unable to stop the sell off with just talk or minor interventions. 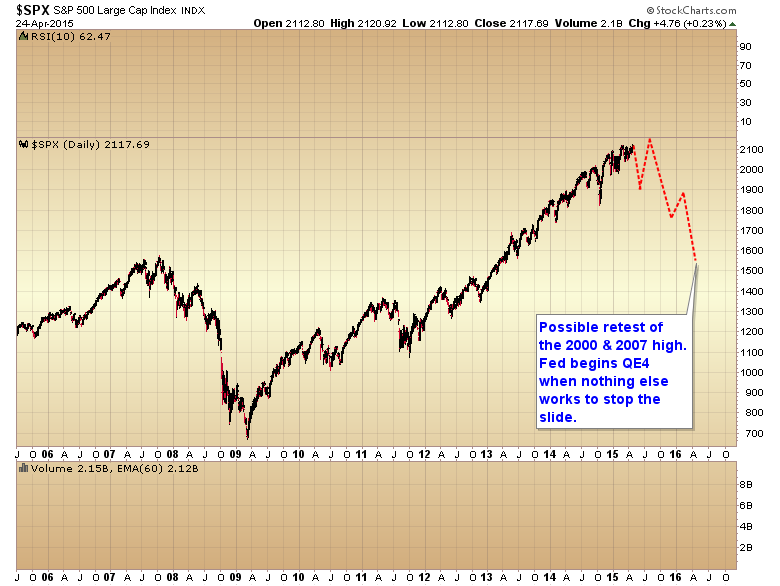 Once QE4 begins the next leg, the bubble leg, should begin and biotech should produce a true parabolic bubble into 2017 or 2018. 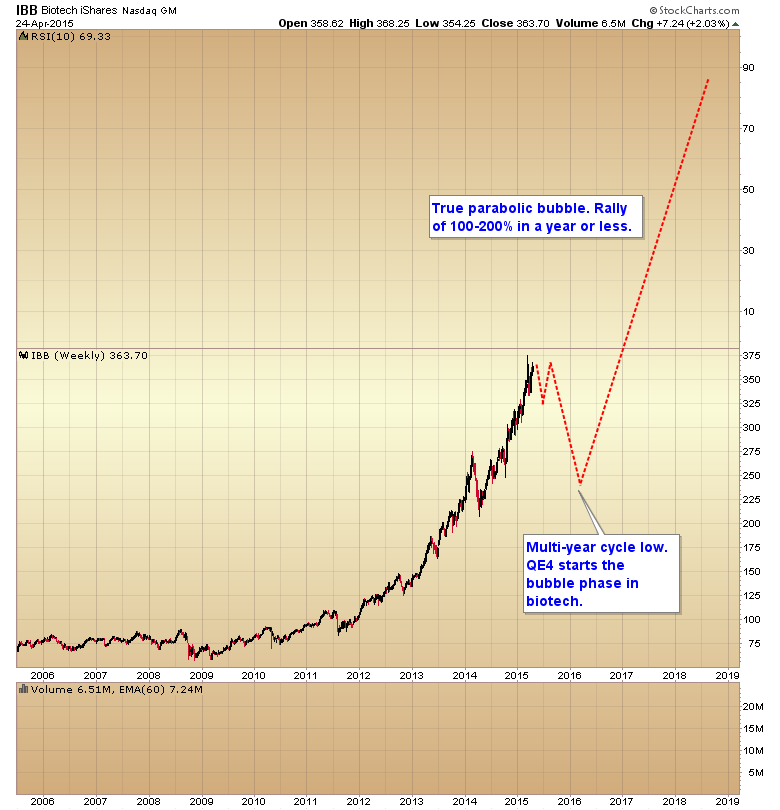 For the rest of the year traders need to be choosy and play the stock market only at cycle lows when sentiment is extreme.