One of the hardest, but probably the most important traits for a trader to learn is patience. I’ve seen this over and over throughout the years. Traders invariably give up right before a big move is ready to start. Either because the market chopped sideways for too long, or because price suffered a big correction. I’ve noted before markets act like a pendulum, the further price gets stretched in one direction the bigger the move can be in the other direction once the trend reverses. But there’s another pattern that can also produce a big sustained trending move and that is a long frustrating sideways basing pattern. This is a very familiar pattern during an intermediate cycle low in gold. Often there are 3 to 6 weeks of sideways chop followed by one final push down (the bloodbath phase) that causes dumb money to stop out and give up. This is the period where we start to see a lot of analysts jumping on the bear bandwagon and predicting lower prices for the foreseeable future. Does this sound familiar right now? That of course is the fuel for the next rally, and depending on how deep the correction is or how long the sideways chop the next rally can be extremely profitable.

It continues to be my opinion that the dollar started a cyclical bear market a year and a half ago. But for the bear market to continue we needed to clear the bearish sentiment that had developed by the beginning of this year. As you can see that has now been accomplished. The two month rally has gotten everyone back on the bullish side of the boat and we now have the fuel to start another leg down. It’s my opinion that the next leg down in the dollar will drive a breakout from the basing pattern in the metals market. 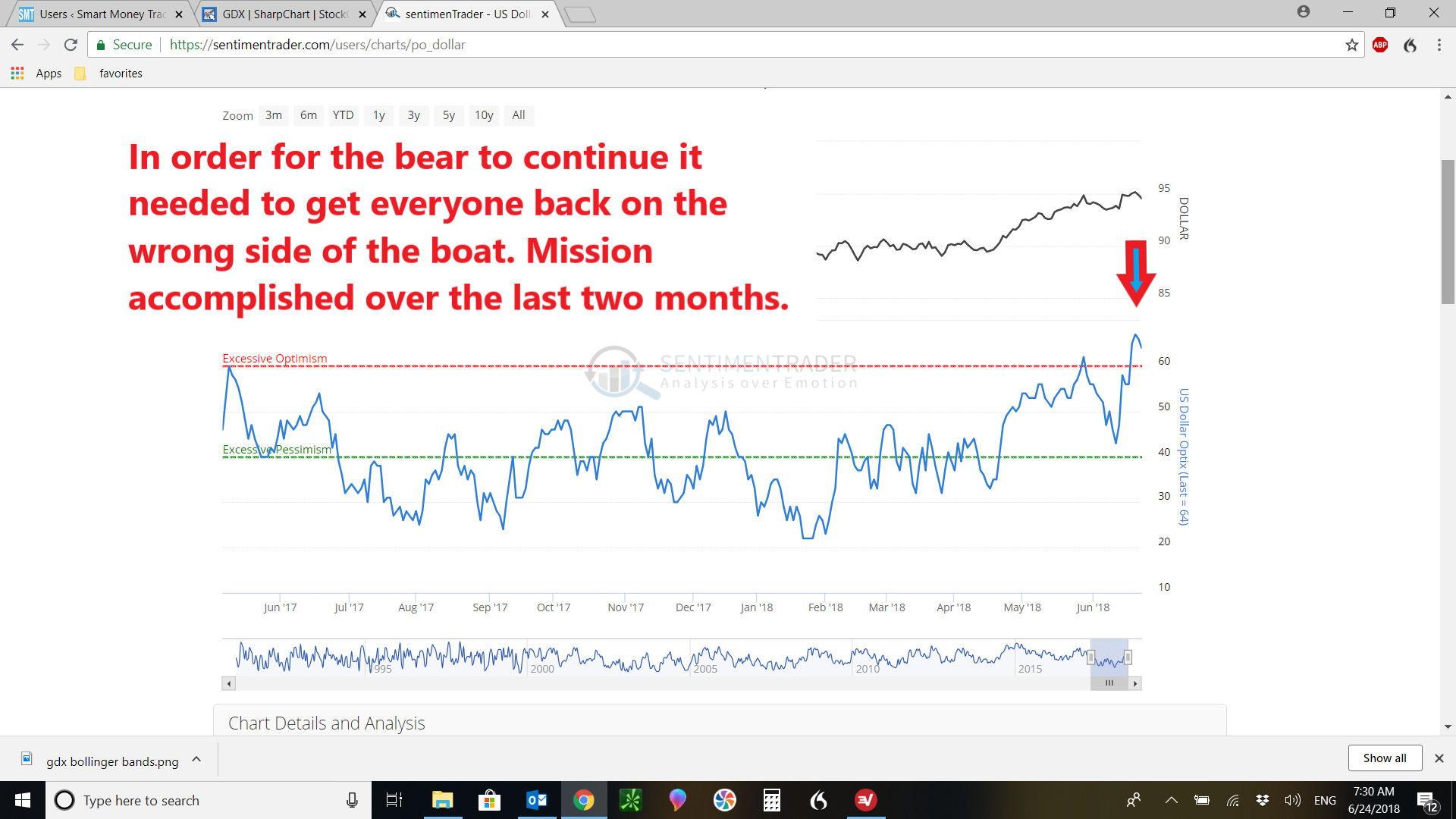 As I mentioned, a strong trending rally can be driven by either an extremely deep correction or a long period of sideways consolidation. Look at this next chart of GDX. That’s almost 2 years of going sideways, and I can tell you it has completely squashed sentiment after the high expectations generated by the baby bull. This is exactly what we need to see in order to produce the fuel for the next big move up. But I can tell you without a doubt the vast majority of gold bulls have become frustrated and have thrown in the towel, and most of them are going to miss the next rally just like they missed the baby bull. 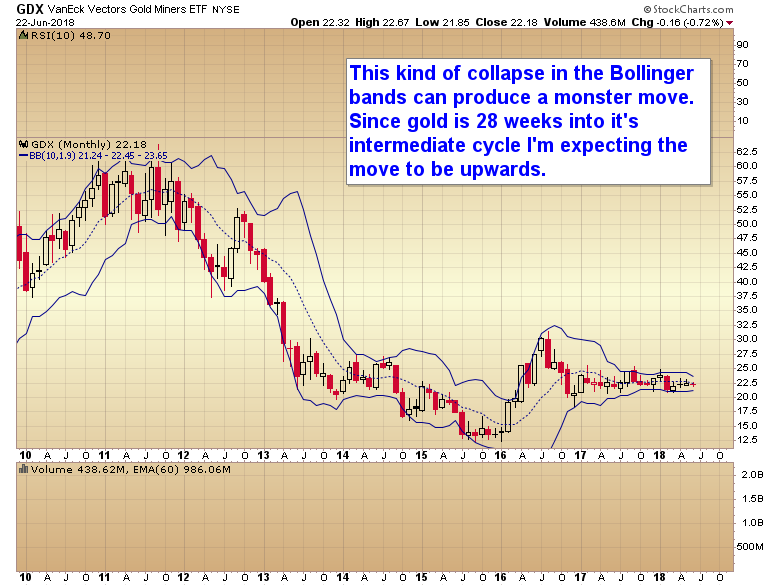 That collapse in the Bollinger bands is unprecedented over the last 18 years, and it has the potential to produce a rally similar to the baby bull. The fact that gold is 28 weeks into its intermediate cycle and now due for an intermediate degree rally pushes the odds very much in favor of the breakout from this volatility squeeze being to the upside rather than the downside. I’m betting July is going to be an interesting month for precious metals investors, but most are going to miss the move because they’ve become disillusioned with the sector. That’s exactly how a bull market shakes off most riders before the next leg up begins.

Most retail traders have such short attention spans that if the move doesn’t happen in the next day or two they give up. Very few have the determination or focus to stay on target long enough for the move to begin. Often one will have to stay focused and keep trying for 4-5 weeks, not the 2-3 days that most dumb money traders allow before giving up.

I love this video from the big short. It illustrates exactly what happens at every one of these major intermediate cycle lows. If the move doesn’t unfold immediately traders give up and go looking for greener pastures. People start emailing me that I’m wrong and an idiot for thinking the trend could ever reverse. Eventually the trend does reverse, a rally unfolds just as I predicted it would, and just like Michael Burry by the time it’s all over we change the tote board while most people just miss another great opportunity. Currently the SMT metal portfolio is only about $100 below it’s all-time high and positioned for the next leg up once the trend in metals reverses. We’ve been steadily increasing the portfolio from $100,000 at the start of 2016 to well over $500,000 currently. Throughout that entire process at every single intermediate bottom the vast majority wouldn’t listen to me. Consequently almost no one has profited from my ability to call these bottoms. Are you going to again be one of those that gets left behind by the bull, or are you made of different stuff than the majority of traders? Do you have the discipline to stay focused however long it takes, and get in at the beginning of a major trend? Or will you chase it three or four months later after the majority of the profits have already passed you by and then get caught at the top once the rally is over?