No matter how many times I call these intermediate bottoms dumb money never listens to me. Back in February when I kept telling people this was not the start of a bear market as there was no catalyst, I can’t tell you how many emails I got telling me I was an idiot and that the market had topped. Well as usual we can see I was correct again and this was not the start of a bear market. It was just a normal correction after a very powerful rally out of the 2016 elections. The idiots were the perma bears who appear to be determined to miss an entire secular bull market because they can’t let go of the memory of 2009.

No one would listen to me back in February when I called the bottom in stocks. Now 17 weeks later with the Nasdaq nearing the all time highs and the Russell breaking out to new highs, now people are ready to listen. Seriously folks, now after 17 weeks you’re ready to buy? Where were you back in February when I was calling the bottom? 17 weeks is too late to start buying. Any breakout to new highs this late in the cycle isn’t going to be sustained. It’s too late. You missed the boat…again.

Now is the time to be buying metals. Gold is 24 weeks into it’s intermediate cycle and deep into a correction. I’m getting tons of emails telling me I’m wrong about gold (just like I got about stocks in February). This is the time to start getting positioned for the next 3-4 month rally in gold. But as usual few will listen to me. No one ever does at these bottoms. They wait 17 weeks before they finally figure out I was right. So many of you are just hopeless. Forever making the same mistake over and over. This has happened so many times now that it’s just becoming hilarious. When I start getting the emails and people start cancelling it’s a sign the perpetual losers are about to get fleeced again.

So here we go again. I told you so about the stock market.

Three months from now after we’ve added another huge pile of money to the metal portfolio I’m going to tell you I told you so again.

Are you ever going to learn?

I’m a contrarian. I buy low and sell high.

Dumb money buys at tops and sells at bottoms.

Are you ever going to change so you can start making money? 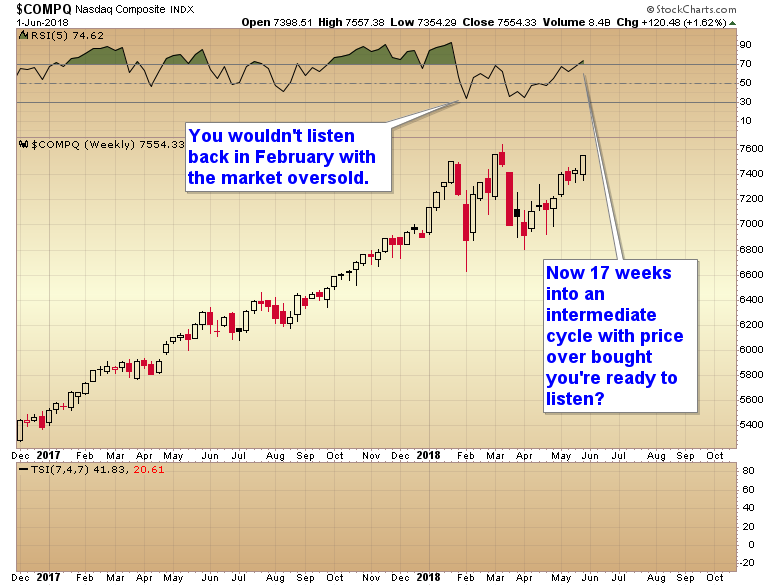 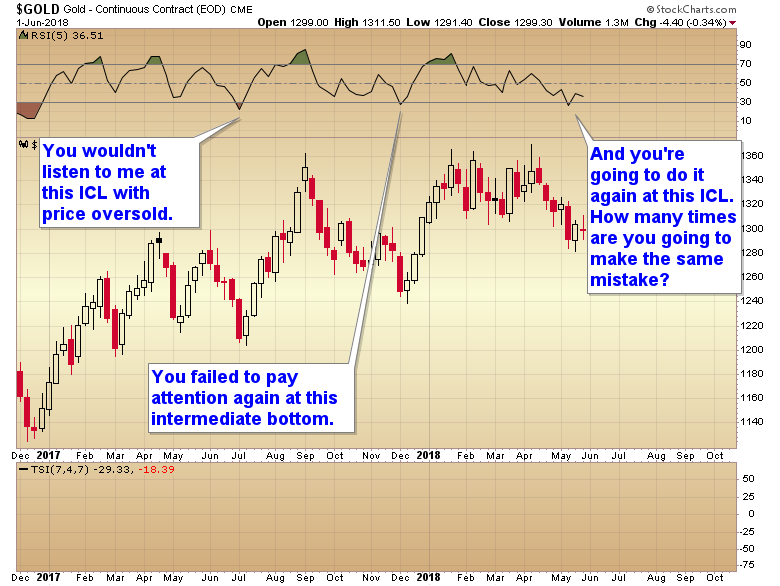