We’ve been having quite the discussion about manipulation on the blog lately. For what it’s worth everyone can believe what they want to believe. What I do know is that no amount of manipulation can stop a secular trend. I think Greenspan and Bernanke have proven that fact explicitly. Between the two of them they have printed literally trillions and trillions of dollars in a vain attempt to halt the bear market. It hasn’t worked and it’s not going to work. All its done is make our problems much worse than they had to be. Ultimately the secular bear market will not end until stocks become cheap. The longer we fight that process the worse it’s going to be in the end.

But back to the manipulation theme. Just as an example back in the spring of last year the Fed openly stated their intent to artificially hold interest rates down. They were determined to print as much money as needed to support the bond market and consequently drive rates down (interest rates move inversely to bond price). Let me show you what they accomplished. 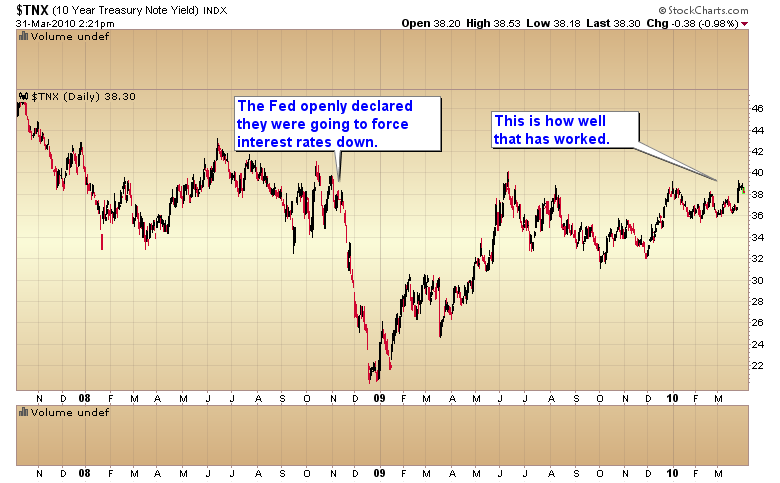 What they accomplished was to put in a final top in the almost 30 year bull market in bonds.
Let me show you another one. In Sept of 08 the SEC in its infinite wisdom decided to ban short selling in financial stocks. The end result? Financials dropped much farther than they would have naturally. 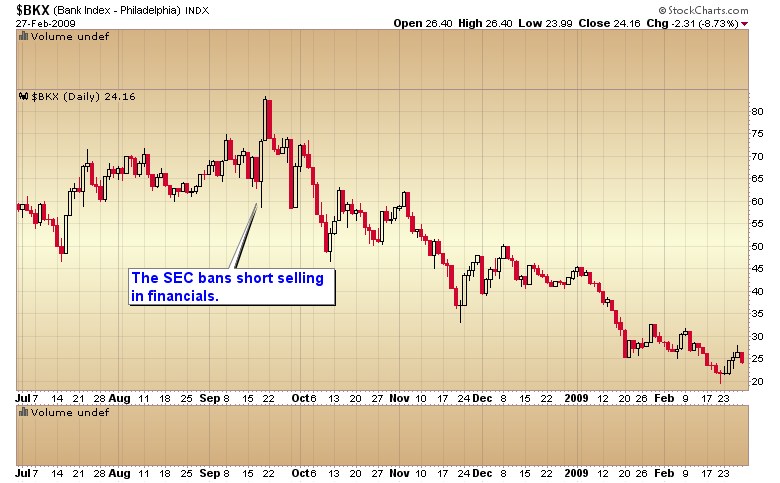 Folks let me tell you right here and now whenever you see or hear about the government managing any financial asset run, don’t walk, to take the opposite side of that trade.
Now the big stink is that gold is being manipulated. For our sake I hope so. It will mean that gold will go up much much further than it would all on its own.
If one is interested in the topic they kind find innumerable articles, interviews, papers and speculation purported to “prove” the fact at the GATA website. A website basically dedicated to exposing said manipulation. I guess it’s no surprise they have a mountain of “evidence”.
But let me just throw out one warning. This is one of the oldest tricks in the book. As long as one can lay the blame for any mistakes on some mysterious manipulators they never have to take responsibility for any bad calls. Hey it’s not our fault gold didn’t go to $1300 like we said the government is suppressing gold.
Fact is any manipulation to depress price below the natural level of the market will only increase demand. Let’s face it no one controls demand. Any attempt to force price lower than where it should fall normally will just bring in more demand from China, India, Europe, investors, etc.
If the governement is actually trying to control the price of gold it just means gold will go much higher than it would normally . We can only hope there is manipulation going on as it probably means gold will go to $10,000 instead of $5000.

75 thoughts on “MANIPULATION? LET’S HOPE SO”