The stock market is really nothing more than a gauge of human emotions. And just like bodies in motion, human emotions also follow the laws of action and reaction.

We’ve had a ring side seat to this as we are witnessing one of the most aggressive bull markets in history unfold after the second worst bear market ever.

Lately we are seeing this play out on a smaller scale in the intermediate swings. After the powerful initial thrust out of the `09 bottom and the final spurt into the second leg top we witnessed a rapid correction of 9%. During that correction sentiment again quickly reached excessively bearish levels. The general consensus was a second deflationary spiral was upon us. 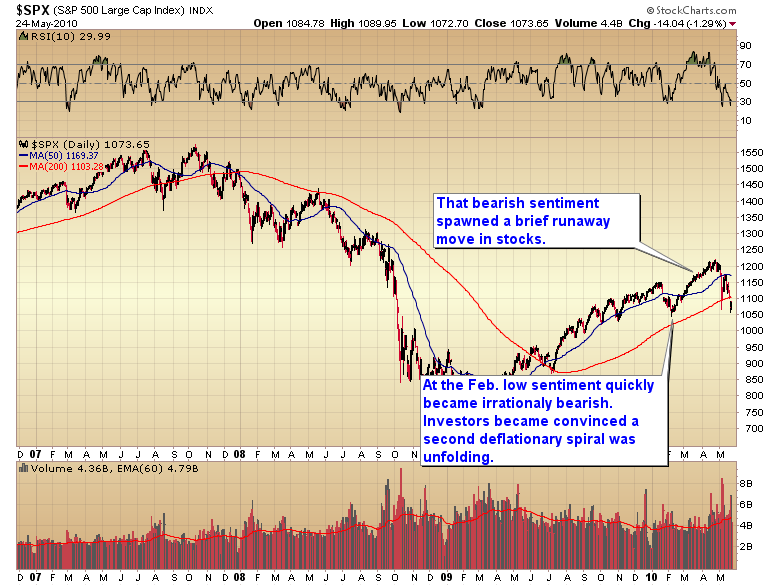 It was of course just a brief profit taking event like I said it would be. But that’s beside the point. More importantly the severe bearish sentiment generated a powerful runaway move out of the February bottom.

That extreme move in turn swung sentiment to levels of optimism in line with what we saw at the `07 top.

Now the law of action and reaction has again taken the market to the opposite extreme. Those extreme bullish sentiment levels generated during the runaway move have now produced one hell of a hang-over complete with a mini-crash.

So here we are again. Human emotions have now run to bearish extremes similar to, and in some cases even worse than what we saw at the `09 bottom.

If this is only a correction in an ongoing cyclical bull market then we have now built a massive negative sentiment base from which to launch the next explosive move higher in the ongoing war of action and reaction.