History says we should test the lows at some point in the next few weeks. The fact that we ended well off the lows does muddy the picture at bit, as most “crash” days have ended at or close to the lows of the day. So perhaps this time will be different.

I’m going to point to an interesting parallel that I’ve been watching. 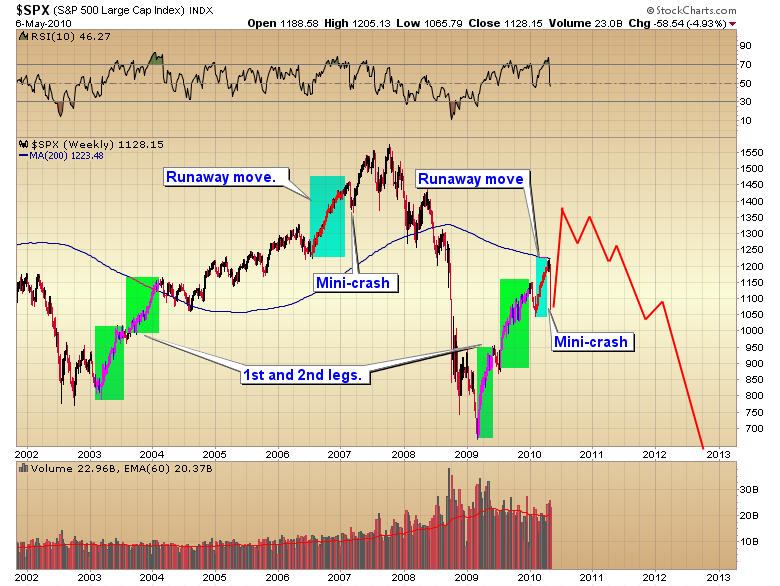 I’ve noted that the first and second leg of this bull roughly followed the same pattern as the 03-07 market. The correction following the second leg copied the 04 correction if not in duration in magnitude.
I’ve speculated that this bull would bypass the middle phase of a “normal” bull and move straight into the final phase.
In 06 the final phase began with a 7 month runaway move. We certainly saw a runaway move out of the February 5th bottom. I must admit I thought it would last a bit longer than 2 1/2 months but I guess we shouldn’t be surprised as everything has been unfolding much faster during this bull.
In 07 the runaway move ended with the mini-crash in February. Yesterday certainly qualifies as a mini-crash. So we are still following the 03-07 template. If the pattern holds then we should expect a recovery soon and a final surge higher into an ending blow off top.
From there we should roll over into the next leg down in the secular bear market.
Not that I want to buy into a secular bear market, but sometime in the next couple of weeks we should get a intermediate buying opportunity…unless this time is different and we just continue higher from here.