We continue to hear pundits describe gold as a bubble. Certainly it will turn into a bubble before this is all over but we are hardly in the bubble stage yet. In order for a bubble to form you need the public to come into an asset class. The public is pretty dim and it can take 15-20 years before they “catch on”. It took 18 before they noticed the tech bubble.
Once they do start to “get it” we will have about a year to a year and a half as gold enters the parabolic stage before the bubble pops. See the Nasdaq chart below from late 98 to March of 2000.

At gold’s top, half of your neighbors will be buying gold (not selling like they are doing now).

At the top there will be lines outside the the local coin dealer waiting for the next shipment of gold to come in.

At the top 7 of 10 billboards you see driving down the highway will have something to do with precious metals.

At the top the guy standing next to you in the grocery store will tell you how many thousands of dollars he made last month off his gold coins.

At the top everyone will have become convinced the dollar is toilet paper and will only continue to decline until it has become worthless.
At the top the population will believe that we have to go back on a gold standard.  By the way, a gold standard never stopped any country from debasing its currency. In ancient Rome they clipped some of the gold out of the coins. Roosevelt confiscated and arbitrarily revalued gold in the 30’s. A gold standard will not prevent a government from trying to get something for nothing by debasing the currency.
At the top stocks will be universally hated and gold universally loved. In reality, stocks will at that time, represent true value. Much more so than a shiny metal with virtually no industrial uses.


At the top smart money will eventually come to their senses and realize that true value (profitable companies making the necessities for life on Earth) are being given away for pennies on the dollar to purchase a shiny metal that really has no intrinsic value.

Here is a chart of the Nasdaq followed by a chart of gold. You tell me, does gold look like a bubble yet? 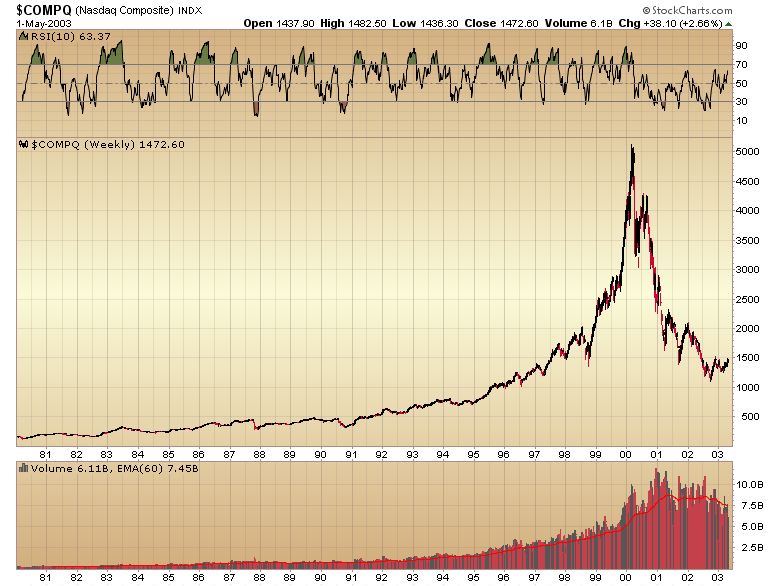 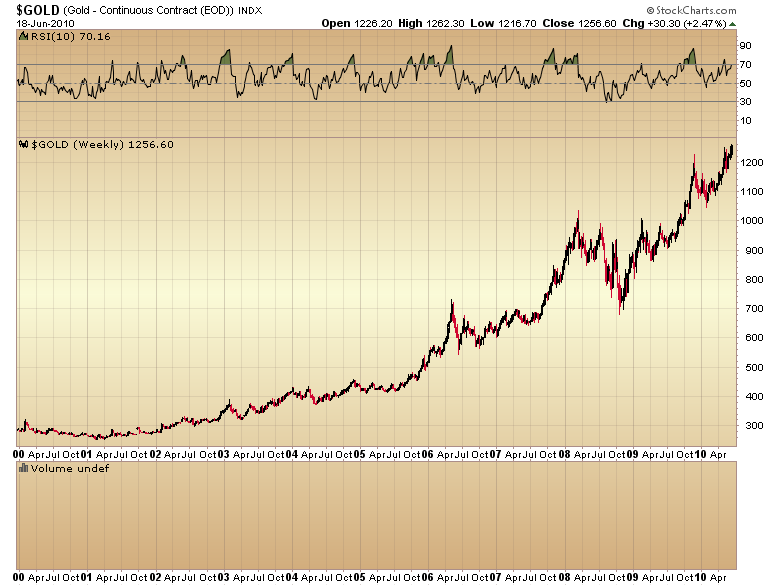 Of course not!
I think we might be getting close to the Nasdaq 1998 level, but gold is hardly in the runaway parabolic stage where it rallies over 100% in a year. Not to mention that none of the other signs I noted above are even remotely present yet.
But no one needs to worry about a bubble just yet.  We need to have at least one more serious correction similar to what happened in `08 or in tech stocks in 1998 to wash out bullish sentiment before we can start the final parabolic run into a true bubble top.
If I had to guess I would say that will occur during the next liquidation event which should be due in mid to late 2012 as the stock market collapses down into the third leg of the secular bear market. 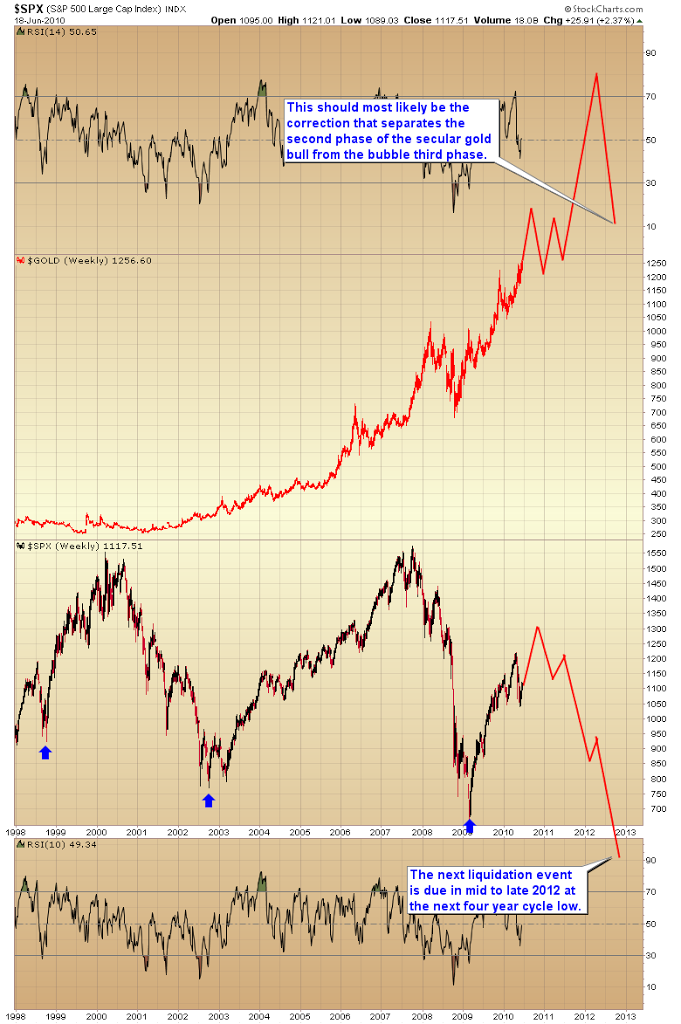 That should mark the next four year cycle low and possibly the nominal bottom for the secular bear market in stocks that began in March of 2000. I expect the selling pressure at that climactic event will also drag gold down into the correction that should separate the second phase (what gold has been in since early ’06) from the third and final bubble stage. Gold will quickly recover, like it did from the last selling climax, and when it does this is when we will see the public begin to panic into gold.
Then and only then can we start talking about a bubble.
At the moment I think we are about to enter the second leg of an ongoing C-wave advance that began in September of last year. I’m expecting this leg to take gold to the $1400-$1500 level before experiencing a major D-wave correction.
I’ll be monitoring the advance on a daily basis to keep subscribers appraised of where gold is in its intermediate cycle. When I think we are getting close to the top of the C-wave I’ll warn subscribers to take profits and exit the precious metals market so as not to get caught in a D-wave correction.

38 thoughts on “GOLD BUBBLE? WHAT BUBBLE?”