Now that gold is holding consistently above $1000 it’s going to become tougher and tougher for gold to shed riders, which is mandatory if the bull is to continue higher. That means the bull is going to have to pull out every trick in the book in order to get investors to jump ship. The greatest trick the gold bull pulls isn’t the D-wave decline (although that is a doozie). No, the greatest trick the bull pulls on investors is the boredom paradox. Basically this rule says that before any big leg up gold will wander around long enough that everyone becomes so bored they finally give up and jump ship. The paradox is that usually during this period gold is trending higher.

Let me show you some examples of the boredom paradox in action. 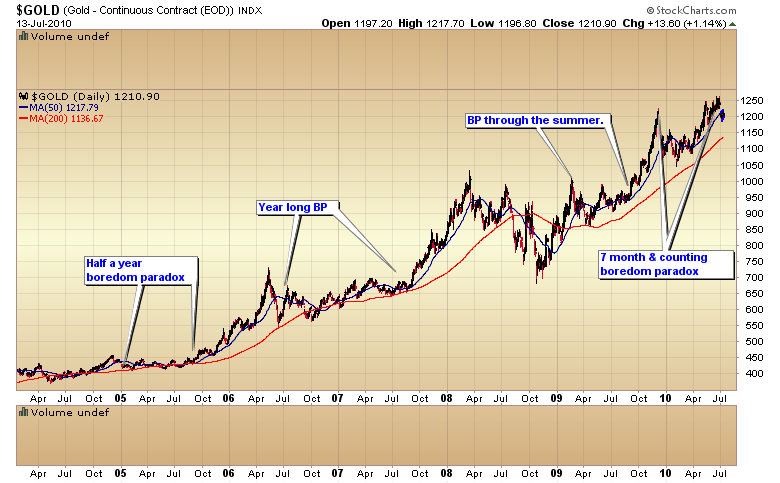 You can see these things often occur during the summer months. Ultimately they are consolidation patterns after large legs up. We have been in a tedious BP since last December. And even though gold has shown enough strength to actually break out to new highs (the paradox) it is still shedding riders at a vicious clip. I know I’ve seen it in progress. During the run up in November last year riders hopped on the bull in droves. My guess is that probably less than 10% of them have had the stamina to hang on, even though gold has made new highs.
Once gold has shaken off virtually every impatient rider then the next leg up will begin. Trust me none of those lost riders will be able to pull the trigger when it happens and the bull, when he starts charging, will instantly leave them behind. Invariably traders buy when the pain of missing the move just becomes too great to endure any longer and that of course ends up as either a short term top or an intermediate term top like we saw last November. Then of course the correction comes and all those Johnny come latelies end up getting knocked out for a loss. Like I said the bull is going to pull out every trick in the book.
Now I know many of you are just chomping at the bit, hardly able to wait for the big parabolic move that will top this monster C-wave. You want it and you want it now. Well I think I can tell you without a doubt you aren’t going to get it any time soon. Even if this is the bottom of the intermediate cycle I can virtually guarantee that gold is going to make you suffer through the rest of the summer. C-waves just don’t top out in the middle of summer. They top either in late fall or early spring. (They also top at the end of intermediate cycles and this one is just beginning.) What we can probably expect is a frustrating grind higher. Each marginal new high followed by another move into a daily cycle bottom. In the mean time some other sector will get hot, maybe it will be tech or energy or whatever. But there will be extreme temptation to jump ship, of that I’m positive.
I’ve seen this for 9 years now. Investors get frustrated and lose their position and about that time gold and miners will start to rally. It won’t be noticeable at first. As a matter of fact by the time you notice it gold will be overbought. And you know you won’t be able to make yourself buy into overbought levels, so you will sit on the sidelines waiting for a correction. Some of you will manage to hang on until the correction comes, most won’t. They will panic in at a short term top. It never fails. Like I said, I’ve seen it for 9 years now.
Of those that managed to wait for the correction probably less than 50% will be able to buy because as we all know by now, this is a volatile sector. Corrections are scaring looking. It’s tough to buy into them. I have to laugh when I see these comments about how a trader is going to back up the truck if we get a correction. Did any of us see any backing up of the truck at the February low or during the recent correction? No of course not, because bottoms never look like bottoms. They always look like the trend will continue. So the vast majority of truck backers never load the truck.
The only way to avoid getting taken out by the Boredom Paradox is to just hang on. As long as you make up your mind that nothing the damn bull does is going to buck you off no matter what tricks he pulls then you will be there when the charge starts. Trust me on this one, all the pain and frustration will be worth it if you can last long enough to make it to that final parabolic move. I don’t doubt for a second that we will eventually see miners break out above that 519 resistance and when they finally do they are going to go a long long ways. I will be totally flabbergasted if we don’t see the HUI above 750, maybe even above 1000 during this final C-wave. But you are never going to get there if you let the BP knock you off the bull.