The better than expected GDP numbers threw a slight monkey wrench in the trading plan (for you traders out there). I was expecting a gap down open that would break through the 1040 pivot. The plan was to buy into that gap with a stop under the morning intraday low. The market did break slightly below 1040 (1039.70) so in theory if one was quick they could have jumped in right there. I doubt anyone was that quick, so I suspect almost no one caught the exact low. Perfect timing isn’t critical though if this is a daily cycle bottom, as we should have at least 2 to 3 weeks of upside ahead of us. I’m assuming the market doesn’t drop back down to test the lows on next Fridays jobs report.

I really doubt it will. I think the jobs report has probably lost its ability to move the market at this point. Until we start to roll over into the next recession we are probably going to continue to see mildly positive jobs numbers for now. When we start seeing 200,000 and 300,000 jobs being lost again then we can look for the monthly jobs report to start affecting the stock market. Until then I think it’s not going to have much effect on stocks. With that in mind I really doubt the market will be coming back down next week in order to bottom on the employment data.

Now before everyone gets all excited let me point out that today was in fact an outside day and as such we don’t officially have a swing low yet. We can’t have a daily cycle bottom until the market forms a swing low. That being said, today was a 90% up volume day. That is a panic buying day and this late in a daily cycle that usually means smart money has recognized a bottom and is rushing to get back in the market. 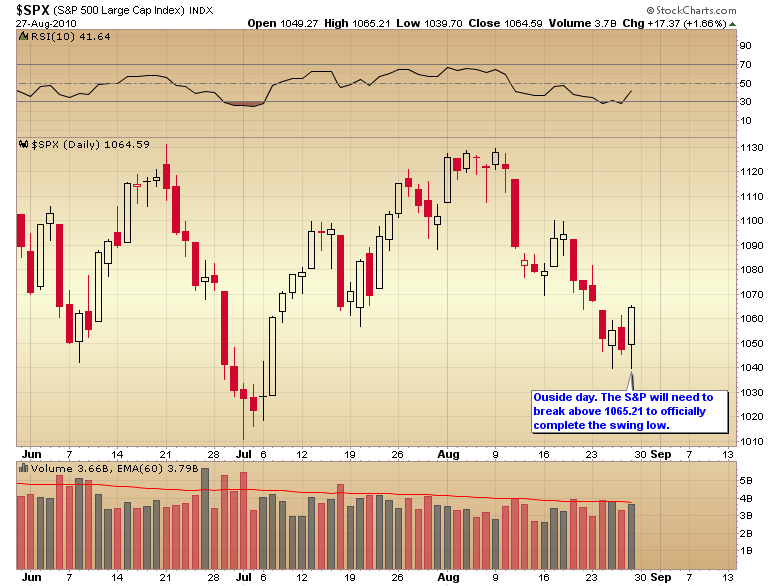 I realize almost everyone is now convinced the bull is dead and we’ve started back down in the next leg of the secular bear market. Now maybe we have and maybe we haven’t. I’m reserving judgment until I see the last two of my bear market signs come to pass. Namely the 200 day moving average has to turn down and we must get a Dow theory sell signal (BOTH the industrials and transports must close below the July lows). Neither one of those things has happened yet. Until they do we are in no man’s land. As a matter of fact, according to strict Dow Theory the primary trend is assumed to still be in force until a sell signal is given. Since we obviously don’t have that, and aren’t really even very close to it yet, I’m going to abide by the rules and assume the cyclical bull is still alive.

Next I’m going to point out we don’t even have a confirmed down trend yet. So far the market is still making higher highs and higher lows. That is the definition of an uptrend. In order to reverse that the market would have to break below the July low or it will have to bounce out of this daily cycle bottom, stall out, and then move back below Friday’s low (I’m taking some liberties here and assuming Friday did in fact mark the cycle bottom.) 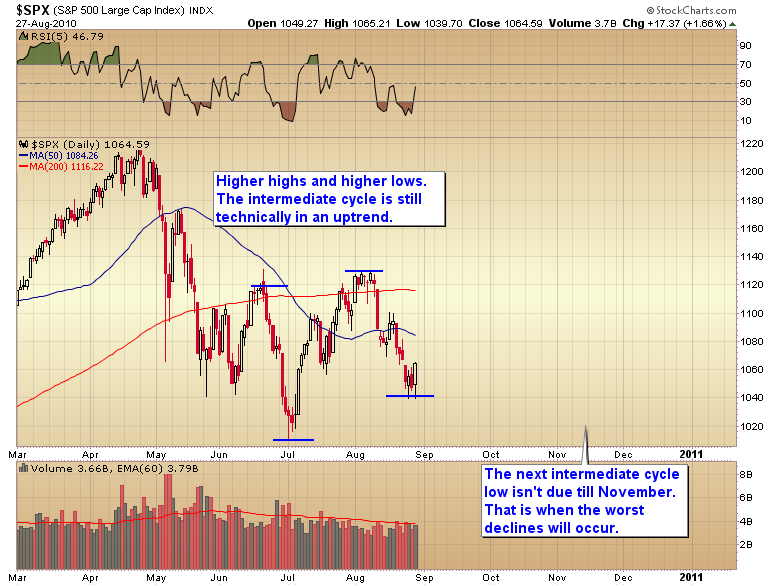 Now let me show you what no one is seeing. And when no one sees it that makes it all the more likely to play out. Of course we do still have the inverse head and shoulders pattern in play. That one actually has been spotted by a few hopeful bulls, but it’s certainly not mainstream yet like the regular head and shoulders top was and still is.

The real pattern, and one I put a lot more faith in than a head and shoulders top or bottom is the 1-2-3 reversal that is in play. 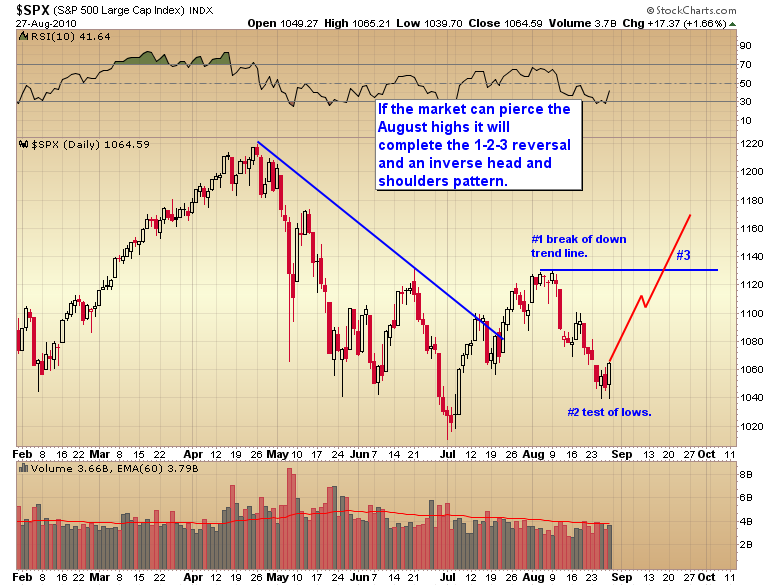 Notice how the initial rally into the August top broke the down trend line. That was #1. Now we are in the process of #2 testing the lows. As long as today’s bottom holds that test is going to be successful. The final piece in the puzzle is a move above the August highs. If that occurs we will have a confirmed trend reversal and the April highs will then be in jeopardy of being surpassed. I know that seems impossible at this point but I would point out that everyone assumed we were back in a bear market in mid `04 also. The market had been making lower highs and lower lows since March. Needless to say everyone was a bit surprised when the Fed cranked up the printing presses into the elections and the market broke out to new highs. I forget, what is happening this year? Oh that’s right, mid-term elections. Hmm…

There is also a yearly and 3 year cycle low coming due in the dollar (more on that in the dollar section of the report). Suffice it to say there will be plenty of liquidity the next several months.

More in the weekend report for subscribers…