Trying to pick a bottom in the gold correction at this point is probably a low probability strategy. The simple fact is that until gold forms a swing low there is no possibility of a bottom. So someone trying to jump in front of the correction might as well wait at least until a swing forms.

Ultimately though we need the value investors to step in to the gold market. Of course its tough to guess ahead of time at exactly what level we are going to get enough value money come into the sector to halt the correction.

I do have a couple of ideas of where that’s likely to happen, being somewhat of a value investor myself.

The first level that should start to bring in big money is the psychological $1300 level. That level may or may not bring in enough money to halt the decline. We will only know after the fact of course. But if one wanted to try and pick a bottom that would be the first level to make an initial purchase.

A much safer bet in my opinion would be if gold can correct  enough to test the $1265 breakout level. I expect enough value money will enter the gold market at that level that it’s unlikely gold will decline significantly below that point. 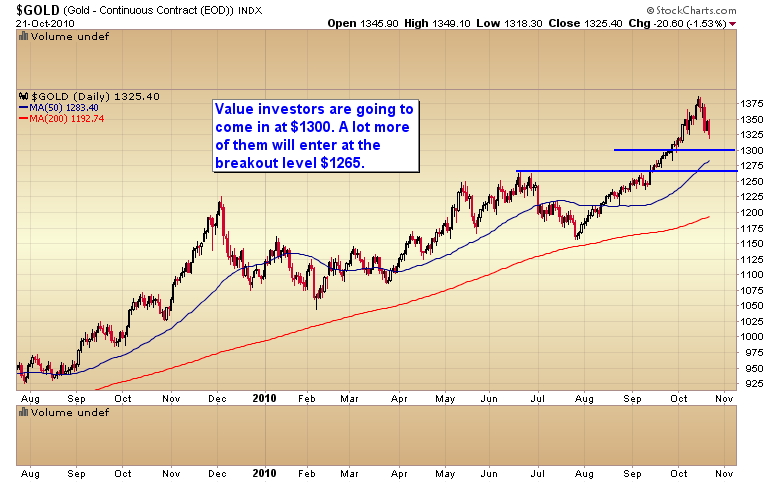 We have a bit of a dilemma right now. Similar to what happened back in January. Gold has begun to correct but the stock market is still resisting. As soon as the stock market rolls over into it’s daily or intermediate cycle decline it’s going to put added pressure on the gold correction. So trying to prematurely jump into the gold market here is risky (in so much as one will probably experience a drawdown. Of course being a bull market any timing error will eventually be corrected).

In a perfect world the dollar rally will strengthen and test 80 and in the process force the stock market to correct and gold to drop down to test the $1265 breakout. That’s the point where I would advise investors to step back into the market heavily. I expect you will have a lot of company at that point and your chances of a significant drawdown will be drastically reduced.