It has been my contention all along that the Fed would print until something breaks. Once that break occurs we will enter the next leg down in the secular bear market. This time I don’t expect it to be the credit markets, although we will almost certainly have trouble in the municipal and state bond markets. Some may even default.

I actually think the greater risk is from massive layoffs by state and local governments in an effort to cut expenses and avoid default. When that begins we will see unemployment levels start to spike again.

The real danger is going to come from inflationary pressures unleashed by the Fed’s QE programs. We are already starting to see severe inflationary pressures in food and energy and it’s already causing social unrest in many third world countries. Expect this to continue and intensify as we move into the summer months.

Besides starting an inflationary spiral QE is also stretching the stock market cycles.

To explain; The `09 yearly cycle low occurred in March. The 2010 yearly cycle low should have arrived in the early spring roughly 12 months after the March `09 bottom. We did have a decent correction in early February. That should have marked the yearly cycle low. However, because of QE1 that cycle stretched into July, and was more severe that it should have been absent Fed meddling. We even witnessed another mini-crash. A direct result of the extreme complacency generated by the QE driven rally in March and April.

Under normal conditions the cycles would adjust and we would get a shortened cycle this year that should have bottomed right about now. Obviously that isn’t going to happen since we don’t even have a top yet.

It’s now clear that QE2 is going to stretch this cycle also. I now look for the next intermediate bottom to arrive this summer sometime around July (roughly 12 months after the 2010 bottom).

This should correspond with the violent rally as the dollar blasts out of the three year cycle low. 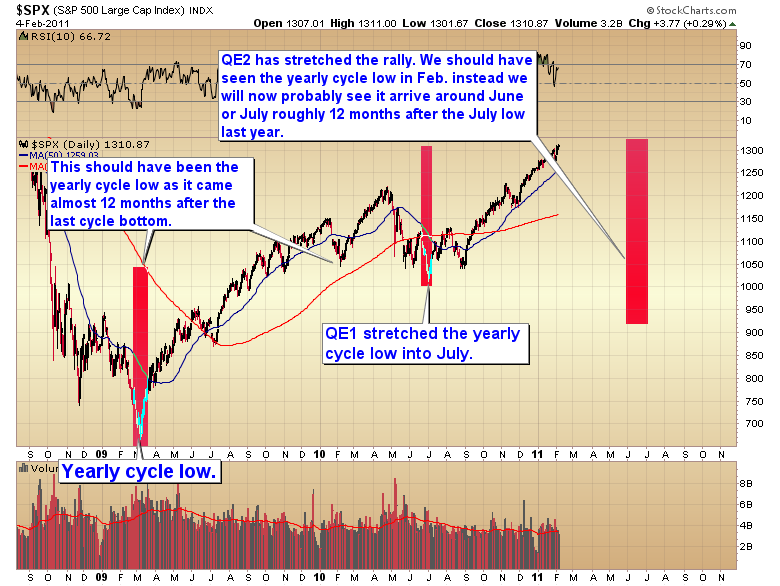 This should mark the beginning of the next leg down in the secular bear market. Confirmation will come if the correction is severe enough to test the July 2010 lows. In a healthy bull market each intermediate correction should bottom well above the prior low (higher highs and higher lows). A move down to the 1050-1000 level will be a clear sign the bull is in trouble.

We should also see the dollar rally out of the three year cycle low force the CRB down into it’s 3 year cycle low (actually the cycle runs about 2 1/2 years on average). 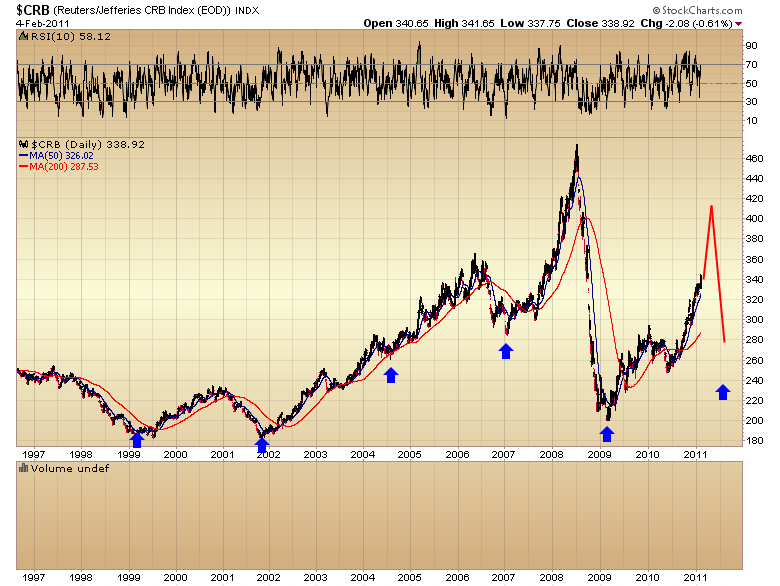 And gold down into a severe D-wave correction. (We still have one more parabolic leg up before the D-wave starts.) 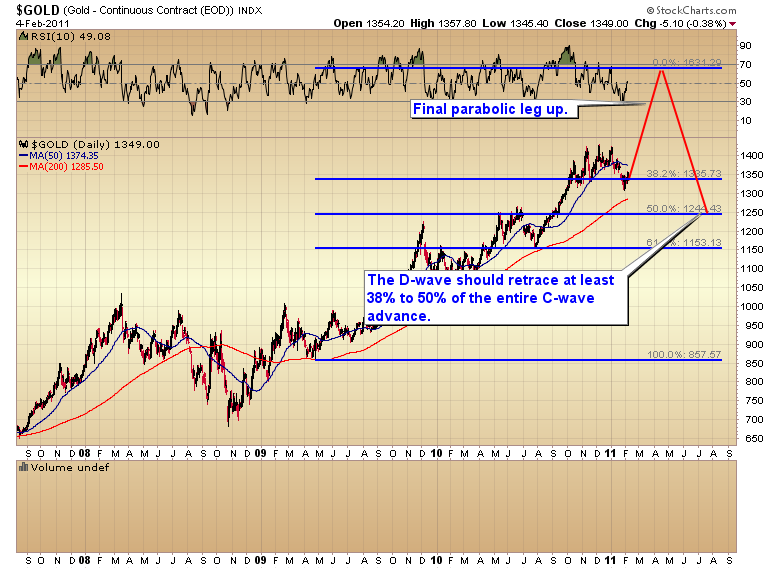 Even though I have been expecting the market to correct (into the normal yearly cycle timing band) I’ve been warning subscribers not to short the market because the dollar is dropping down into a major cycle low. There was always the possibility the dollar collapse would stretch the cycles and make selling short very risky.

The time to short will come once the dollar puts in the three year cycle low and all markets begin the move down into the timing band for the next yearly cycle low this summer.

I will be watching for signs the dollar cycle has bottomed sometime in April or even as late as early May. At that point one might consider looking for a sector, or sectors, that are extremely stretched above the mean to sell short. (Not precious metals though. I never short a bull market.)

Until that time its still too early to play the short side. The odds are better positioning for the final leg up in gold’s massive C-wave advance.