Make no mistake, the four-day rally we just saw was nothing more than short covering in front of the Fed meeting just in case Bernanke surprised us with QE3. As expected he confirmed that QE2 would end on schedule. The dollar rallied and the market sold off on the news.

Folks, I don’t think this is over yet. In the chart below you can see that every intermediate cycle low exhibits some kind of capitulation volume as market participants panic. 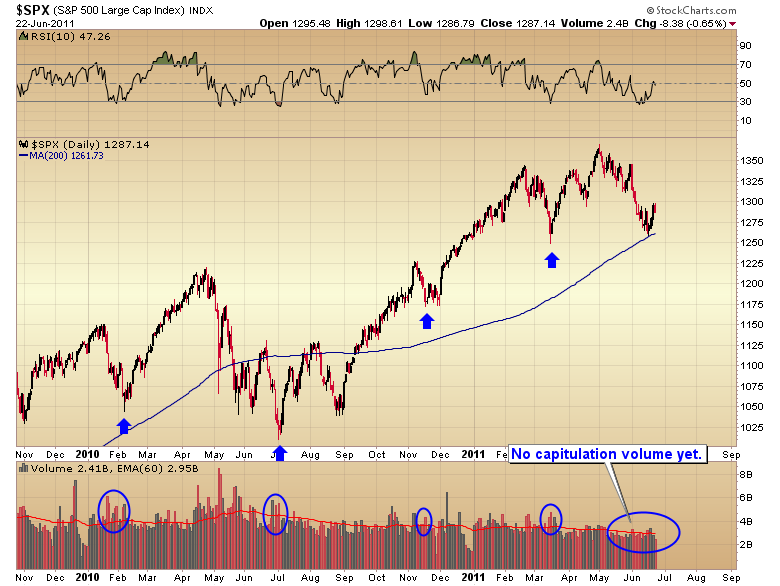 We clearly have not seen any kind of a panic selloff yet. As a matter of fact volume has been running slightly lower than average. This is not what happens at a true intermediate bottom.

The average duration of an intermediate cycle is between 20 and 25 weeks. Two of the last three intermediate cycles bottomed perfectly in that timing band. The March cycle was slightly shortened by the Japanese tsunami which generated tremendous bearish sentiment in a very short time. 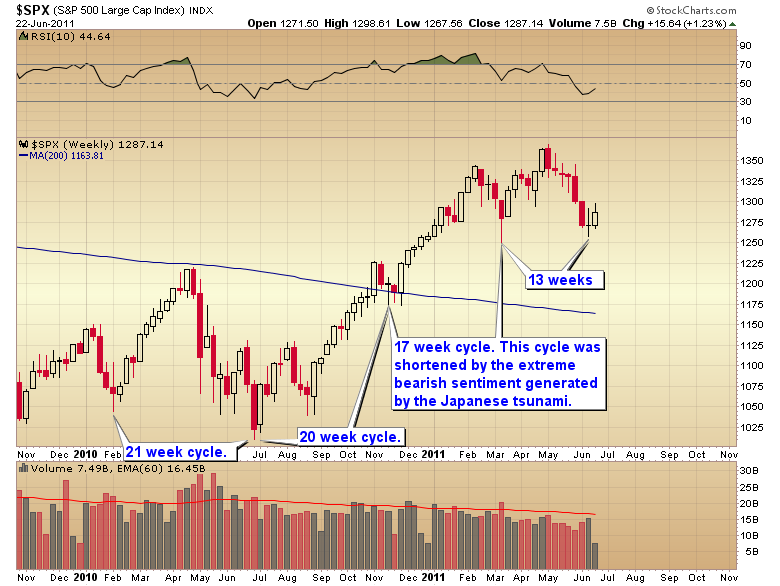 However there is no serious calamity that should shorten the current cycle. One could claim that the Greek situation is driving the decline, and once it gets resolved the correction will end. I think that’s highly unlikely. The market has known for over a year that Greece is going to default. There’s no surprise there. I suspect the next Black Swan will come in July as Spain, or Portugal, or Irish bond yields spike, or something completely out of the blue occurs, like an implosion of the Australian housing market. It’s in times of stress that flaws in the system break.

Since we don’t have any capitulation volume yet, and it’s still too early for the intermediate cycle to have bottomed, the assumption is that this correction isn’t finished.

So far the market is still following the template I laid out in “The Bear is Back” post. I expected some kind of counter trend rally to relieve the extreme bearish sentiment levels and oversold conditions. We are getting that rally now (it may have already ended).

Once the counter trend rally runs its course the market should have another leg down bottoming in late July to mid August. At that point I expect Bernanke to freak out and initiate QE3. That will be the signal for a more durable, and probably explosive rally.

But remember, the most violent rallies occur in bear markets!

468 thoughts on “DEFLATION IN OUR FUTURE”