I think next week will mark a major turning point in the gold market. Depending on whether the dollar continues higher or turns back down we will either see a resumption of the D-Wave decline or this will just turn into a normal run-of-the-mill intermediate degree correction followed by another leg up in this 2 1/2 year C-wave advance.

First the pros:
The COT report has now reached a maximum bullish level on the commercial contracts. In the past this has always marked major bottom turning points. 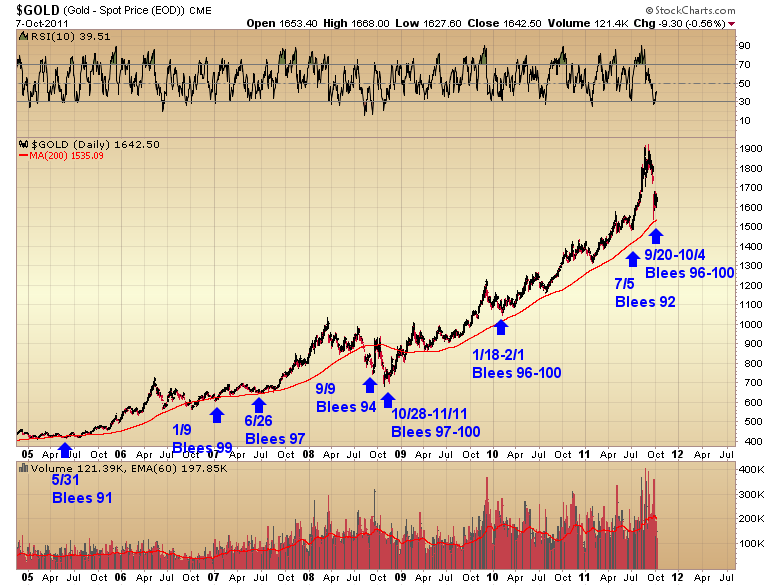 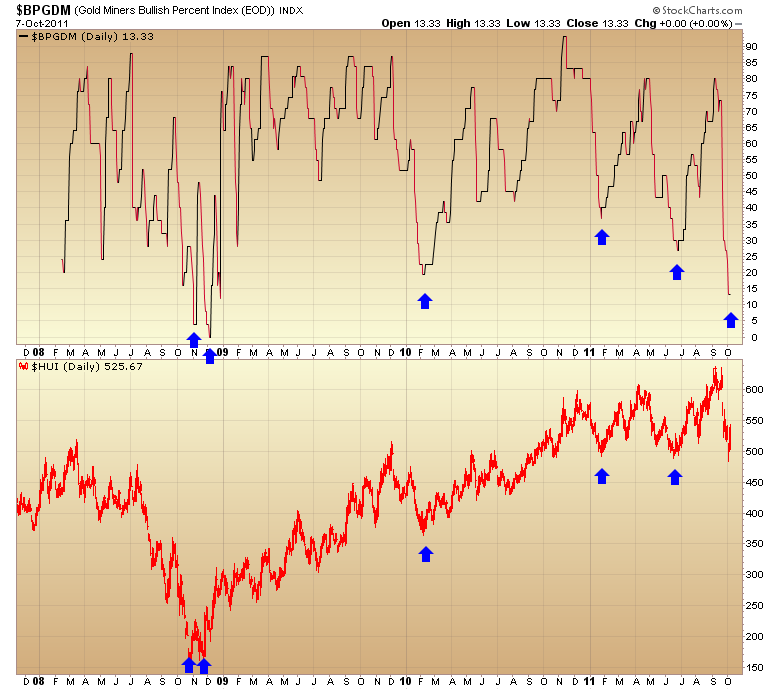 Chart courtesy of sentimentrader.com
It’s possible that gold has formed a small T-1 continuation pattern (A move followed by a sideways range often precedes another move of almost equal extent in the same direction as the original move. Generally, when the second move from the sideways range has run its course, a counter move approaching the sideways range may be expected.) 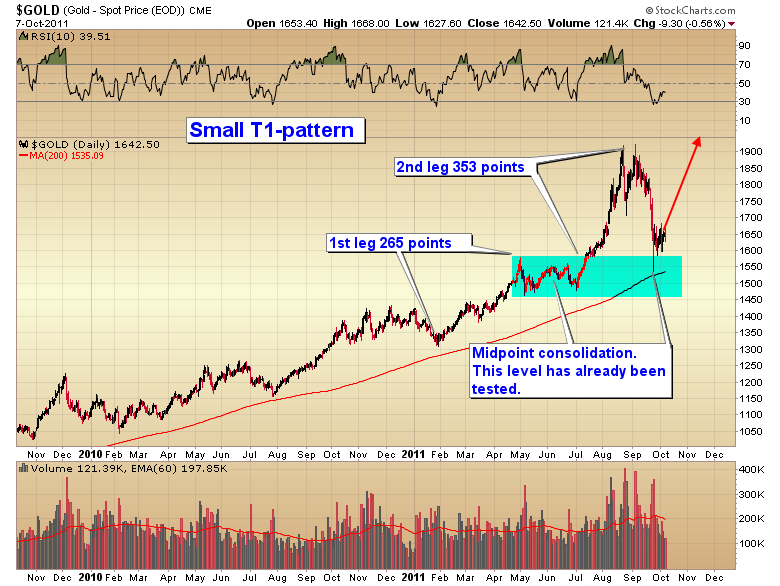 There is a small problem with this interpretation as the second leg of a T-1 pattern is generally slightly smaller than the first leg.
The cons:
The current intermediate cycle is too short. Barring a shortened cycle, which does occur rarely, there should be one more leg down into the normal timing band for an intermediate degree cycle bottom (20-25 weeks). 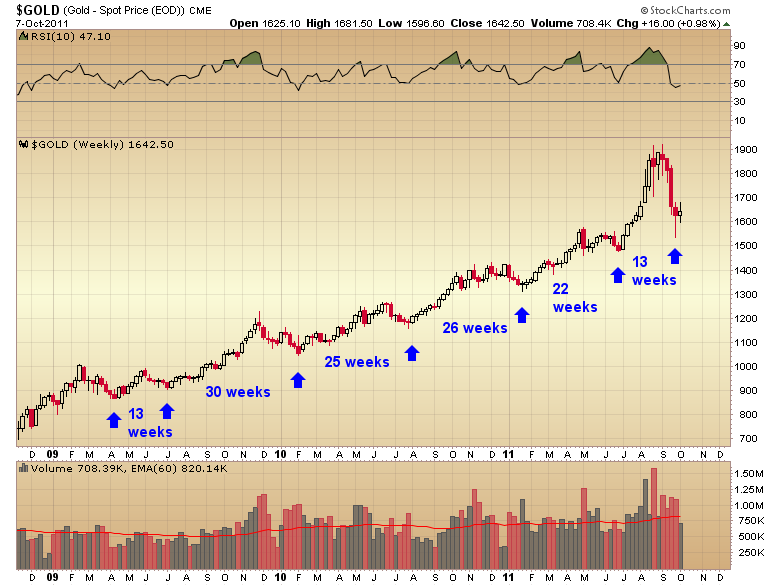 Also the HUI mining index is potentially forming a megaphone topping pattern. If gold does have one more move down into a true D-Wave bottom then the bounce off the lower trend line should fail followed by one more aggressive move lower. 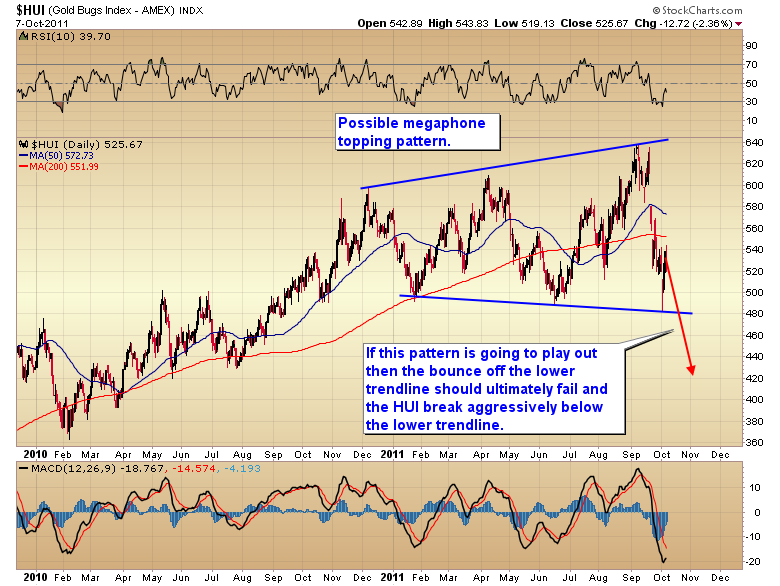 Also there is a much larger T-1 pattern in play that fits the normal parameters much better than the smaller version. 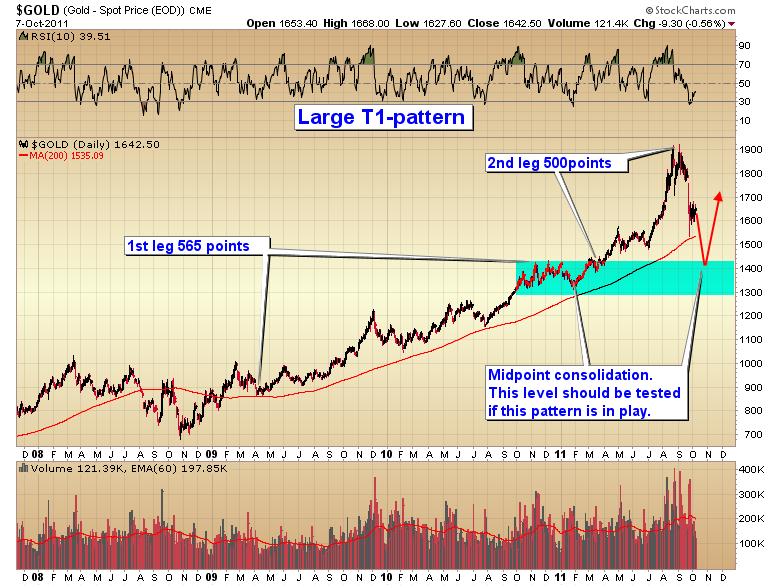 You can see from the chart above that unlike the smaller T-1 the larger version does feature a second leg slightly smaller than the first, and if this pattern is playing out then we need one more move lower to test the midpoint consolidation zone.
Right now the battle is being fought at the $1600 level. So far every time gold reaches that level buyers step in. 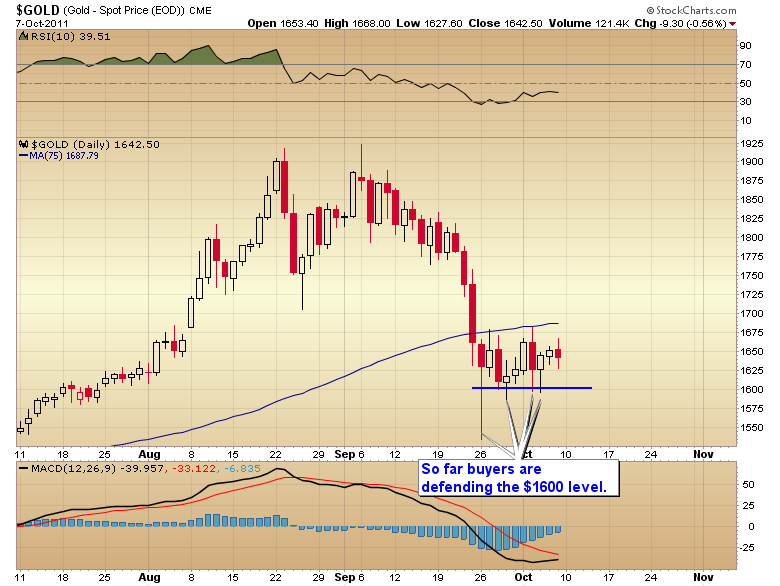 If however gold closes below $1600 that would be a serious warning sign that the current daily cycle will be left translated and that gold is indeed caught in a true D-Wave decline. If that’s the case it still needs to test the consolidation zone of the large T-1 pattern and the intermediate degree cycle will bottom in the normal timing band (November). If this scenario unfolds then we can look for an A-wave advance to begin once that final D-Wave bottom is in place.
As I have noted before A-waves usually test but fail to exceed the prior C wave top. They are almost always followed by a lengthy 1-1 1/2 year consolidation before the next leg up can begin. 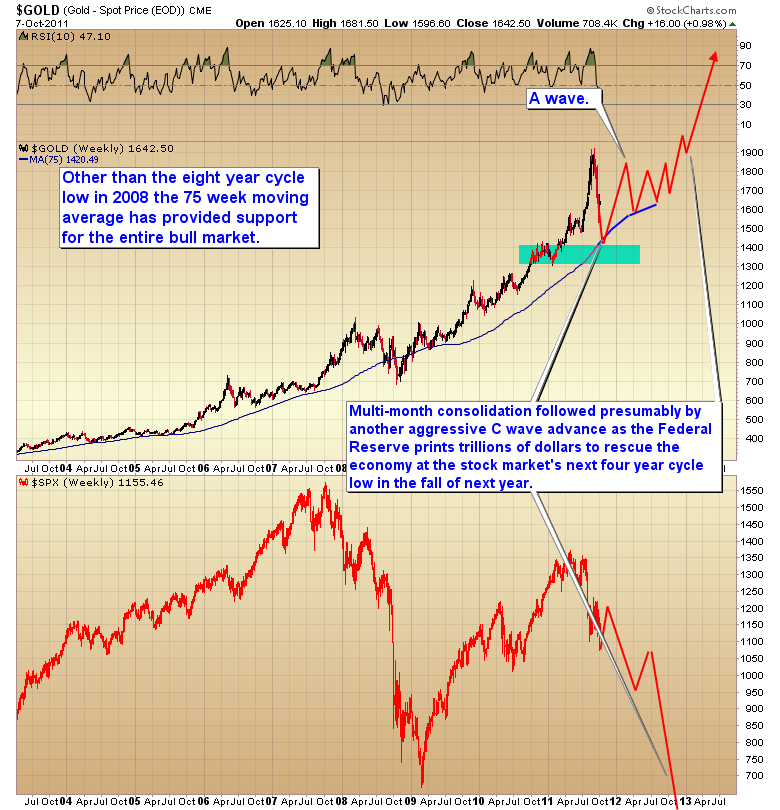 In my opinion next week is going to be critical. Either the current daily cycle is going to break down below $1600 in a left translated manner, in which case we will probably see gold continue sharply lower to test the 75 week moving average and the consolidation zone of the large T-1 pattern. Or if gold can gain some traction and breakout of the recent trading range to the upside then the smaller T-1 pattern comes in to play and we should see gold make another run at $2000.

154 thoughts on “GOLD AT A MAJOR CROSSROADS”