A few people have commented that they can’t post to the blog. Folks you will need to create a google account to be able to post to the comments.

After today I think it’s safe to assume that yesterday’s reversal was indeed a manufactured rally to allow Wall Street to hand off the bag on to technical dip buyers. The selling on strength number yesterday provided us with a very timely warning and prevented us from getting caught.

It’s sad that virtually all markets are rigged nowadays and we have to second guess which way the big banks are going to take the markets in order to make money.

Oh well since there’s nothing we can do about it, and there’s virtually no chance the government is going to crack down on the banking system, I guess we are stuck with this for the foreseeable future. Ever since the ban on short selling financials in 2008 it became glaringly clear that no effort would be spared, or laws ignored, to insure that the banks would be protected from now on.

In that vein of thought I have to think it won’t be long now before the Fed steps in to stop this sell off. Even in a natural market today’s heavy selling pressure would probably trigger some kind of snap back rally. On top of that there was a Bollinger band crash trade in the NDX. 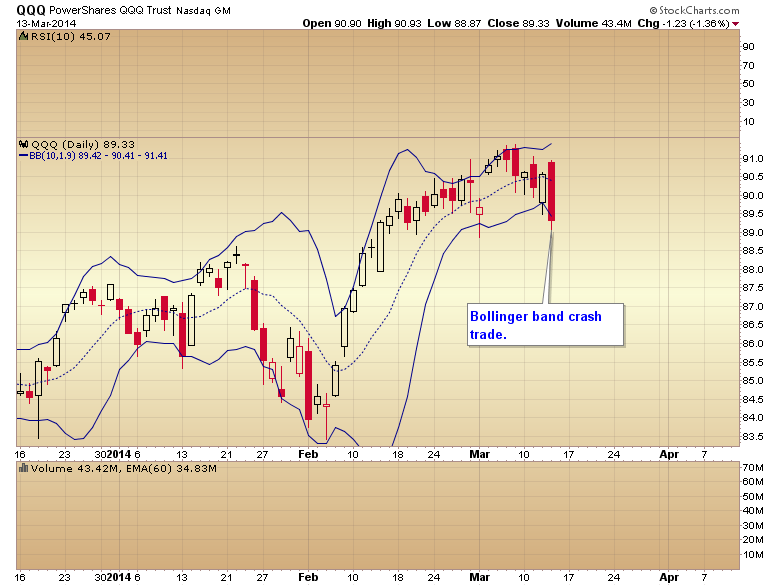 Let’s just say I won’t be at all surprised if all of today’s losses get reversed tomorrow. That being said I’m going to stay on the sidelines in the stock portfolio until stocks recover and make new highs. They also have to do it quickly. I wouldn’t be interested in buying if it takes stocks another two weeks to recover as that would be too late in the daily cycle to buy.

As a matter of fact at this point barring a complete reversal tomorrow I probably won’t be interested in re-entering positions for the stock portfolio until we enter the timing band for the next daily cycle low (DCL). That’s not due until the end of the month or first week in April. So we’re probably going to twiddle our thumbs for a while in regards to stocks, unless we get a complete reversal tomorrow.

Today the dollar dropped enough to test the Oct. bottom, and not surprisingly bounced. This is exactly what we were expecting, but again it’s too early for the DCL to be finished, so while we may rally for a day or two it’s unlikely the decline is done. 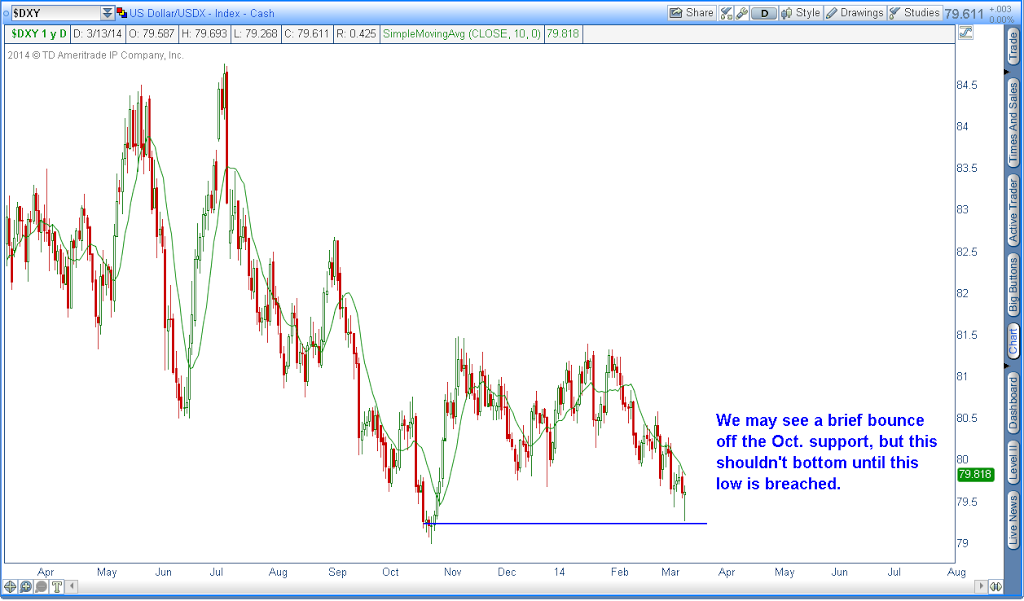 As expected the miners finally followed gold and have broken out of their 3 week consolidation. They did so with a big move, also as expected. I figured there would be a lot of buy stops right above $27 that once they triggered would produce a strong trend day. 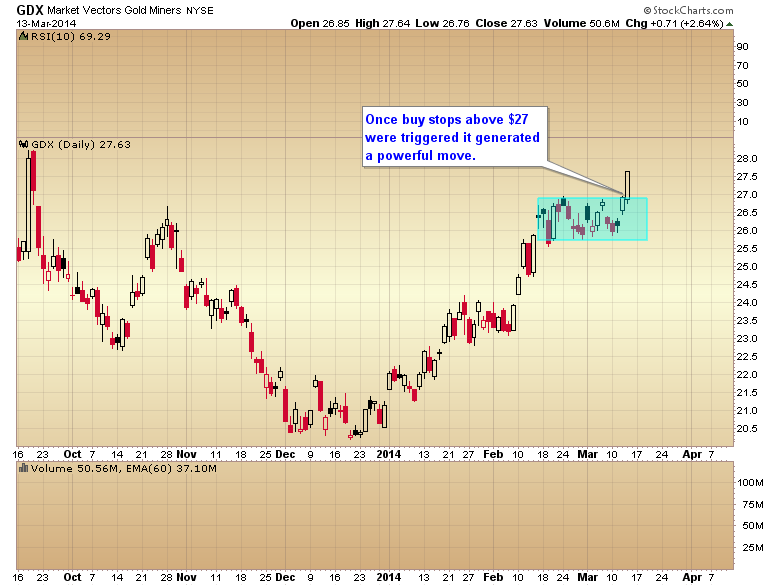 That being said the metals may now have to consolidate for a day or two. If the dollar bounces and stocks rebound we may see some short term profit taking in the metals after today’s big move. Both stocks and gold have generated powerful moves over the last two days and it wouldn’t be unreasonable to expect both trends to take a breather.

Another consideration is that gold is now bumping up against the notorious Sept. FOMC top. 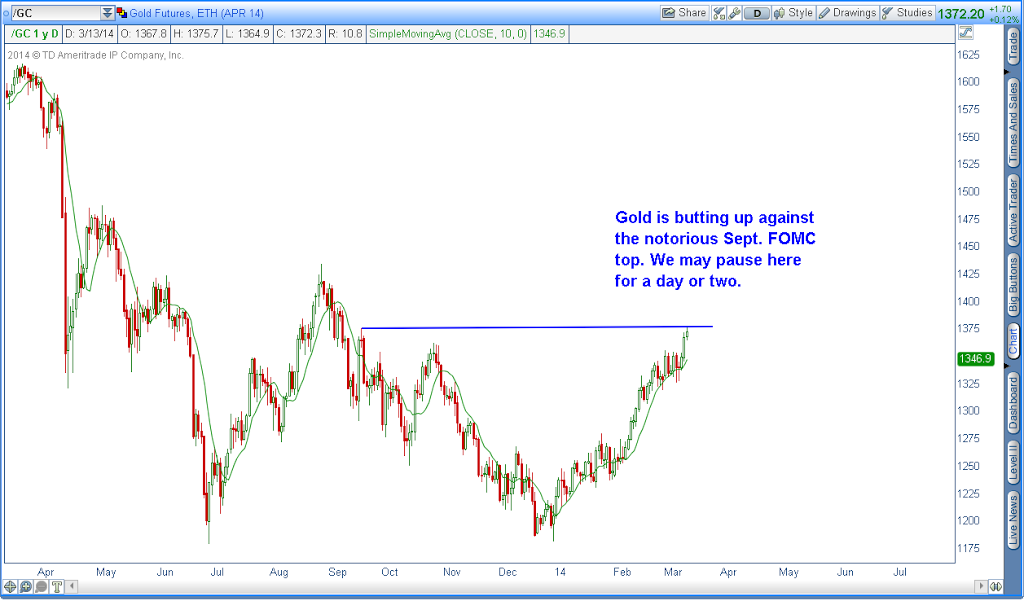 Ultimately I think gold is going to test $1425 and I suspect we will see another manufactured top with a marginal move above $1431 to get gold bugs excited and buying into the breakout the same as they did last Aug. 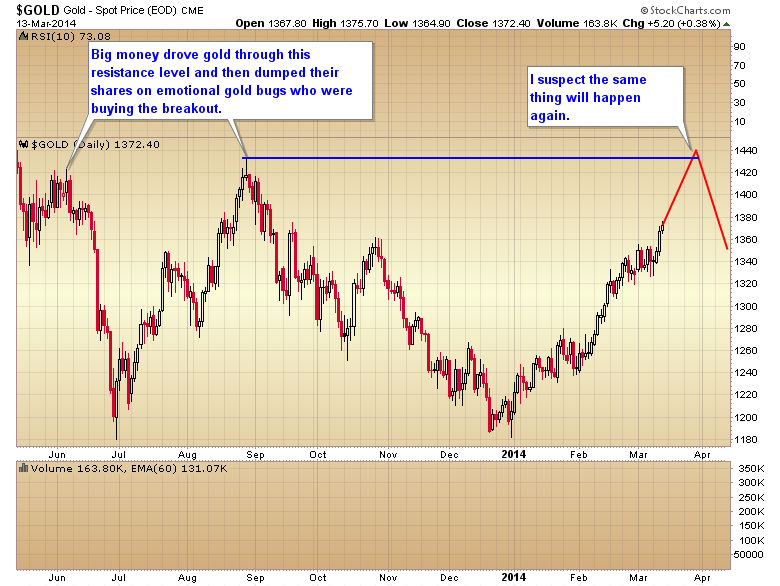 I’m not really expecting much of a pullback here, more just some sideways chop for a day or two before the trend continues higher. So I wouldn’t advise one to lose their positions to try to avoid one or two sideways days.