One of the hardest things to do in this business is to let your winners run. For whatever reason we are programmed to expect reversals. It’s why so many people try to trade against the trend. I’ve seen it in full display over the last 5 weeks as trader after trader has tried to pick the top of the run in metals. Many even trying to short the sector.

I made that mistake many times myself in my early career. Folks a sustained trend doesn’t come around all that often, when you get one you have to ride it for all it’s worth. That’s how the big money is made. And I’ll say this again. Never, never, never short a baby bull. They are unpredictable and extremely aggressive. They almost always go much further than anyone expects. Why? Because everyone has become conditioned for failure by the bear market that preceded it. This is the fuel for a much more sustained move than most people anticipate. Invariably there is a steady stream of top pickers all the way up. They either sell way too early, or they try to short the rally over and over as a revenge trade for missing the move.

Let me show you how far the baby bull went as we came out of the last 8 year cycle low. 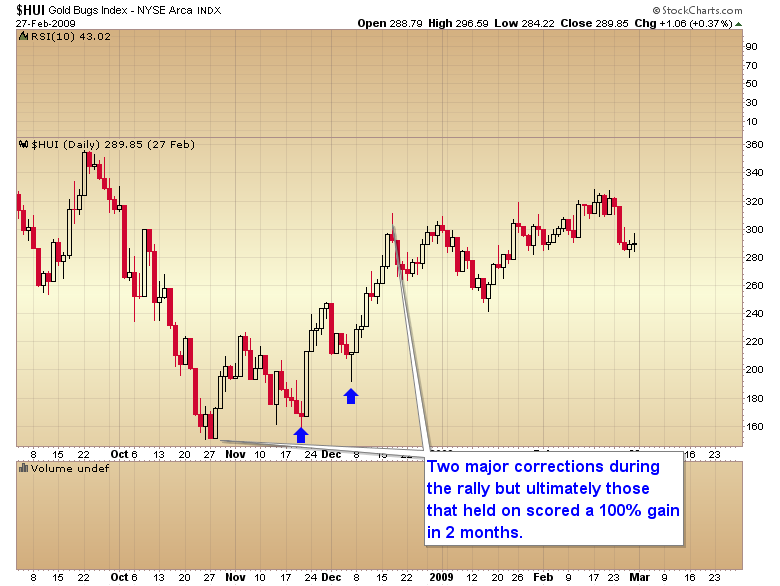 The current baby bull is showing all the signs of delivering something similar, yet I continue to see traders shorting gold, or shorting miners. Aren’t there enough trampled bodies in the wake of this bull already? Why do people keep repeating this mistake over and over? I guess this is why so few people make money in this business. The can’t, or won’t break their destructive trading habits.

Now we have a breakout from the pennant pattern. 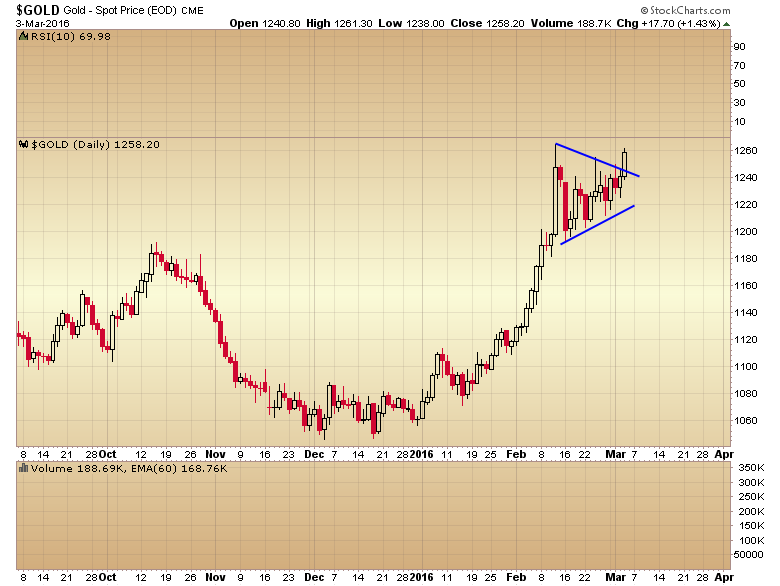 These are almost always a continuation pattern. When an asset rallies strongly and gets stretched far above the mean, it either needs to correct, or it needs to consolidate before the move can continue.

For whatever reason many traders assumed that the golden beach ball would be pushed back underwater. That clearly wasn’t going to happen. Like I’ve been saying, I don’t see any reason for the cartel to continue attacking gold. The Fed needs inflation at this point. They need gold to lead the commodity sector higher, especially oil. So I just don’t see the motivation to continue attacking the gold market. It’s time to start playing by different rules.

So at this point one of two things is going to happen.

One: The euro will rally for 5-8 days and then roll over into an intermediate degree decline. In this scenario gold will rally enough to test the 2015 high ($1308), or maybe marginally break it, and then start down into an ICL over the next 5-8 weeks. 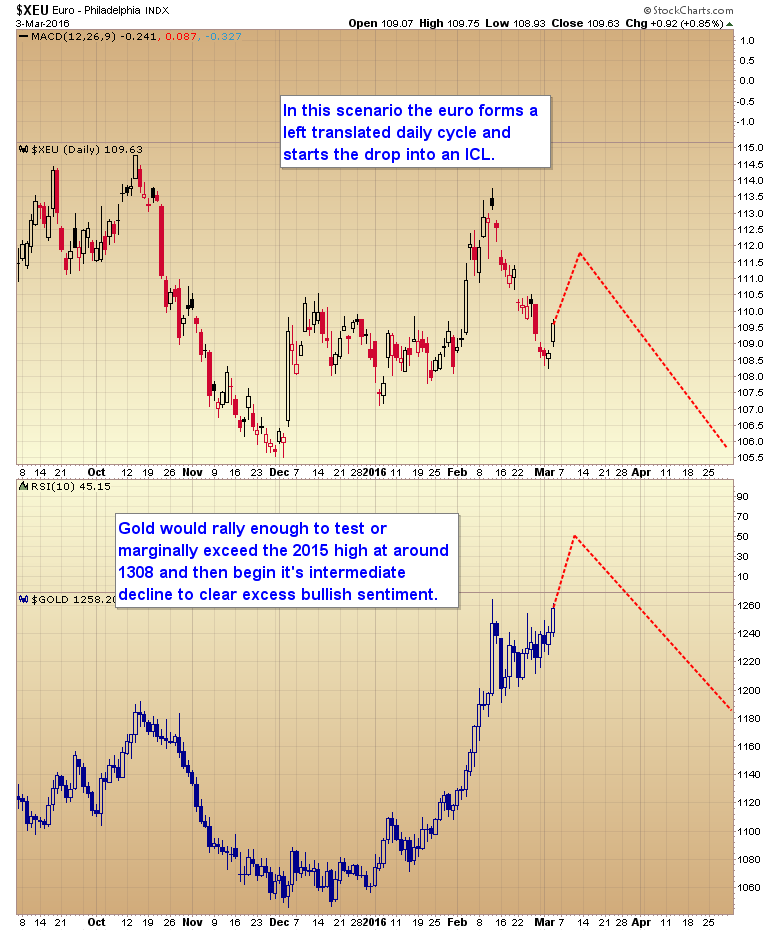 The other scenario, and the one no one is expecting, is for the euro to deliver another leg up in its intermediate cycle, and the dollar another leg down into a final ICL. In this scenario the pennant is a midpoint consolidation in a T1 pattern and gold is going much much higher than anyone currently anticipates. The T1 target zone is around $1400. 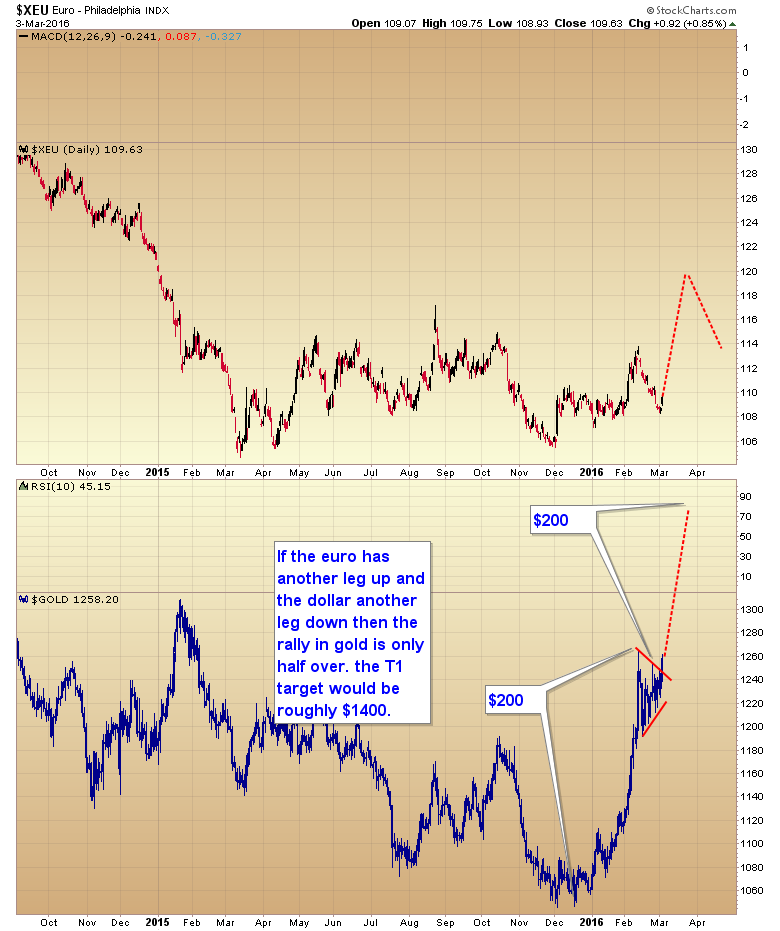 So it’s important to me to see how the euro rallies over the next 5-10 days. If it rallies hard and the oscillators take their time about getting overbought, the odds are good that we are moving into the second scenario. That would mean we want to hang on to our long positions until the dollar forms a bloodbath phase sometime around 25-30 days into its daily cycle. It’s only on day 13 right now.

81 thoughts on “THE HARDEST STRATEGY: LET YOUR WINNERS RUN”