I’m going to try something a little different today. I’m going to post two videos. One is a quick version with just the bare essentials to make my point. I’ll try to keep these videos around 5 mintues or less.

The second video will be longer and much more detailed for traders interested in a more indepth explanation.

This video examines the large consolidation that existed in gold before it blasted higher 90% into the 2011 top. Current consolidations with enormous future bullish implications include the Nasdaq and the energy sector.

Energy Stocks on the Cusp of a Breakout

Energy stocks are on the cusp of a breakout above a major resistance zone. It may tke another week or two to break through, but I think they will. Once they do, I think energy stocks will produce a big move this fall. 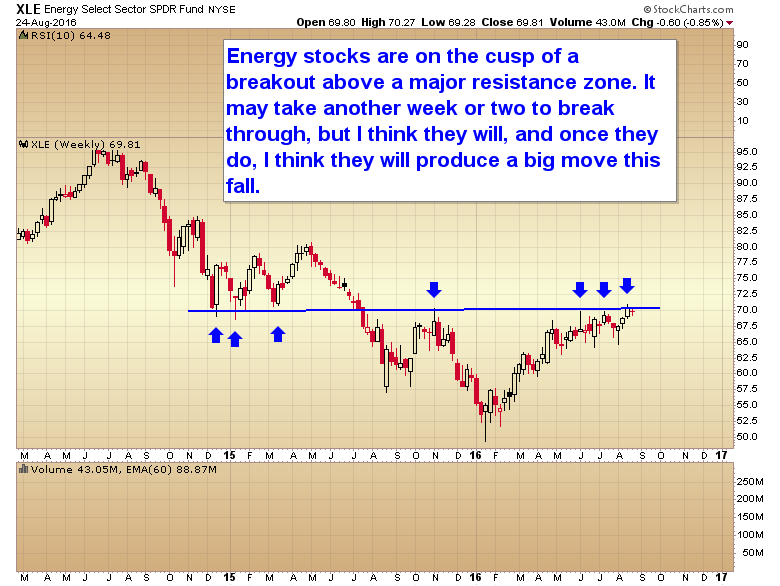 Most professionals trade regression to the mean strategies. So should you.

Nasdaq – No Bubble Yet

Nasdaq has a nice steady climb higher, with price staying modestly above the 200 week moving average. No sign of the spike indicative of a bubble yet. 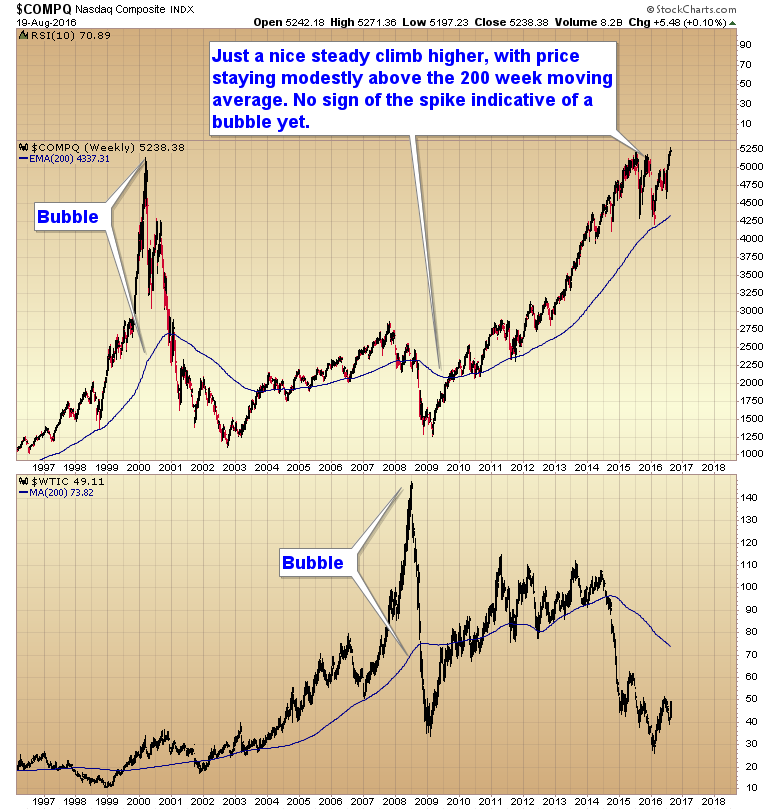 For the last 6 years I’ve listened as the bear sites talk down the economy. I have to say this is the most ridiculous nonsense I’ve ever heard. Do these people even bother to go outside and see what’s happening?

For the last two months I’ve been on vacation touring a big swath of the western United States and I can tell you that in every single town I’ve gone through there are help wanted signs in virtually every window. Big towns and little towns, the story is the same. The economy is accelerating, if not booming.

I predicted this would happen over a year ago. When everyone was quoting the shadow stats nonsense of 20% unemployment, I was saying at the time it was crap. If you think the government fudges the numbers, John Williams at Shadow Stats is 10 times worse than the government ever thought about being. Let’s face it, bearish news sells. And these sites are not in the least bit interested in publishing the facts. They are interested in creating attention by continuously predicting the end of the world.

I anticipated that we would get multi-year cycle lows in everything this year, and that’s what happened. The economy didn’t turn down on any ridiculous 8.6 year economic cycle. If anything it turned up. We don’t have, and are not going to have deflation. It’s virtually impossible to have deflation in a purely fiat monetary system as long as central banks are willing to expand the monetary base indefinitely. Is it any wonder why these people continue to scratch their heads and wonder why oil isn’t going down driven by the “fundamentals”. Duh catch a clue, the fundamentals have already reversed. The market has already looked into the future and seen that the global economy is accelerating again, and demand is going to overwhelm supply by next year. Folks quit looking in the rear view mirror.

When everyone was predicting the US Dollar was going to 110 or 120 I was one of the very few who noticed that the August 2015 low had dropped below the March 2015 low. Then the May low this year the dollar dropped below the August low. That set off all kinds of warning bells. The dollar was making lower intermediate lows. If the dollar was going to 110 or 120 then it had no business making lower intermediate lows. Something was wrong. I’ll tell you what was wrong. The dollar had started a bear market with a classic double top, and the euro a bull market with a classic double bottom. Again, you have to pay attention to what is actually happening. Quit listening to these analysts that sound convincing but clearly have no clue what is going on. The euro is not collapsing and Europe is not falling apart. Quite the opposite, Europe is coming out of recession and the entire global economy is going to rebound in the years ahead.

When everyone was calling for a bear market in the stock market, I was one of the few calling for new highs. There is just no way stocks can enter a bear market without the economy rolling over into recession, and clearly the US was not even close to a recession. And just as I predicted the market recovered and now we have a breakout to new highs.

This is exactly what should happen during an inflationary phase, and make no mistake we are entering an inflationary phase over the next 4-5 years as all the global QE comes back to bite us in the ass. Seriously, did anyone really think that the world could just print trillions and trillions of currency units and nothing bad would happen? Or that it would somehow create deflation?

Sometimes I wonder if there is any commonsense left in the world.

Deflation: what a joke!

We are having one of the best years in a long long time, because I correctly anticipated that we were starting an inflationary phase. Folks, it’s time to tune out the perma bear nonsense and get on board with reality. And the reality for the next several years is that printing trillions and trillions of currency units is going to create inflation in virtually all asset classes.