At this point there’s no more doubt that the bitcoin bubble has popped. It’s approaching 50%. Again let me say this has nothing to do with fundamentals. During every bubble traders will be able to make a case for why much higher prices were warranted. But bubbles aren’t about fundamentals. They are about human emotions. And no matter what the fundamentals are when emotions take over and the public floods into an asset pushing price to the moon in a parabolic rise there’s only one outcome. At some point price just can’t stretch any further and people start to sell. Traders that bought in late quickly see their profits go up in smoke and they start to panic as well. Then as the parabola starts to go into melt down everyone starts selling.

I warned several times that bitcoin was exhibiting all the signs of a mature vertical phase.

Price was stretched unsustainably far above the 200 day moving average.

And the general public was flooding into the market convinced that they had found a riskless strategy to get rich quick.

There should be some kind of bounce soon. That is the bounce that traps everyone for the final ride down as trades make the mistake of assuming price is recovering. But once the bubble has popped there is no recovering so the bounce fails and then the second leg down begins and traders finally realize in horror what is happening.

Maybe at some point crypto currencies do have a place in modern society other than just as a ponzi scheme to speculate on, but it always takes years to recover from a bursting bubble so don’t expect a return immediately.

This is your chance to learn. During the vertical phase of a bubble when price is going to the moon you have to at some point decide you’ve made enough and just get out. This is the only way to survive a bubble. You simply have to develop the ability to control greed and at some point be satisfied. I think you are going to need the ability next year in the stock market and again sometime in the next 3-5 years in the precious metals market. As both probably have a date with a bubble phase. If you can learn to control greed you will have the opportunity to make a lot of money in both markets. If not then you are going to suffer the fate of bitcoin traders who stayed just a little too long and got caught when the music stopped. 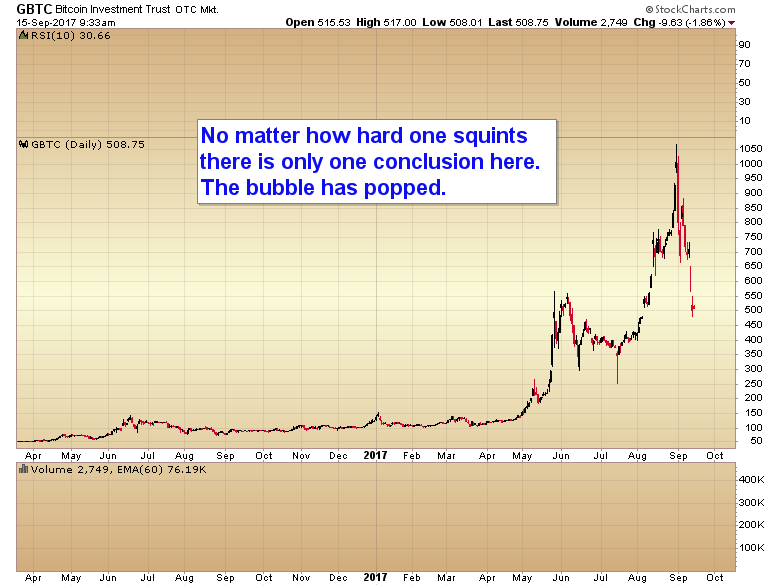